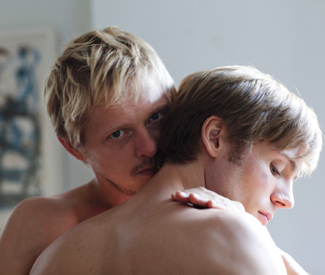 FILM In Ira Sachs’ intensely discomfiting Keep the Lights On, Erik (Thure Lindhardt) is a Danish documentarian in late-1990s New York City, prodding his career along, spending time with friends, having casual sex with strangers. One of the latter is Paul (Zachary Booth), a publishing-house lawyer who first tells him “I have a girlfriend, so don’t get your hopes up.” Yet some time later they’ve become a tentative couple, then a live-in one.

Erik is patient and easygoing, but Paul has secrets and problems all the more difficult to deal with because he denies, hides, or lies about them. He disappears for days at a time, then turns up wrecked. Crack is just the addiction we see; there are evidently others. Erik tries everything — group interventions, rehab, endless attempts at frank conversation that invariably turn into Paul accusing him of being unreasonable — but nothing sticks. On some level, Paul doesn’t want to be saved; drugs are like a bad old boyfriend he can’t help keep going back to, when not crawling back to the current one for forgiveness.

It takes Erik a decade to come to terms with, and extricate himself from, a relationship in which all his best efforts only bring torment, grief, and exasperation. “I have no idea who you are, I have no idea what you’re doing,” he cries during one argument. “I don’t know why you’re focusing on me,” Paul snaps, instinctively trying to shift the blame. Near the end, he questions out loud if Erik ever loved him — the fact that he isn’t doing what Paul wants that very second somehow negating years of sacrifice and worry that could only have been sustained by love.

Keep the Lights On is the kind of excellent movie a lot of people don’t like: it’s not just depressing in the sense of having downbeat, difficult subject matter, it actually sets out to be unpleasant and succeeds. There is a point to that. Leaping forward a couple years at a time, leaving us to figure out how things have shifted in the interim, Sachs’ script (co-written with Mauricio Zacharias) induces in the viewer the disoriented helplessness of dealing with a loved one who can’t or won’t tell the full truth — it’s his best defense.

The film’s somewhat squirm-inducing intimacy comes naturally, as the writer-director lived this story, however much it’s been tweaked into fictive dramatic form. “Paul” is a stand-in for a long-term boyfriend who wrestled with similar demons while somehow sustaining a high-profile career in the publishing industry. (He’s also since written a couple of memoirs about his addiction struggles, though despite that public self-exposure, the film still “created a wedge” between them, according to Sachs.)

“I think all of my films are autobiographical — I only feel excited to tell a story when I’ve lived an experience and have some analytical understanding of what took place,” Sachs said while in San Francisco for the movie’s screening at Frameline 2012.

Still, Lights is clearly a more jarringly personal project than his unsettling coming-out tale debut The Delta (1996) or the Sundance prize winner Forty Shades of Blue (2005), let alone 1950s heterosexual infidelity seriocomedy Married Life (2007). Nonetheless he now “sees them all as the same film — they’re all about people arriving at a point where they’re comfortable with who they are.”

Saying that he himself was “uncomfortable with who I [was, up] until the events in this film,” he now lives “an open life” with husband Boris Torres, a painter whose work is seen under the opening titles. “That’s a consequence of work I’ve done on my own,” Sachs said. “I really feel that secrets almost killed me. It’s very empowering to claim your secrets. I intended to make a film about shame and to do so shamelessly.”

In some ways, “this film is less about addiction than obsession, which is a very comfortable place for many of us to be — it cuts out the rest of the world and narrows the challenges. It’s very addicting to engage in this kind of relationship.” Some nonexploitative but explicit sexual content made Lights hard to cast (one major agency told him not a single one of their actors were “available”), but wound up with bilingual rising star Lindhardt. It’s an extraordinary performance that carries the whole film; by contrast Booth, to the frustration of some reviewers, plays a character deliberately kept somewhat furtive and unknowable.

While making Keep the Lights On afforded Sachs a cathartic way to “free myself from inhibitions around the story itself,” the consequence has been that “in the aftermath of these events I chose to live an honest life, and the result is that the dishonest and illicit is less interesting to me. So having made four films about deceit within a romantic relationship, that is no longer how I live or a story I’m interested in telling.”

He says his next project will be “about a 30-year relationship based on love and complexity between two men who decide to get married at ages 60 and 70.” Lights also pays homage to gay elders: Erik is working on a documentary about real-life photographer and filmmaker Avery Willard (whose still little-known work comprises “a visual anthropology of gay life in New York from the ’40s to the ’90s”), and the score consists of slippery songs by Arthur Russell, the enigmatic cult cellist-composer who died of AIDS 20 years ago. *

KEEP THE LIGHTS ON opens Fri/14 in Bay Area theaters.