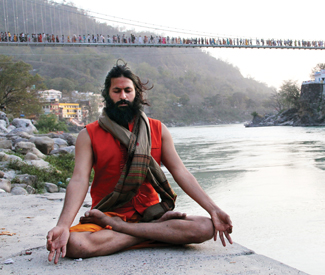 FILM It’s easy to make fun of religion — particularly this election year — but when people aren’t trying to kill or control one another over it, it’s best to leave the subject alone. Why begrudge anyone whatever makes sense of the world for them, or gives comfort when in need?

All the major prophets — let’s exclude those who self-appointed themselves to the job within the last 150 years or so — had very useful things to say. It’s not their fault if some contemporary followers distort their teachings or choose only to emphasize the parts concerned with “thou shalt not do this,” “go smite that,” etc. For most people, religion is a balm, not an incitement. A strident atheist calling believers idiots can seem just as insufferable as a fundamentalist certain you’re going to hell.

Ergo, just as there was a certain bullying pride of snark that made Bill Maher and Larry Charles’ Religulous (2008) more mean-spirited than necessary, the new Kumaré leaves a sour, smug aftertaste. Raised in New Jersey by a first-generation immigrant family of Hindus, Vikram Gandhi proclaims himself a skeptic who started out wanting to make a documentary about the opportunistic charlatans one can find passing as spiritually enlightened gurus in both India and around the booming US yoga industry. “I wanted to prove to others looking for answers that no one is more spiritual than anyone, that spiritual leaders are just illusions,” he tells us.

A noble impulse. Yet somehow this took the form of growing his hair and beard out, wearing saffron robes, adopting a Kwik-E-Mart Apu accent, and posing as Sri Kumaré, a fresh-off-the-boat guru who arrives in Phoenix, Ariz. to open up shop as a one-stop spiritual guide for the gullible. He asks “Could people find the same peace in a made-up religion that they would in a real one?” But too often the real question here seems to be “How silly can I make these chumps look while starring in my very own nonfiction version of The Love Guru?”

Actually the comedy Kumaré has been primarily compared to is 2006’s Borat, another Larry Charles joint (Charles was, unsurprisingly, solicited for some input on this new film), and one as hilariously subversive as Mike Myers’ 2008 flop was just dumb. But as unhappy as their portraiture in Borat made its duped participants, it was hard to feel sorry for them — given enough rope they gladly hung themselves expressing racism, homophobia, sexism, and sheer Ugly Americanism.

But those who fall under Kumaré‘s farcical spell don’t deserve to be exposed and ridiculed. They aren’t even, it seems, the kind of trust-fund folk with “white people’s problems” and too much time on their hands one finds represented in most New Age circles. They’re just people with real-world issues — financial struggles, low self-esteem, empty-nest loneliness, etc. — looking for somebody to tell them what to do. Of course they could tell themselves; the answers aren’t that mysterious. But a voice of authority always provides motivation. After all, something like “You could lose some weight” sounds very different when a doctor says it, as opposed to your own nagging inner voice.

Using nonsense chants and rituals he’s invented, giving himself a silly backstory, Gandhi duly magnetizes followers who take the bait and then some, attributing him with radiating light, energy, bliss, and healing. He’s called “a living embodiment of the divine;” one woman gushes exposure to him “changed my DNA!” When he says things like “I am the biggest faker I know,” it’s assumed he’s talking about some deep reality vs. illusion stuff. Ha ha.

With his earnest narration attempting to soften the snideness of the joke, Gandhi claims to have realized he’s connected with people more deeply as Kumaré than he ever did as himself. And several acolytes really do appear to benefit, making life changes for the better. When finally does his big “unveiling,” revealing his true identity, some actually applaud him for underlining that the real guru is the one inside each of them.

But what about the others who leave, furious or humiliated? We don’t hear their reactions, or find out how the woman who confided on camera to “Kumaré” about her family’s rampant sexual abuse feels now that her revelations are preserved in the context of a comedic hoax. Gandhi’s slick feature never feels more staged than when he’s supposedly alone, looking pensive and guilty over the possible consequences of his ruse — a performance of conscience that’s as disingenuous as anything here.

KUMARÉ opens Fri/7 at the Roxie.