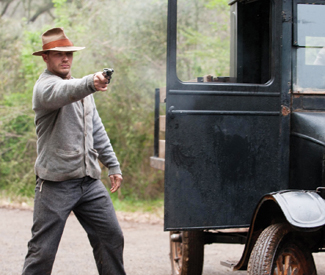 FILM The much-abused Malvolio in Twelfth Night is far from a great man, but he makes the definitive statement about greatness: that some are born with it, some achieve it, etc. Option number three, however, doesn’t really work for movies. No film has ever successfully had greatness thrust upon it, at least not by its maker. Yet every year there are a handful that seem to be handing themselves golden statuettes in every self-consciously majestic frame.

This often happens in the organized-crime-epic genre, where The Godfather (1972) cuts a grandiose figure many are inclined to imitate. Generally speaking, the more strenuous the aspiration, the more strained the results. In recent years Gangs of New York (2002), Road to Perdition (2002), and American Gangster (2007) have gone for the gold and come up tinsel. These aren’t bad movies, exactly, but they commit the sin of behaving as if their sprawl were iconic and tragic rather than derivative and overblown. Everyone should always set out to make the best art (or entertainment) they can; deciding from the get-go that you’ll cough up a classic, however, tends to backfire.

Now there’s Lawless, which has got to be the most pretentiously humorless movie ever made about moonshiners — a criminal subset whose adventures onscreen have almost always been rambunctious and breezy, even when violent. Not here, bub. Adapting Matt Bondurant’s fact-inspired novel The Wettest County in the World about his family’s very colorful times a couple generations back, director John Hillcoat and scenarist (as well as, natch, composer) Nick Cave have made one of those films in which the characters are presented to you as if already immortalized on Mount Rushmore — monumental, legendary, a bit stony. They’ve got a crackling story about war between hillbilly booze suppliers and corrupt lawmen during Prohibition, and while the results aren’t dull (they’re too bloody for that, anyway), they’d be a whole lot better if the entire enterprise didn’t take itself so gosh darned seriously.

Yes, the Bondurant brothers of Franklin County, Va. are considered “legends” when we meet them in 1931, having defied all and sundry as well as survived a few bullets. Mack-truck-built Forrest (Tom Hardy), in particular, is rumored to be “indestructible,” and has fists that create a Dolby sonic boom whenever they hit an unfortunate face. Eldest Howard (Jason Clarke) just tipples, follows orders, and smiles a lot. “Runt of the litter” Jack (Shia LeBeouf), however, has a chip on his shoulder, and between his whining, impulsiveness, and bad judgment, you know he’s going to cause everyone a lot of grief trying to prove himself. He is to stoic, all-seeing Forrest what Casey Affleck’s “coward” wannabe was to Brad Pitt’s fabled bandit in 2007’s The Assassination of Jesse James by the Coward Robert Ford — another cinematic wade into American outlaw mythology by Australians, albeit one infinitely better than Lawless.

The local law looks the other way so long as their palms are greased. But things change when the Feds send Special Deputy Charlie Rakes (Guy Pearce), a sneering, effete sadist demonstrating how you can get away with a despicable gay stereotype today so long as you include a scene where he’s with a woman (whom he’s abused). Needless to say, it’s an eye for an eye for an eye, etc. from that point on.

Hillcoat and Cave have collaborated a long time, on music videos as well as the 1988 prison cult flick Ghosts … of the Civil Dead and 2005 Australian Western The Proposition. That last was pretentious too — in exactly the way of one of Cave’s glowering psuedo-traditional death ballads — but summoned up the necessary shocks and weight to pretty well pull off its own prairie Guignol classicism. Since then Hillcoat directed (and Cave scored) 2009’s The Road, a Cormac McCarthy adaptation that was probably bound to fall short, and did, though not for want of trying.

The revenge-laden action in Lawless is engaging in a way The Road couldn’t be, though the filmmakers are trying so hard to make it all resonant and folkloric and meta-cinematic, any fun you have is in spite of their efforts. Among the big cast, only Hardy manages to inject some humor — he makes Forrest’s taciturn inarticulacy a joke about strong-and-silent machismo — and Pearce is ingeniously horrible. But everyone else seems to be playing stock figures lifted from better movies, especially (and predictably) the women. Mia Wasikowska plays an absurdity (the sheltered product of a religious sect who’s nonetheless all worldly badinage when courted by LeBeouf’s Jack), while Jessica Chastain’s Chicago b-girl refugee is costumed and lit so she’s like Jean Harlow in a Dorothea Lange photo, a laughable incongruity.

Needless to say, the rural Depression era is in other ways so exquisitely realized you can never quite believe it for a moment, from the location choices to the soundtrack Cave has laden with original songs with names like “Fire and Brimstone.” The latter create a sort of tasteful-downer equivalent to the O Brother, Where Art Thou? (2000) album (using some of its contributors). It’s pretty, but still an imitation of authenticity. Lawless proves you can’t curate blood and thunder.