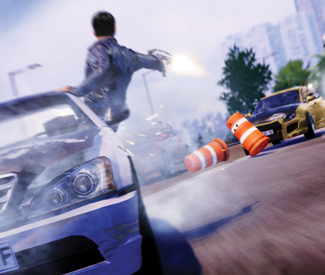 FALL ARTS At some point in the last 30 years game publishers decided that releasing in the summer was financial suicide. Maybe these publishers were under the mistaken impression that everyone is out enjoying the sun and, I don’t know, hiking? But as those of us who also enjoy gaming will tell you, you make time for video games.

So it’s been a pleasure to see the fall gaming season inch ever earlier into August, where it can leverage gamers’ anticipation about autumn releases and avoid being subjected to the intense scrutiny of a more competitive schedule. Two games released last week teeter on that precipice and officially ring in what looks to be another big season of gaming.

Darksiders II is a tad rough but an immense undertaking for a still-unproven license. Playing as Death himself, you must undo the end of the world and save your brother, one of the Four Horsemen of the Apocalypse. Dabbling in light heaven-hell mythology, the art style of Darksiders II is vigorously heavy metal, but it’s the game play homages to Zelda, God of War, and even Portal that make this epic game a pleasure. Dungeons and puzzles are faintly familiar but that’s part of the charm, and the series’ new RPG elements and abundance of treasure chests make the game irresistibly fun to play.

Similarly rugged, Sleeping Dogs sometimes struggles to match the fluidity and detail of Rockstar’s best efforts, like Grand Theft Auto and Red Dead Redemption, but it’s also not nearly as self-serious and has one of the best open-world environments the genre has seen. In this sandbox game set in Hong Kong, you play an undercover cop working his way up the ranks of the triads, playing both sides of the law. In terms of sheer delight, few games this year can match the unique experience of cruising through a neon city listening to traditional Chinese string music while vendors call to you to try their pork buns. And then running them over with your SUV.

Of course, the months of true autumn are still where you’ll find the big titles, and it’s impossible to list upcoming games without acknowledging that there is another Call of Duty game coming out this November, and it will undoubtedly sell more copies than any other game in 2012. The first sequel from odd-year, back-up developer Treyarch, Call of Duty: Black Ops II occurs partly in the Cold War era and partly in the near future, where the PRC have taken control of US revolutionary drone warfare technology and are using it against us.

In lieu of a new Battlefield game, publisher Electronic Arts hopes a new Medal of Honor will fill the shooter-sized hole in their schedule this year, but Medal of Honor Warfighter seems unlikely to compete with Black Ops, considering the player reaction to its 2010 prequel.

No, the Call of Duty franchise’s nearest competitor this year is 343 Studios’ Halo 4. It’s been five years since the last numbered entry in the Halo series and a new developer aims to repeat the mammoth sales of Halo 3 (a game with such crossover appeal that I picked up my copy at 7-11) with another blockbuster. Halo 4 will once again star iconic space soldier Master Chief, and promises a renewed focus on exploration and discovery over straightforward alien bombast.

Fan favorite Resident Evil has slowly evolved from its deliberately-paced survival horror roots into an action series — resulting in both uproar and increased sales. And we all know which result matters more to publishers. But in an effort to satisfy fans new and old, Resident Evil 6 has two protagonists, and for all intents and purposes two separate storylines. One plays it slow and scary while the other delivers on the explosions and firefights that likely mean big sales this October.

Another series that developed a new identity based on fan feedback, Assassins Creed III brings the time-traveling franchise to the USA during the American Revolution. Playing as a Native American assassin, you hobnob with the likes of George Washington and Thomas Jefferson in a dynamic recreation of 18th century Boston and New York. You’ll probably also murder a lot of redcoats. Like Call of Duty, Assassins Creed has a new entry each year, and its dependable quality is its greatest asset.

Then there are games whose futures are less certain. New IP Dishonored looks to take BioShock’s steampunk aesthetic one generation earlier, into the Victorian era, with a stealthy first-person-shooter soaked in atmosphere. Borderlands 2 takes its predecessor’s successful basic characteristics — a boatload of loot, focus on cooperation and tongue in cheek humor — and ratchets them up to 11. Also, releasing in the typically untouchable month of December, Far Cry 3 explores an entire tropical island, complete with psychedelic mushrooms and a very nasty pirate villain.

All of the above for the new season, without even touching Nintendo’s new Wii U. We know it’s coming, but no release date, price, or game lineup yet. It wouldn’t surprise me to learn that Nintendo’s slow approach to starting the next generation of hardware may be a case of wanting to fully size up the competition before committing. With games like these, it’s never been clearer that people crave good games above new hardware.