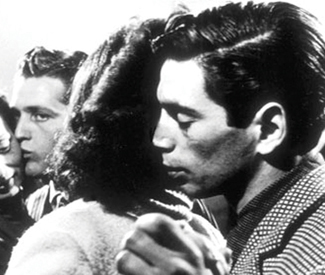 FILM After World War II, the hitherto miniscule U.S. market for foreign language films slowly opened up, partly due to G.I.s returning home curious about the countries they’d been stationed in. But mostly it was because bold new voices in European cinema were delivering a new realism that could be sold (even when cut by censors) as more “shocking,” “frank,” and “shameless” than anything Hollywood would hazard for years yet.

While Sweden, France, and other nations would soon catch up, the first to make a significant impact was Italy, whose artists chronicled the ruination it had to recover from after Axis defeat. Italian Neorealism, as the movement came to be called, looked like nothing else before it; even rare social-issue documentaries had been heavily doctored and sanitized by comparison. Reacting against the increasingly incongruous glamour of studio films made as war and Mussolini’s government wreaked havoc, the neorealists (largely film critics turned makers, as with the French New Wave a decade later) eschewed soundstages and trained actors for the real world. Lines between fiction and nonfiction were willfully blurred.

Leading neorealist films (which fast influenced American film noir and other genres) made a splash. That happened thanks to (or in spite of) misleading adverts for movies that were far from sexy: 1945’s Rome, Open City (resistance fighters caught, tortured, and killed by Gestapo), 1946’s Shoeshine (poor kids scapegoated by corrupt cops, thrown in prison), 1948’s The Bicycle Thief (desperate father and son lose the vehicle that provides their threadbare subsistence), 1952’s Umberto D. (old pensioner gets sick, evicted, suicidal). All these were directed by Roberto Rossellini or Vittorio De Sica, the first star neorealists.

By 1953 Italian cinema was moving on. It had begun to export bombshells (Silvana Mangano from 1949’s Bitter Rice, then Sophia Loren and Gina Lollobrigida); soon would come the sword and sandal epics and international co-productions that would make Rome a crazy hive of commercial filmmaking. Neorealism was on its way out, but as a brand it still had familiarity and a certain market appeal. Ergo a “second generation” of directors were introduced via Love in the City (1953), a recently restored six-part omnibus feature opening for a week at the San Francisco Film Society Cinema (side note: SFFS’s residency at Japantown’s New People ends August 31; the organization plans to shift its fall programming to various local venues).

It isn’t a great film so much as a great curio, and a crystal ball forecasting where the local industry would be head for the next 20 years or more. Little of that was immediately apparent, but just months later Federico Fellini (the sole director here who’d already made several well-received features) would cause a sensation with La Strada (1954). The others, including Michelangelo Antonioni, would eventually follow with breakthroughs of their own. The two surviving today are still active — in fact Francesco Maselli and Carlo Lizzani just contributed to a new omnibus feature last year.

Introduced as “a journal created out of film rather than pen and ink” — love being the topic of its first (and last) “issue” — Love in the City announces its “Raw! Revealing! Shocking!” intentions with Lizzani’s psuedodocumentary opening “article,” a series of interviews with alleged prostitutes. The next similarly surveys women driven to attempted suicide. While the style is as yet unidentifiable, the subject of profound, despairing alienation amid the crowd could hardly be more apt for young Antonioni.

Things lighten up considerably with a delightful set piece of amorous shenanigans in a divey dancehall, demonstrating the wry observation that would make Dino Risi one of Italian cinema’s greatest comedy directors. Fellini’s equally bemused vignette finds a young reporter investigating a matchmaking agency for a humorous story sobered by the plight of the poor, earnest would-be bride he meets.

These breezy episodes are followed by the most devastating. Maselli’s Story of Caterina, co-written by De Sica’s scenarist Cesare Zavattini, follows its plain, forlorn heroine (Caterina Rigoglioso) from bad to worse — impregnated and abandoned, she can neither return to the Sicilian family that’s disowned her or work legally in Rome to support her toddler son. The extremes to which she’s driven are bleakest tragedy.

Even the most frivolous of these segments capture the realities of urban poverty with unblinking authenticity. As if acknowledging that so much realism might be bad for the digestion, Love in the City ends on its silliest (and sole upwardly mobile) note. Future Mafioso (1962) director Alberto Lattuada’s The Italians Turn Their Heads finds all Roman mankind neck craning to leer at a procession of pretty women in tight modern fashions, each granted their own distinct lounge-music theme by composer Mario Nascimbene — thus silencing the chorus of wolf-whistles that would have been their real-life soundtrack.

LOVE IN THE CITY