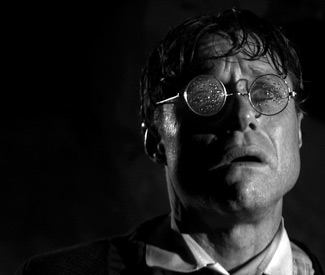 TRASH The movies had barely begun when adaptations of Edgar Allan Poe stories began appearing onscreen. However, that author’s closest inheritor, H.P. Lovecraft, sparked no interest from the medium until a good quarter century after he died in 1937 at age 46, a death as premature following a life by all accounts as miserable as his predecessor’s. Were his macabre tales too lowbrow (having been published in pulp-fiction magazines like Weird Tales) or just too grisly for film treatment until literary respectability and audience tolerance for graphic horror caught up with them?

That initial neglect has been more than made up for, especially in very recent years: according to one source there have been over 70 Lovecraft derived features and shorts since 2000 alone. Most of these have been very free with their source material; many are pretty bad in the usual way of cheap horror knockoffs. But Lovecraft’s bizarre ideas survive updating fairly well (if not his racism, which the movies seldom touch), and there have been interesting spins like the gay-angled Cthulhu (2007), U.S. indie Pickman’s Muse (2010), Alien (1979) writer Dan O’Bannon’s Shatterbrain (1992), multinational omnibus Necronomicon: Book of the Dead (1993), or John Carpenter’s relatively big-budget In the Mouth of Madness (1994).

The Roxie hosts a Lovecraft double bill Thu/2, offering up two of what are considered the all-time best adaptations to date. Points for extra faithfulness go to the filmmakers of The Whisperer in Darkness, which plays first (and also screens Fri/3 at the Rafael Film Center). But then you might expect special attention to fidelity from the H.P. Lovecraft Historical Society, which produced it last year. You might not expect that attention to extend as far as not only keeping the original short story’s 1930 origin as its setting, but making the film in the style of a black and white early “talkie.” (The Society’s prior film venture, the sub-feature-length The Call of Cthulhu, was based on a tale written in 1926 — so that 2005 enterprise, which plays alongside Whisperer Fri/3 in Marin, is a silent film.)

Tangentially related to the Cthulhu mythology that defined the author’s last decade of activity, Whisperer in Darkness articulates his favored theme: that mankind and its emphasis on scientific logic are pitifully ill-equipped to fathom the otherworldly forces truly shape our hapless destiny. Professional skeptic and professor of folklore Albert Wilmarth is drawn by a late colleague’s strange notes and a farmer’s desperate letters to rural Vermont, where locals believe “monsters” have been abducting their kin since settler days. Many a strange thing occurs before Wilmarth realizes the truth about a “strange colony” in the nearby hills and the alarming cult-like control it exerts over human followers.

Blackly humorous, slow-moving in the cinematic style of another era (things don’t really pick up until after an hour has passed), detailed in its aping of “Golden Age” Hollywood tropes, Whisperer is pulp sci-fi horror of an amusingly camp stripe. Despite content a tad grislier than any 1930s film would have allowed, it’s not far from the thrilling serials that entertained kids at matinees back then.

Striking a very different tone is Stuart Gordon’s From Beyond (1986), the second Roxie feature. The sleeper success of Gordon’s feature debut Re-Animator the prior year had occasioned this second loose Lovecraft adaptation, which would be far from his last — there would follow Castle Freak (1995), Dagon (2001) and a 2005 Masters of Horror episode. All are good, but Beyond is especially, deliciously berserk.

At the outset research assistant Crawford Tillinghast (Jeffrey Combs) has finally, semi-accidentally made Dr. Pretorius’ “Resonator” machine work — but its stimulation of the pineal gland opens a portal between this world and the next that is addicting and dangerous, with results that see the doc dead and Tillinghast committed to a prison psych ward. The latter is sprung, however, by Dr. McMichaels (Barbara Crampton), who returns him to the scene of the crime (accompanied by Ken Foree’s cynical cop) to find out what really happened. Unfortunately, the Resonator soon appears able to turn itself on, literally and figuratively — experiencing one endless “orgasm of the mind,” pervy Pretorius re-materializes again in grotesque form, as eager to mingle pleasure and pain with his unwilling visitors as Hellraiser‘s (1987) considerably less horn dogging Pinhead.

Luridly lit in shades of hot pink and turquoise, From Beyond doubtless would have shocked Lovecraft himself (who was from all evidence vehemently disinterested in sexual matters) with its MPAA-challenging mix of icky lasciviousness and ickier mutational gore. It’s one of those rare films that starts out near climax and just keeps building toward ever greater plateaus of tasteless glee. *

“AN EVENING WITH H.P. LOVECRAFT”

The Call of Cthulhu and The Whisperer in Darkness