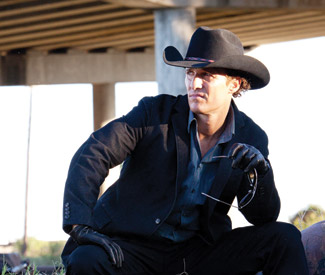 FILM Like many directors who emerged in the 1960s, William Friedkin started out in television before trying his luck on the big screen. Between 1967 and 1970 he directed four films from which it was difficult to perceive anything beyond a rather wild flexibility.

Two were offbeat quasi-musicals — Good Times (1967), a mod skit-based showcase for Sonny and Cher, and retro burlesque homage The Night They Raided Minsky’s (1968) — while two were vivid if inescapably stagy adaptations of plays by Harold Pinter (1968’s The Birthday Party) and Mart Crowley (groundbreaking 1970 gay drama The Boys in the Band).

Then Friedkin made two enormously popular movies that defined his career, and helped define the early 1970s as an era of unusually adventurous mainstream Hollywood product. The French Connection (1971) was an electric police thriller with a thuggish cop hero (Gene Hackman); it was both familiar as a genre piece and fresh as something harsher, more deeply cynical than before. Then there was 1973’s The Exorcist, a bona fide pop culture phenomenon that scared the pants off millions and somehow drained supernatural hocus-pocus of its usual comforting, campy silliness.

Suddenly Friedkin was a king of the New Hollywood. But four years later Sorcerer, his striking remake of 1953 French suspense classic Wages of Fear, was a disastrous, costly flop. The crown was revoked.

Hardly alone among directors of his generation, he went back to projects that seemed seldom of his choosing — some on TV, some beleaguered by studio or other inference, all hit-and-miss in both critical and popular appeal, none equaling the triumphs of his peak moment. Most have their defenders (I’ll take 1987’s Rampage; you can keep 1980’s Cruising), though not all — 1990’s The Guardian was about a sexy murderous ancient tree spirit, a subject fit perhaps for Apichatpong Weerasethakul but not for a mainstream American horror film.

After a couple biggish action movies, it seemed a step down for him to be doing Bug (2006), a claustrophobic stage adaptation with falling star Ashley Judd, never-was Harry Connick Jr., and as-yet-little-heard-of Michael Shannon. But while Bug had its limits as a psychological quasi-horror that perhaps belabored its narrow concept a bit too far, you could feel the cracking recognition of like minds between cast, director, and playwright Tracy Letts.

The latter two are back in Killer Joe, which was a significant off-Broadway success for Letts in 1998 (and more recently for Marin Theatre Company, in a production that transferred to the Magic Theatre), paving early road to the 2008 Pulitzer for August: Osage County. That last is quippily updated, three-act dysfunctional family “well-made play” par excellence, with Meryl Streep duly on board for the movie somebody else (not Friedkin) is making.

Killer Joe is its bastard cousin — short, violent, bracing, with no assurances that anything, let alone everything, will turn out all right in the end. Once again Friedkin gets the ghoulish jet-black-comedic tone just right, and his actors let themselves get pushed way out on a limb to their great benefit. (We’re informed that Gina Gershon suggested Popeye’s fried chicken be served after a recent promotional screening, an inside joke you won’t appreciate until you’ve seen the film, but one suggesting she is a very, very good sport.) It’s very NC-17, a nasty piece of narrative work just soberly presented enough to trouble you with the similarities to old yokelspoitation like Tobacco Road (1941), Poor White Trash (1957), and Shanty Tramp (1967) — rather than let you dismiss outright it as just a more graphically cruel update of the same.

The Smith clan of Texas may pass many things from generation to generation, but brains are not among them. The current dimmest-bulb end product is Chris (Emile Hirsch), a yelping young fool whose solution to his temporary homelessness and a bungled drug deal is murdering the mother who just threw him out to collect her life insurance money. This scheme doesn’t particularly bother his pa, equally slow Ansel (Thomas Haden Church), or the latter’s somewhat sharper albeit slutty second wife Sharla (Gina Gershon). But none are capable or courageous enough to pull off such a stunt themselves, so an outside party is enlisted in the form of Joe (Matthew McConaughey), a corrupt police detective slash hit man for hire.

“Killer” Joe enters the Smith family mobile home like he owns it, cutting through their fumbling promises and excuses with bored, bullying impatience. When it becomes clear these yokels can’t possibly come up with his required $25,000 deposit, he announces he’ll accept as retainer the temporary possession of Dottie (Juno Temple) — Chris’ younger sister, an untouched innocent so wide-eyed she almost seems mentally deficient — with aforementioned to be forfeited entirely should they fail to come through.

Needless to say, almost nothing goes as planned, escalating mayhem to new heights of trailer-trash Grand Guignol. Things get fugly to the point where Killer Joe becomes one of those movies whose various abuses (physical and otherwise) are shocking enough to court charges of gratuitous violence and misogyny. Unlike the 2010 Killer Inside Me, for instance, it can’t really be justified as a commentary upon those very entertainment staples; Letts is highly skilled, but those looking for a message here will have to think one up for themselves.

Still, Friedkin and his cast do such good work that Killer Joe‘s grimly humorous satisfaction in its worst possible scenarios seems quite enough. He’s never been a moralizing director; The French Connection, The Exorcist, and Sorcerer remain great in part because they stare into spectacular voids with clinical, nonjudgmental fascination.

This latest is a more artificially contrived piece, but it still hits Friedkin’s sweet spot, with his actors more than rising to the occasion. In particular, McConaughey brings a snake’s cold-blooded sinuousness to the role of the most lethal weapon here. Coming on the heels of Bernie and Magic Mike, two movies in which he made deft fun of his own narcissism, this turn makes it a very good year for him — although Killer Joe is sure to be a little too much for awards notice, just as it is for MPAA tolerance.