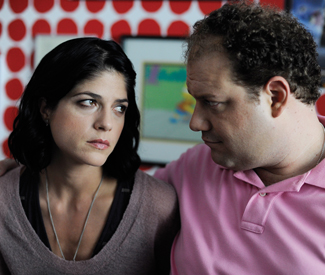 FILM Todd Solondz elicits a variety of responses, nearly all of them extreme, and nearly all reasonable enough. You can look at his work and find it brilliant, savage, challenging; or show-offy, contrived, fraudulent. The circles of interpersonal (especially familial) hell he describes are simultaneously brutal, banal, and baroque.

But what probably distresses people most is that they’re also funny — raising the issue of whether he trivializes trauma (rape, murder, child abuse, etc.) for the sake of cheap shock-value yuks, or if black comedy is just another valid way of facing the unbearable.

His dialogue is enjoyably snappy, in the sense that the cat doubtlessly enjoys the crunchy snapping of bones in the bird or mouse it’s caught (and which the fox then enjoys in the cat). He’s very good with actors — it’s not easy to draw fully dimensionalized performances from such grotesque material. But these strengths only further muddy the line he walks between a theater of cruel hyper-realism and facile, modishly mean-spirited satire.

After 17 years and six features (excluding 1989’s Fear, Anxiety & Depression, a tampered-with debut he’s disowned), it seems safe to say the truth is somewhere between. While variable, his films have stayed interesting despite their narrow thematic and stylistic range. Life During Wartime (2009), the “sequel” to Happiness (1998), had startlingly good sequences even as it dutifully handed more ammo to the naysayers. No matter how suspect his intentions, it’s difficult to shrug off the alarming punch in reptilian Charlotte Rampling’s pickup of Ciarán Hinds, his tense reunion with the son he’d molested, or Allison Janney’s whole portrait of a hapless “good” mother self-justifying one bad decision after another. It proved, at the very least, that Solondz hadn’t lost his edge.

That’s why Dark Horse is disturbing — because it isn’t, in his usual way, and because it’s such a slight, inconsequential, even soft movie by his standards. This time the sharp edges seem glibly cynical, and the sum ordinary enough to no longer seem unmistakably his.

It opens at a wedding reception, always a ghastly ordeal for single people who figure themselves losers. In that regard, Abe (Jordan Gelber) would be right — he is a big fat loser, an obnoxious jerk of about 35 who still lives with his parents (Mia Farrow, Christopher Walken) and works at dad’s office, likely because no one else would employ him.

But Abe doesn’t exactly see himself as a loser. He resents and blames others for being winners, which is different — he sees the inequality as their fault. Spying Miranda (Selma Blair) at the reception, clearly miserable, he perceives someone whose self-esteem is so low she might lack the will or good sense to resist his awful personality when it’s forced upon her.

He’s right. Miranda’s self-loathing is such that after some bewildered and mortified initial resistance, she figures she … deserves him. In the interest of full disclosure, however, she airs some skeletons from the past, and these rattle Abe’s barricade of angry obliviousness. So does getting fired by his fed-up dad, being asked to move out, discovering something weird about the office secretary (Donna Murphy), and so forth. Plus there’s the eternal aggravation of being much less smart, handsome, and successful than his brother Richard (Justin Bartha), whom he thus blames for “ruining my life” — and who doesn’t even lose points with mom and dad for being gay! So unfair.

Dark Horse flirts with something interesting by letting these factors tear at Abe’s deniability until he starts suffering delusional episodes — ones in which people tell him exactly the truth about himself. (Farrow’s simpering voice has seldom been put to better use than a sequence in which her infallibly supportive mother uses just the same sugary tone to inform Abe he’s always been a waste of space.)

But Dark Horse is less of an ensemble piece than most of Solondz’s films, and in hinging on Abe, it diminishes his usual ambivalence toward flawed humanity. Abe is a buffoon, like a particularly unfunny Zach Galifianakis supporting character in a broad commercial comedy inexplicably given center stage in a low-key seriocomedy. The awful people in prior Solondz movies were also repellant, yet partly because we could perceive enough of their pathos to make them even more squirm-inducing. Abe has no pathos, or other redemptive qualities. He’s just an annoyance, one whose mental health issues aren’t clarified enough to induce sympathy. The director’s deliberately crap pop soundtrack choices and tritely ironic ending only further reduce these 86 minutes to a thin, overextended joke.

That’s disappointing for Solondz, though admittedly if Dark Horse were by somebody else its modest virtues might be more easily appreciated. In particular, the erratic Blair is excellent here — she digs into Miranda’s depression so deeply we marvel that the woman can still summon energy to walk and talk.