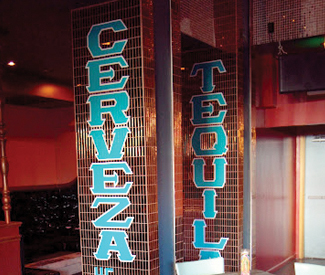 APPETITE Who needs menus when the bartenders are this good? The granddaddy of the speakeasy resurgence, New York’s Milk and Honey, has been doing the menu-less thing since 2000, while places like LA’s Library Bar get their inspiration from daily changing, farmers market produce. Two fascinating new SF bars are serving custom cocktails their own way, only able to go sans menu because of strong talent behind the bar. Reviewed online on the Guardian’s Pixel Vision blog is the intimate, amusingly named Big; here is my take on the other menu-less charmer, Rio Grande.

I’ve written about Bon Vivants (cocktail designers Scott Baird and Josh Harris, operations specialist and behind-the-scenes mover Jason Henton) numerous times over the years, from early days at 15 Romolo to recent cocktail menu creation at Berkeley’s new Comal. Anticipating their long-awaited Mission bar Trick Dog, I’ve been having fun in the meantime with multiple visits to Rio Grande, a bar they just launched as part of ATO (A Temporary Offering) in the Kor Group’s Renoir Hotel, a genius pop-up project where local entrepreneurs can test concepts, from FoodLab restaurants to shops and art events.

Using the hotel’s vacant, three-room space, revolving projects invigorate the stretch of Market near Seventh Street. Rio Grande is unlike any other bar in town. Evoking a South of the Border cantina, or what the Vivants dub “Tarantino and Once Upon a Time in Mexico meet border town roadhouse,” here funky kitsch glitz marries laidback ease, as tequila, mezcal, whiskey, and canned beer flow.

Under the gaze of Wild Turkey bourbon and Espolon tequila logos emphasizing the bar’s whiskey-tequila union, the ceiling sports a Virgin of Guadalupe shrine in front of a painting of 1970s adult film actress Vanessa del Rio, a Baird crush after whom he named the Del Rio cocktail (reposado tequila, fino sherry, St. Germain elderflower, orange bitters). The Del Rio will soon be served on tap, while the current on-tap cocktail is an Old Fashioned.

The bar was initially launched as a pop-up, in keeping with ATO’s rotating offerings, but the Renoir folks like it enough to try and find a way for it to stay. If it can’t, the Vivants will move it to various locales as a gypsy bar. Here’s hoping it remains while they launch other nomadic bars — a fine concept.

Rio Grande was, impressively, built out in three weeks: Henton says there were days they’d still be wielding power saws at 5:30am, building high-top tables or implementing one of Harris’ many estate sale-flea market finds. (He stalks local sales for vintage pieces like the bar’s fascinating ceiling fans and the cowhide splayed in the entrance. Harris even gathered Mexican national newspapers from 1945-’47 to became the wallpaper behind the bar.) The bar itself boasts a pole on either end for whatever shenanigans might ensue, while a mini-stage is set for live music. Even without bands, tunes are perfection: a little hard rock, a lot of classic country — think Waylon, Hank I and II, your general outlaw cowboy musicians.)

To exist sans menu, it’s crucial that bartenders be talented, knowledgeable and versatile. Rio Grande couldn’t be more on the right path with hand-chosen barkeeps Morgan Shick and Russell Davis, assisted by Trick Dog chef Chester Watson. Shick is one half of Jupiter Olympus, a bar-restaurant consulting company that throws some crazy, imaginative parties. I’ve judged a number of cocktail contests where Shick (who’s worked at bars from Marzano to Michael Mina) was an entrant: his sense of balance and ingenuity stand out every time. Davis, besides being named Nightclub and Bar’s 2012 Bartender of the Year, recently crafted a brilliant soda fountain menu at Ice Cream Bar and can be found actually igniting flames at Rio Grande for special cocktails.

According to Harris, the Vivants wanted “to take all the pretentiousness out of the bar scene and make it fun”, which is why Tecate and Dos Equis flow just as freely as Del Maguey. During my visits, I’ve sipped a mezcal and yellow chartreuse winner and a bitter amaro beauty on crushed ice (Julep snow cone-style). Speaking of ice, it’s hand-cut here, a pleasure to watch. During one visit, Shick made a mezcal, grapefruit soda drink accented with crème de cassis (black currant liqueur), lime, Luxardo Maraschino liqueur, and salt: smoky, salty and citrusy. Spiced fall notes shine in his mixture of Siete Leguas anejo tequila, made with Averna for a tinge of bitter balance, Angostura orange bitters, sweet vermouth and apple brandy. I’m in love with a finish of Old Bardstown bourbon, Nocino walnut liqueur, Balcones’ rum-like Rumble (made from Texas wildflower honey, Mission figs, turbinado sugar), plus dry vermouth and triple sec. Dry, sweet, full, it’s still bracing enough to put hair on your chest.

“Watch for some potentially interesting surprises musically,” says Harris of the tiny stage, and for Tarantino Tuesdays, when Tarantino films and soundtracks accompany your pour.