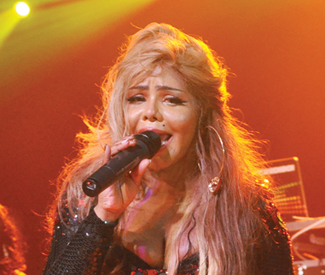 MUSIC “You wanna be this Queen Bee, but ya can’t be. That’s why you’re mad at me.” That was one of many audacious lines delivered by a much younger Lil Kim in her beautiful, black, Brooklyn accent on Hardcore, her raunchy debut album from 1996.

Now coming up on her 38th birthday, she just returned to the stage at San Francisco’s Mezzanine earlier this month; her performance not only had hip-hop fans who missed out asking, “How was the show?,” but also, “How did she look?”

Followers of the Geneva Diva’s career know these past 16 years since her debut LP dropped haven’t been easy. Sure, she’s released three more albums and got a Grammy for the Lady Marmalade remake, but rougher times saw her spend about 12 months in the slammer on perjury charges, and she’s been widely criticized for accusations of having undergone plastic surgery (photos may prove that point, and BET credits her as being one of the first hip-hop stars to have work done to their face).

Still, the fact remains, Kim loves her fans in SF, and the feeling is mutual. Appearing more youthful compared to some of the recent botched looking photos, Kim wore a crispy-looking blonde wig — perhaps extensions, whatever — and not surprisingly donned a skimpy sequined black and red ensemble that accompanied her backup dancers’ (I guess I’ll call them militant) looks. Think Rhythm Nation Janet, but scantily clad. Somehow she still had it goin’ on.

Four opening acts wore on the patience of a large number of feisty ladies in the audience. My photographer was even shoved for allegedly stepping “all over” the shoes of one particularly pushy woman’s sister. It was after midnight when Kim finally took the stage for a set that lasted little more than an hour. There she did her thing, delivering a rapid fire, foul- language trip down memory lane from rap’s pre-Auto-Tune era.

She always had a way with words and while they did grab our attention through shock value, I’ve always felt she didn’t receive enough credit for lyrical merit. Instead we focused attention on looks and her beefs with fellow female rappers (although that often made for great subject matter). To this day, these are still the kind of lyrics that can make you cringe.

Take for instance these slickly-delivered rhymes from “Queen Bitch” and “Not Tonight”, both deserving of gold medals: “Got buffoons eatin’ my pussy while I watch cartoons.” Now there’s a visual. And who can blame her for wanting to speak out for fed up ladies who were unsatisfied in the sack? “I don’t want dick tonight. Eat my pussy right.” Well said.

“We Don’t Need It” is physiologically forthcoming in its call and response about what to lick, suck, and stroke, even advising to “work the shaft”. Elsewhere on the album she may be acting pseudo-psychological when she wonders: “What’s on ya mind?”, while that certain someone goes downtown.

Because hip-hop’s golden age had previously been male dominated, the timing was right for someone like Kim to pave the way, bringing in some say from the female perspective, especially with how she pointed out there’d be no such thing as a free fuck anymore.

It’s true the Biggies, the Puffies, and the Jay-Zs were all instrumental in Lil Kim’s success, but now it’d be tit for tat, so to speak, and it couldn’t have been pulled off without a pioneer like her — who was willing to take sexually charged content to a new, and quite frankly ridiculous, level of filth.