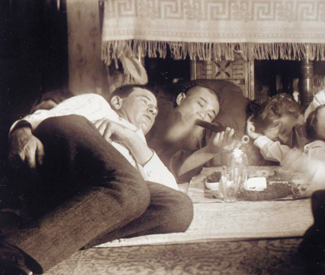 LIT In the early pages of his new memoir, Steven Martin admits he’s obsessive. This is not uncommon, he explains, for collectors — not to be confused with the dilettantes he calls “gatherers.” Serious hobbyists hunt down highly specific items, fervently scrutinize them, and then evangelize to whoever’ll listen about their findings.

This kind of behavior can manifest around just about anything that people collect: Civil War artifacts, Depression glass, Beanie Babies. San Diego-born Martin became fascinated with Asian culture at a young age; after a stint in the military, he ended up living in Bangkok. A few decades later, he’s chronicled his adventures thereabouts in Opium Fiend: A 21st Century Slave to a 19th Century Addiction (Ballantine, 396 pp., $26).

Yep: as unlikely as it sounds, he became hooked on opium. If you thought what Martin calls the cause of “the world’s first real drug epidemic” vanished along with the Model T — well, you’d mostly be right. Opium Fiend, which is crammed with plenty of historical information as well as Martin’s first-hand experiences with the drug, explores how an obsessive interest in antique opium-smoking paraphernalia — a formerly obscure thing to collect, at least until Martin’s own photo book, The Art of Opium Antiques, came out in 2007 — led to, perhaps inevitably, a full-blown dependence on opium itself.

He’s clean now; in the first chapter, he discusses the gruesome agony of detoxing. Later, one of his close friends, a fellow addict, doesn’t survive the experience. It’s a sobering moment in a book that, though clearly a cautionary tale, propels forward with the particular energy of someone who’s really, really stoked to share his story.

“Some people watch movies or sports, but my favorite past time is seeking out and studying whatever I happen to be collecting at the moment,” Martin says. “When I got serious about collecting opium-smoking paraphernalia, around 2001, I realized there was just nothing really out there about it. I took it as a challenge to collect as much as I could, and learn as much as I could about it.

“It had this outlaw chic about it that was interesting. But it also seemed to have this really odd juxtaposition — you have these beautiful, finely-crafted pieces of art, made from the best materials a century or so ago: jade, silver, or ivory. Really, really strikingly beautiful. But in actuality these things were instruments of self-destruction. It’s a bit dark, but I found that appealing.”

Though he’d dabbled in smoking even before he began building his trove of implements, he did not expect to become a raging addict — mostly because he didn’t think becoming an opium addict was even physically possible.

“Most of the research that I did was coming from Victorian-era accounts of what opium smoking was like. I was very skeptical of what these books said. The tone was often very shrill, almost like a Reefer Madness kind of thing, so I didn’t take it as seriously as I should,” he says. “But opium’s not like these modern drugs we hear about, a one-hit-and-you’re-hooked-for-life sort of thing. It can take months — or in my case, years — to develop a serious addiction.”

And “opium tends to rebuff the amateur,” Martin says. “People often try it once and never try it again. But I happened to be in a place where it was possible to get opium that was processed specifically for smoking, which is actually a misnomer. The paraphernalia that’s used is designed to vaporize the drug, not burn it.”

For the curious, Opium Fiend describes the actual experience of smoking, including the specific feelings associated with the high (tranquil, but “it turns you inward,” says Martin; he took detailed notes daily, even at the height of his addiction) and the preparation required to achieve the highest-quality result. It’s a delicate, time-consuming process, but for Martin that was part of the thrill.

“For me, that was the best part. I was really hooked on the ritual. Once I’d actually learned to prepare the pipes myself, that became my favorite source of entertainment: lying there next to the opium layout, within the glow of the opium lamp, watching myself prepare pipe after pipe. It was just mesmerizing,” he says.

“I’d be lying if I didn’t say I miss it very much. Sometimes I’ll have these very vivid dreams about smoking, and I’ll wake up in the morning, lying on my left side, in the same position I used to smoke in. It’s crazy — even though I’ve quit, it won’t leave me alone. I think about it all the time.”