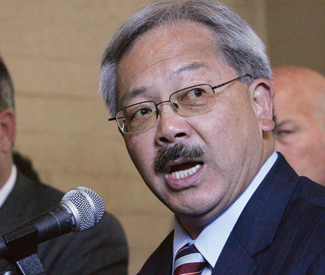 For all the lawyers, investigators, witnesses, politicians, and political appointees involved in Mayor Ed Lee’s official misconduct case against suspended Sheriff Ross Mirkarimi, this case is ultimately a battle between these two politicians, who come from rival ideological camps — and have a lot riding on the outcome of their clash.

And this week, both Mirkarimi and Lee are expected to take the witness stand and face tough questioning from each other’s attorneys.

These first two rounds of live testimony before the Ethics Commission — which has been painstakingly setting up procedures for its inquiry, defining its scope, and making myriad rulings on what evidence and witnesses to allow — could be the emotional high point of hearings likely to drag on throughout the summer.

On June 28, after the commission finishes ruling on the admissibility of evidence — dealing mostly with the controversial testimony of Lee’s star witness, Ivory Madison, the neighbor who triggered the police investigation that found Mirkarimi had grabbed his wife’s arm during a Dec. 31 argument — Mirkarimi is expected to take the stand.

Given the tacks taken by each side so far, the deputy city attorneys representing Lee will likely try to ask Mirkarimi a broad array of questions about his actions and their wider implications, while his attorneys will seek to limit the line of inquiry to what they see as the narrow question of whether he committed specific acts of official misconduct.

“They’re going to want to blast him with every single issue they can conjure up,” said Mirkarimi attorney Shepherd Kopp. But he thinks the Ethics Commission “will limit it consistent with how they’ve been ruling on our objections,” which has already greatly limited the case that Lee sought to present.

The next day, Lee is scheduled to take the stand, with Mirkarimi’s attorneys planning to question the mayor about why he didn’t conduct an investigation or seek more input from witnesses or former mayors before demanding Mirkarimi’s resignation and suspending him without pay in March.

“The suspension was not done carefully with the best interests of the city at heart. It was a rash political decision that had little to do with the facts,” Mirkarimi’s other attorney, David Waggoner, told us.

Indeed, the city didn’t begin gathering evidence until after the charges had been filed, and since then Lee and his team haven’t been able to unearth much evidence in support of his most damning allegations that Mirkarimi tried to dissuade witnesses and thwart the police investigation, something that Mirkarimi and his attorneys have adamantly denied. In the absence of that evidence, Waggoner said Lee has stepped up his efforts to defame Mirkarimi publicly.

Lee told reporters on June 19 that he suspended Mirkarimi because he was “beating his wife,” seeming to escalate the characterization of a single arm-grabbing incident. The city has also released the video that Madison made of Mirkarimi’s wife tearfully recounting the incident and the couple’s text messages, which made Mirkarimi look bad but don’t offer much new information or evidence.

“He’s panicking. The ship is going down and he’s beginning to flail,” Waggoner said of Lee’s recent statements and actions. “The more the mayor uses that kind of rhetoric, the less credibility he has.”

We sought responses and comments from the press secretaries for Lee and the City Attorney’s Office, but both refused to comment for the record.

Ethics Commission Chair Benedict Hur has taken an increasingly strong role in running the hearings and limiting the ability of either side’s attorney to control them. At the June 19 hearing, he cut off Deputy City Attorney Sherri Kaiser at least twice when she tried to offer unsolicited comments, at one point causing her to get visibly agitated and declare, “I’m objecting to the procedures for objecting to evidence.”

But Hur didn’t relent or modify his approach, telling her, “We are trying to conduct these proceedings in a fair and expeditious way.” Waggoner praised the way Hur has run the hearings so far: “I think he’s been fair in his rulings and how he’s conducted the process.”

After this week’s pair of hearings, the Ethics Commission is scheduled to reconvene its inquiry on July 18 and 19, when it will likely hear from Madison, whose testimony could make or break the case. But first, attorneys for each side are meeting this week to decide where they can agree to limit Madison’s testimony, with the commission making rulings on realms where the two sides differ. Deputy City Attorney Peter Keith has previously said he expects Madison to face tough questioning in which her credibility will be attacked, but the commission itself has already criticized her written declaration and greatly limited her hearsay accounts of life in the Mirkarimi household (see “Ethics Commission undercuts the main witness against Mirkarimi,” June 20, SFBG.com Politics blog). And Kopp told us, “If I get most of my objections sustained, I may not need to cross examine her, as fun as that might be.”