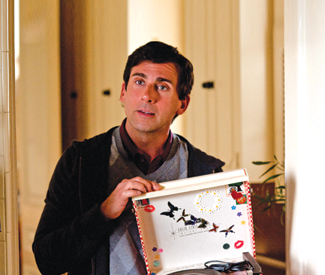 FILM Being a movie star is a precarious business. It seemed very good news when The 40 Year Old Virgin (2005) made Steve Carell one after years of very good work as a sketch comedian and supporting player (and with years of The Office to come). He was smart, funny, personable, and versatile. But Little Miss Sunshine (2006) and the animated Despicable Me (2010) aside, movies have been trying to pound his round peg into a square hole ever since. Evan Almighty (2007), Dan in Real Life (2007), Get Smart (2008), Date Night (2010), Dinner for Schmucks (2010), Crazy, Stupid, Love (2011) — there are worse lists (see: Eddie Murphy, Adam Sandler), but each failed him and its audience in some way. At this point he seems just a few more flops away from re-entering the network sitcom world.

Seeking a Friend for the End of the World won’t help. A first directorial feature for Lorene Scafaria, who’d previously written Nick and Norah’s Infinite Playlist (2008) — another movie dubiously convinced that sharing its Desert Island Discs equals soulfulness — it’s an earnest stab at something different that isn’t different enough.

Specifically, it’s a little too similar in premise to the 1998 Canadian Last Night (which wasn’t all that hot, either). But the problem is more that Scafaria’s film isn’t anything enough — funny, pointed, insightful, surprising, whatever. Lars von Trier’s Melancholia (2011), for all its faults, ended the world with a bang. This is the whimper version.

An asteroid is heading smack toward Earth; we are fucked. News of this certainty prompts the wife of insurance company rep Dodge Peterson (Carell) to walk out — suggesting that with just days left in our collective existence, she would rather spend that time with somebody, anybody, else. A born self-defeatist, he accepts this rejection as proof of total failure in life. So while the multitudes go nuts with apocalyptic fervor — partying, fucking, weeping, etc. — he anticipates quietly crawling toward the hereafter on a business-as-usual schedule.

Public hysteria turns from giddy to violent, however, and rioting vandals force Dodge to flee his apartment building. By now, however, he has acquired two strays: A mutt he names Sorry (after the terse note its owner left in surrendering custody) and professedly “flaky, irresponsible” neighbor Penny (Keira Knightley), who’s just broken up with her useless boyfriend (Adam Brody) and missed the last available planes to England, where her family lives. She decides she must reunite Dodge with the long-ago love of his life — an event that could have happened months ago, had the mail carrier not delivered that woman’s flame-rekindling letter by mistake to Penny’s mailbox, and if she hadn’t simply forgotten to slip it under his door.

Thus ensues a tepid road-trip dramedy of episodic encounters with interesting actors — William Petersen, Martin Sheen — primed to shine in better material than they get. (One fresh if hardly slam-dunk sequence has comedian T.J. Miller as the host at Friendly’s, a chain restaurant where “everyone’s your friend,” perhaps because its orgiastically inclined staff seems to be “rolling pretty hard” on Ecstasy.) Needless to say, however, Carell and Knightley’s odd couple connects en route.

Except they don’t, in the chemistry terms that this halfway adventurous, halfway flatlined film ultimately, completely depends upon. Carell’s usual nuanced underplaying has no context to play within — Dodge is a loser because he’s … what? Too nice? Too passive? Has obnoxious friends (played early on by, in ascending order of humiliation, Rob Corddry, Patton Oswalt, Connie Britton, and Melanie Lynskey)?

His character’s angst attributable to almost nothing, Carell has little to play here but the same put-upon nice guy he’s already done and done again. So he surrenders the movie to Knightley, who exercises rote “quirky girl” mannerisms to an obsessive-compulsive degree, her eyes alone overacting so hard it’s like they’re doing hot yoga on amphetamines. It’s the kind of role, conceived to be dithering-helpless-eccentric-charming, that too often plays instead as annoying. Knightley makes it really annoying. She’s certainly been capable before — and might yet be in Joe Wright’s forthcoming Anna Karenina, scripted by Tom Stoppard. Here she’s so forcedly over-agitated she sucks life from scenes in which she never seems to be acting with fellow cast-members, but rather with line-feeders or a video monitor. It’s an empty, showy performance whose neurotically artificial character one can only imagine a naturally reserved man like Dodge would flee from.

That we’re supposed to believe otherwise stunts Scafaria’s parting exhale of pure girly romanticism — admirable for its wish-fulfillment sweetness, lamentable for the extent that good actors in two-dimensional roles can’t turn passionate language into emotion we believe in.

SEEKING A FRIEND FOR THE END OF THE WORLD opens Fri/22 in Bay Area theaters.