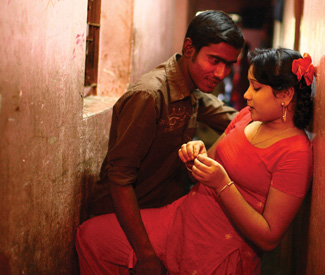 FILM Austrian writer-director Michael Glawogger’s narrative features include several comedies, which you wouldn’t necessarily guess from viewing his internationally better-known documentaries — in particular the “globalization trilogy” that began with 1998’s Megacities and continued with 2005’s Workingman’s Death. The first was a global survey of desperate lives on economic bottom-rung, from heroin-addicted NYC con artists to homeless Moscow beggars to sewer scavengers, slaughterhouse laborers, extensively pawed strippers, and so forth. The second was another look at modes of survival no one would choose, if they had a choice, from tapped-out Ukrainian coal mines to abandoned freight ships that Pakistanis risk their lives mining for scrap.

Constantly drawn to the ugly and wince-producing, these films nonetheless had a certain abstract grandeur wrought from cinematographer Wolfgang Thaler’s striking images and the director’s purist refrain from any external commentary. They were also criticized in some circles for questionably staged sequences, and for creating a sort of pornocopia of picturesque suffering halfway between Koyaanisqatsi (1982) and Mondo Cane (1962).

Now Glawogger and Thaler are back with their final panel in the series. The two-hour Whores’ Glory is itself a triptych, this time limiting itself to one profession — the world’s proverbial oldest — as it portrays life and business in three prostitution districts around the world. The services performed may (or may not) be the same, but the ways of conducting trade, and the attitudes toward it, are very different.

In Bangkok’s upscale enterprise “Fishtank,” the invariably young, slim women sit behind a glass partition to be checked out by customers until their number is called; the very non-PC comments uttered on either side go unheard on the other. Employees clock-punch in and out of work, have their own on site beauty parlor, and shrug “A job is a job.” Indeed, they seem more like unusually good-looking office temps than anything else, and are treated as such in an atmosphere of well-scrubbed corporate capitalism.

Faridpur, Bangladesh’s “City of Joy” area, by contrast, is a slum whose professional denizens are quarrelsome, foul-mouthed, high-drama, and often look well underage. Though primly clad by Western standards, they labor under a heavy societal mantle of shame — several we meet arrived here after being “driven out” of multiple prior locations. Others were sold by their impoverished families into one-year contractual obligations that one suspects will drag on much longer. “The crazy girl” is forever wailing, older women hector younger ones, a lot of raunchy talk is heard (“I tell them Allah didn’t create my mouth for that purpose” is the least of it), and johns flee the camera.

Finally, “La Zona” in Reynosa, Mexico is home to older, hardened, philosophical women as frank as their cheerfully horny customers. It’s a falling-down-drunk party scene in which one customer allows himself to be filmed in the act, while a retired sex worker describes a particular specialty she used to perform with an ice cube (“They bleat like goats”). The men curse and complement the women in the same breaths, Madonna-whore complex operating at maximum speed; one guy cruising around in a truck works himself into such a froth just discussing the local talent that you wonder if he’ll dirty-talk himself to climax. Yet there’s a forlorn quality to it all — even when a pro proclaims “I’m paid for it, I enjoy it. I’m paid to have fun,” the surroundings suggest she’s making the best of a deal that didn’t come with any better alternatives.

As usual Glawogger allows no overt commentary or judgment in another immaculately packaged object d’verite, this one sometimes a little too chicly scored to chill room tracks by CocoRosie, PJ Harvey, and such. More than its predecessors, though, Whores’ Glory could have used a little editorializing, or at least contextualizing. Is it even desirable to artfully yet passive observe this of all trades, so frequently rife with exploitation and complex moral issues? Raising myriad questions it’s too aesthetically clean to hazard addressing, the film becomes less an inquiry into than a scrapbook of prostitution ’round the world — a duty- (as well as STD-) free form of sex tourism for anthropologically inclined First Worlders. *