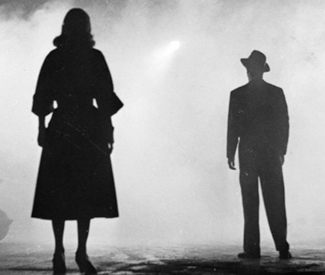 FILM The word that comes to mind when thinking of Elliot Lavine’s semiannual film noir programs at the Roxie is inexhaustible. With 30 films packed into 14 days, “I Wake up Dreaming” wisely takes a pass on questions of noir’s quintessence in favor of open-ended research into the mutations and paroxysms of mid-century malaise.

There’s no mistaking genuine masterpieces like The Big Combo (1955) and In a Lonely Place (1950), to say nothing of a still unfathomable crossover work like Detour (1945), but Lavine’s series conspires to induce the genre delirium that first inspired the French critics to call a noir a noir. In spite of the preponderance of dead ends and blind alleys, there’s always a trap door leading into the next movie. So this time around we get Shadow of Terror (1945) rather than Reign of Terror (1949), The Underworld Story (1950) instead of Underworld U.S.A. (1961), Killer’s Kiss (1955) instead of The Killers (versions 1946 or 1964) or Kubrick’s own follow-up The Killing (1956), Shoot to Kill (1947) instead of Born to Kill (1947). Chronologies matter less than interchangeability. You watch Lee Van Cleef’s icy professional in opening night’s The Big Combo (sparkling in a 35mm restoration by UCLA) return as a foaming killer in closing night’s Guns, Girls, and Gangsters (1959). His kind never has time to develop a character on the margins of these already marginal films, but with repetition comes iconography.

John Alton’s rhapsodic cinematography threads four of this year’s selections (The Big Combo; 1948’s Hollow Triumph; 1947’s The Pretender; 1944’s Storm Over Lisbon; and 1948’s He Walked By Night). In the famous finale of Joseph H. Lewis’ The Big Combo, which audaciously sets out to improve upon 1942’s Casablanca‘s even more famous conclusion on the tarmac, the plot seems to exist primarily for the lighting. Cops emerge out of the fog and Jean Wallace’s trophy girl freezes Richard Conte’s sociopath in a spotlight — as pure an effect as anything in F.W. Murnau and in this case providing a perfect echo of an earlier scene of killing as silence rather than light.

Nicholas Ray and Val Lewton protégé Mark Robson lead Saturday’s bill with message movies impugning society’s guilt for a young man’s sins. As with many of the era’s social problem pictures, miles of speechifying script and awkward narrative frames make Knock on Any Door (1949) and Edge of Doom (1950) tough going if still interesting in the particulars. Knock on Any Door is timid next to Ray’s subsequent study in juvenile delinquency, Rebel Without a Cause (1955), but there are premonitions of what’s to come in those moments when the director fully engages his actors’ bodies: when Humphrey Bogart’s world-wary defense lawyer hauls Nick “Pretty Boy” Romano (John Derek) into a back alley to reclaim a debt, for instance, and in the passage when Romano’s wife slumps against the stove after he blows for a robbery. You’re so focused on her balletic movement to the floor that you hardly notice that she’s reaching for the gas.

There’s a similar fascination to Farley Granger performance as a loose cannon in Edge of Doom, lashing out at a world that doesn’t forget about money even when you’re trying to bury your poor mother. As in Ray’s indelible They Live by Night (1949), Granger’s palpable insecurity makes him a key figure for the melancholy shading of noir anxiety.

Prolific director Edward L. Cahn’s Guns, Girls, and Gangsters is the kind of red meat B movie that manages some genuinely weird flourishes in spite of its undeniable limitations as a factory-line commodity. The Vegas heist plot is barely motivation for Mamie Van Doren’s curves, and the film itself blends right in with the roadside motels and cheap nightclubs. It’s a particularly egregious offender in the redundant voice-over category (“It was a moment of great tension for Wheeler”), but then Van Cleef shows up — fresh out of prison with Mamie on the mind. The sight of him lurking outside a motel window at night in his sunglasses is something to remember. Van Doren may be the “merchandise,” as her character says, but Van Cleef conjures noir’s actual libido: leering, desperate, and unpredictable.

The same cheap thrills that Cahn serves up with gusto come under close scrutiny in Stanley Kubrick’s Killer’s Kiss: here we find pulp as object d’art. Made when Kubrick was 27, the film emulates its Times Square setting in its barrage of perceptual jolts — like a Weegee photograph sprung to life. Plenty of noirs delineate capitalist degradations of the city, but rarely with a cleanness of line as the sequence in which Kubrick cuts between a man being prepped for the boxing ring and a woman making herself up for her nightshift as a dancing partner.

It’s all so much meat in Kubrick’s unsparing view, and one might add here that the rain of footsteps trailing down a New York canyon is more eloquent than any of the human dialogue (call it an anti-social problem picture). Kubrick acts as his own cinematographer, making great use of his chops as a magazine photographer to scavenge bitter ironies from street locations. His editing knocks things further lopsided, revealing only mirrors where you expect to find character. You know the hour is late watching Killer’s Kiss and The Big Combo, both of them released in 1955 and both advancing a self-conscious apotheosis of the style in the ruins of its bygone glamour — in a word, modernism.

“I WAKE UP DREAMING: THE FRENCH HAVE A NAME FOR IT!”