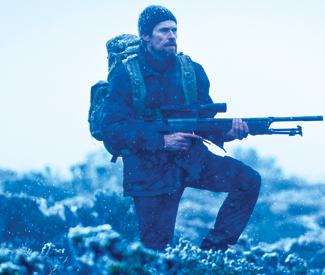 FILM The Tasmanian tiger wasn’t a cat at all, but a pouched marsupial resembling a ring-tailed dog, with the most fearsome steel-trap jaws imaginable. It was hunted out of existence as a menace to domestic livestock; the last one died in captivity in 1936. Nonetheless, alleged sightings persist. Like Bigfoot and the Loch Ness Monster, the tiger is kept alive at least in the imagination by the fervency of stubborn believers.

The search to prove something now-mythological to be true and extant is always a good hook for fiction. Julia Leigh’s 1999 novel The Hunter is a cool, precise yet ambiguous story — the kind that you’d classify as a “thriller” if it weren’t so pointedly detached — about a lone-gun mercenary of sorts hired by a biotech conglomerate for a top-secret mission. He’s to stalk, kill, and extract DNA of potential great pharmacological value from a last Tasmanian tiger which, purportedly, has duly been sighted.

The chimera of the tiger and its moral weight as yet another sacrifice to corporate greed interests Leigh less than the enigmatic hunter himself, a damaged soul whose past is off-limits (even to the reader), and who’s long since walled himself off by a highly efficient, methodical guardedness both professional and emotional. The current job is his exclusive focus; if someone has to be killed to ensure its completion, he won’t revel in the task, but neither will he hesitate.

His focus is disrupted, however, not just by the hostility of local loggers who assume he’s one of the tree-hugging “greenies” who obstruct their employment, but by the very messy circumstances of the household he’s forced to bunk in between outback treks. Eventually the latter demands his engagement beyond the call of duty, a lowering of self-protective reserve. But Leigh is much less comfortable with that humanizing material; her novel is most at home alone in the wilderness, suiting a protagonist who’d rather avoid contact with others of his species if he can help it.

Leigh is an interesting talent. But on the basis of that first novel, her second, Disquiet, and last year’s debut film Sleeping Beauty — which stirred controversy at Cannes because it centered on a woman who lets men have sex with her when she’s drugged unconscious — or was it because there was disagreement whether the film was more shocking than it was cold and boring? — it’s a good thing she didn’t write or direct the Hunter movie. Daniel Nettheim did both, and he’s been faithful to the source while ultimately creating a much more involving, powerful experience. Like its hero, this Hunter does what Leigh couldn’t, or wouldn’t: it realizes the value of compassion.

Willem Dafoe’s Martin — in the book he doesn’t even have a name — travels incognito to a remote area, posing as an academic researching Tasmanian devils. (That large rodent-like animal is still very much alive, albeit endangered.) Expecting ordinary accommodations, instead he finds himself staying at the hippie-ish abode of a family in crisis. The husband was an actual environmental researcher who disappeared in the woods a year ago, quite possibly killed by those antagonistic loggers. Since then his wife Lucy (Frances O’Connor) has been in a medicated stupor of grief, rarely getting out of bed, leaving their young children — assertive Sass (Morgana Davies) and apparently mute-by-choice Bike (Finn Woodlock) — to fend for themselves. Against all his instincts and professional ethics, Martin finds himself pulled into their obvious neediness.

Nothing else about The Hunter is obvious, though. Some may find it too short on back story, mystery resolution, or genre definition. (Like the book, it’s almost an action thriller.) But from the story’s spare bones Nettheim has built a narrative about overcoming isolation and adversity that is aptly chilly for a while yet finally very moving. The actors, also including Sam Neill as a local of uncertain loyalties, are economically perfect. The diverse Tasmanian scenery is both spectacular and somber in Robert Humphreys’ widescreen photography. The only element too conventional at times is the musical scoring, although it suits the final turn in emotional urgency beautifully.

Confusingly, this Hunter arrives not long after an Iranian film with the same title, one also having much to do with alienation and wild landscapes. That film was very good, but this one might be indelible.