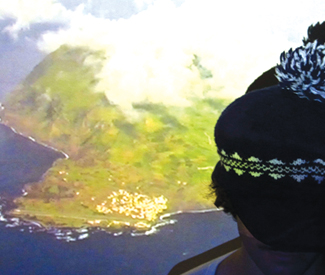 SFIFF How to account for the desire for difficult terrain that runs through so much contemporary art cinema? Exploring the margins and crevices of what’s readily visible is just what good filmmakers do, but extremes have become commonplace. The irony that these far-flung films live on in the cosmopolitan vapors of the festival circuit cannot be lost on the filmmakers themselves. Remoteness may be a relative matter, with patience revealing islands everywhere, but inaccessible landscapes nonetheless guide a handful of interesting features showing at this year’s San Francisco International Film Festival.

The bourgeois couple stripped bare by vacation is a standby of modernist cinema, with Roberto Rossellini’s Viaggio in Italia (1954) still the gold standard and Maren Ade’s Everyone Else (2009) the best in recent memory. Julia Loktev’s The Loneliest Planet is an almost classical work in this mode. An engaged couple (Gael García Bernal and Hani Furstenberg) hire a local guide (Bidzina Gujabidze) to lead them through the magnificent Georgian steppe, and so the psychological roundelay begins. Fraught staging, language difficulties, Gerry-rigged tracking shots, and significant pocks in the Caucasus landscape are all worked out with great expertise but little verve.

Where The Loneliest Planet draws on landscape to reveal repressed instincts, Ulrich Köhler’s Sleeping Sickness drifts towards further occlusion. Joseph Conrad’s Heart of Darkness is the obvious reference point, though here it’s a black European who pursues a white man gone native. In the film’s first half we watch as rueful Dr. Ebbo Velten (Pierre Bokma) prepares to leave Cameroon’s lush danger with his wife and daughter. The imminent departure emboldens him to accuse the local authorities of bilking international aid donors for a nonexistent sleeping sickness crisis. Then Alex Nzila (Jean-Cristophe Folly) arrives in Cameroon to evaluate the medical program and finds Velten changed: he’s in a business partnership with a man he openly despised in the first half of the film, and we hardly hear any mention of his European family. Berlin School director Köhler works displacement as a figure of psychology, politics, and narrative and smartly uses the international aid question as a frame to plunge deeper mysteries of identity.

Conrad is a significant presence in The Rings of Saturn, the peripatetic novel by W.G Sebald that’s also the focus of Grant Gee’s suitably oblique documentary portrait. Patience (After Sebald) offers astute commentary on the moods of Sebald’s prose from thinkers like Adam Phillips, Robert Macfarlane, and Tacita Dean, though Gee succumbs to the spectacle of Google Earth mapping of the novel and some decidedly sub-Sebaldian spiritualism. Still, hearing the author speak his own mind on Virginia Woolf’s moth and the phenomenology of walking is worth the price of admission for fans.

Gonçalo Tocha eschews the Google’s eye view in It’s the Earth Not the Moon, his resplendent study of Corvo (the tiny northernmost island of the Azores, close enough to being in the middle of the ocean and a far outlier of European Union). Tocha and his sound man Dídio Pestana dropped anchor there to capture every face, bird, and rock on the island — a self-consciously grandiose goal with something of the 19th century about it. The film first approaches Corvo with statistical lyricism: dimensions, number of residents, number of roads, and so on. The notion that you could hold the entire island in your head at once is an illusion, of course, but a sustaining one. Corvo is an island such as you might have imagined as a child, which is not to say that It’s the Earth is innocent of the world. As economic math and electoral politics sweep the second part of the film, Tocha proves himself an inheritor of the French essay-film tradition of Chris Marker and Agnès Varda. The film’s three hours pass easily in the intimacy of encounter, but one still admires the desire to give the film experience some qualitative measure of being marooned.

Corvo’s aging population might well feel at home in the timeless Brazilian village of Found Memories, the fable of a young woman born in the wrong time coming to a community of people who have forgotten to die. Along with It’s the Earth and other SFIFF selections Palaces of Pity and Neighboring Sounds, Júlia Murat’s first narrative feature seals a particularly strong year of Portuguese-language films. She delineates time and space through routine, patiently unfolding characterization in the adjoining repetitions. Lucio Bonelli’s cinematography is beautiful work in itself, fearlessly embracing darkness and shadow (the rural village must have seemed like easy street after lensing Lisandro Alonso’s formidable landscapes). Found Memories doesn’t break the mold of slow cinema — its melancholy mingling of photography and myth is especially reminiscent of Manoel de Oliveira’s The Strange Case of Angelica (2010) — but a late passage of clipped post-punk demonstrates that Murat can handle a sudden swerve.

That leaves little space for Davy Chou’s assured debut, Golden Slumbers, and it deserves an article of its own. The remoteness we experience here is that of phantoms: Chou’s film excavates the thriving Cambodian cinema that was rubbed out by the Khmer Rouge. All that remains are fugitive traces of printed ephemera and soundtracks of curling orchestral ballads and psychedelic nuggets — and the memories of those people who made or relished the films and survived Pol Pot. Most of the films discussed in this article use offscreen sound to develop a sense of place beyond the frame, but Golden Slumbers is a special case, with the poverty of archival materials turned to an advantage as elegy. Chou’s gliding Phnom Penh interludes and spaciously staged interviews reflect the influence of Jia Zhangke and Tsai Ming-liang’s Goodbye, Dragon Inn (2003), but these cinephilic touchstones never overwhelm the personal, defiant accounts of moviemaking at the heart of the film. Ever after is the tragic refrain of Chou’s film, but the once upon a time is as golden as he says.