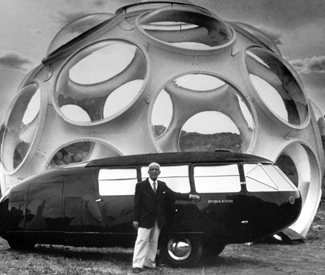 SFIFF R. Buckminster Fuller was born before the turn of the last century, and died before the start of this one. But place his philosophical and practical output next to any contemporary thinker, and something seems a bit off.

“He was totally out of sync with his time,” says SF-based documentarian Sam Green (2004’s The Weather Underground). “He was talking about green building in the 1930s or ’40s.”

You might know Fuller as the designer of the geodesic dome or the namesake of buckyball molecules, but Green, in conjunction with a new exhibit at the San Francisco Museum of Modern Art, is working to establish his reputation as a precursor to modern progressive-tech culture. On May 1, as part of the San Francisco International Film Festival, Green will regale audiences at the SFMOMA with a “live documentary” presentation, The Love Song of R. Buckminster Fuller, featuring a live score by Yo La Tengo.

The exhibit, “The Utopian Impulse: Buckminster Fuller and the Bay Area,” is already open, and features an installation called Buckminster Fuller and the Bay Area: A Relationship in 12 Fragments (inspired by the Dymaxion Chronofile), a collaboration between Green and SF projection-design firm Obscura Digital. The installation is a collage-like film projected on a sculpture inspired by Fuller’s “Dymaxion Map” of the world; the film is an exploration of Fuller’s maddeningly comprehensive personal archive, acquired by Stanford University in 1999.

“Fuller never built anything in the Bay Area, although he proposed a couple projects, and he never lived in the Bay Area, but his influence actually is pretty profound,” notes Green. “Especially on the counterculture, and specifically on the part of the counterculture that eventually morphed into early computer and Silicon Valley culture.” His drive to create efficient, waste-free systems through design and architecture inspired information technology as much as it foreshadowed the green movement.

So what makes Fuller anything more than just a fascinating mad scientist? “We’re not driving the [Dymaxion Car], and most of us are not living in domes or the Dymaxion House. So in some sense you could say he didn’t succeed,” admits Green. “But to me, what’s most relevant and most valuable about him really is that he was inspired to do everything he did by a belief that, through [better design], one could solve the problems of the world.”

“At the heart of all of his activities was a really simple idea, and he was saying this since the ’20s: there’s more than enough resources in the world so that everybody on the planet could have a very comfortable life,” Green muses. “And he really passionately believed that was possible. In some ways, to me, that’s the love song of R. Buckminster Fuller — love of humanity — which sounds a little corny but I really do feel like that was what drove him. He was a person of incredible energy and was on a mission for 50 years, and at the heart of it, I think, was that.”

This is Green’s second foray into the format he innovated with Utopia in Four Movements for SFIFF in 2010, which featured music by Brooklyn band the Quavers and is still touring around the world. “I’m charmed by the format and feel like there’s a lot of potential, a lot more I want to try with it,” Green says of this return to live documentary. “It also seems very appropriate for Fuller; he was somebody who was just a phenomenal speaker. So there seemed to be something about him that fit with this idea of a live documentary, the performative aspects of who he was.”

“It’s only through doing a live piece that you learn what works and what doesn’t. It’s almost like a comedy routine,” Green observes. “You do it and you feel that people respond to certain parts, they don’t respond to other parts, and you grow it and edit it and shape it based on that.”

As to whether or not he thinks there’s more to explore in the world of Bucky Fuller, he says, “With this I’m doing a live piece and an installation, and I may at some point do just a regular documentary about Fuller. I’m open. I’m certainly not done with him yet.”