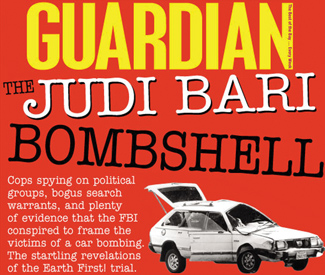 THE GREEN ISSUE Darryl Cherney is determined. “I have a mission in life,” he says. “And that is to find out who bombed Judi Bari.” This week, a judge may have gotten him closer to that goal, ordering evidence in the case be sent to a lab for forensic testing.

Cherney was in the car with Bari, a fellow environmental activist from Earth First, when a pipe bomb wrapped with nails exploded, maiming Bari and leaving Cherney with serious injuries.

It was 1990, and the two were in Oakland on their way to speak about the upcoming Redwood Summer, three months of picketing, tree-sitting, and otherwise blocking the clear-cutting of the California redwoods.

The Redwood Summer went on, but not before Bari and Cherney were arrested: The Oakland Police Department said they had constructed the bomb themselves and were transporting it in the back seat.

Before Bari and Cherney went to trial, it became clear that the bomb had been under the front seat (Exhibit A: Bari’s shattered pelvis and the unscathed backseat), and that there was absolutely no evidence Bari or Cherney had known it was there, and the charges were dropped. But the true culprit was never found.

In 2002, Cherney sued the FBI for attempting to frame him and Bari (who died of breast cancer in 1997), and won. But he’s still set on testing the remaining evidence for DNA.

“We rely on the government to examine physical evidence in a violent criminal case, and when they fail to do that, we have to react,” Ben Rosenfeld, Cherney’s attorney, told the Guardian.

“It should be an open attempted-murder investigation.”

But the authorities not only weren’t investigating, they were seeking to destroy the evidence, something Cherney and his lawyers have been fighting. On April 2, they scored an important victory when U.S. District Court Judge Claudia Wilkens issued an order preserving the material and allowing its transfer to a Hayward forensic lab for testing.

In August 2010, government lawyers had unceremoniously announced that they planned to destroy the case’s remaining evidence, which includes remnants of this bomb and another one that partially exploded in Cloverdale two weeks earlier, as well as a hand-lettered sign that was near the Cloverdale bomb. The Cloverdale bomb and the bomb that exploded in Bari’s car were constructed similarly, and no one has been convicted of either attack. Because they contain unintentionally intact evidence, partially exploded bombs are “considered to be the Holy Grail in bombing investigations. That slightly exploded bomb in Cloverdale is key to solving the case,” said Cherney. Lawyers for Cherney responded with a motion calling instead for testing of the evidence; the government opposed the motion.

But at a Sept. 8, 2010 hearing, Magistrate Judge James Larson ordered the FBI to turn the evidence over to an independent analyst for testing.

Again, the feds opposed the order, and asked for a de novo review of the case, essentially asking that the court go over all previous briefings once again. The motion seemed like a stalling tactic, and it worked; the motion was pending in court for a year.

Recently, it was brought back up again, when the plaintiff’s motioned to move forward with testing the evidence. They suggested a lab in Hayward, Forensic Analytics Laboratories, and Wilkens agreed on April 2.

Bari’s case came out at the start of what became a large-scale FBI crackdown on environmental justice movements in the 1990s and throughout the 2000s. Activists protesting companies that they thought were harmful towards animals and the earth became a special target of the FBI in what became known as the “Green Scare.”

The era was characterized by crackdowns on the Earth Liberation Front and the Animal Liberation Front, although it also affected groups like Food Not Bombs and Earth First.

“The case was an early forerunner of what we call the Green Scare cases, where the government sets out to make examples of people it perceives as leaders to try to chill activism in the environmental movement,” said Rosenfeld. “It was quite a scary season for environmental activists.”

The Green Scare did a lot to quell environmental activism, and some who were arrested at its peak remain in prison. But it didn’t stop many — including Bari and Cherney — from continuing their work.

“Both Judi and I continued right out of jail. Actually, in jail the police wrote in their police report that I was trying to convert them to environmentalism,” laughed Cherney.

“I participated in Redwood Summer and the Headwater Forest Campaign right through 1999 and continued through 2003. And now I’m making a movie about it.”

The movie, Who Bombed Judi Bari? has been doing well since it had its world premiere at the SF Green Film Festival March 2.

The film’s reception is “definitely very gratifying,” says Mary Liz Thomson, the film’s director, who “spent a lot of time editing it living in a cabin on [Cherney’s] land up in the woods, using solar power.”

Now she’s touring California with sold-out screenings, as well as some free screenings, including a well-attended March 26 screening at Occupy Oakland.

Thomson says she has gotten positive feedback from occupiers and others currently working in social movements.

“We’re just at the beginning of our launch and people are saying that it’s really relevant right now. The timing was great”

Indeed, laws that build on the Green Scare have been rapidly passed in recent months, targeting other political groups.

Controversy flared after President Obama signed the National Defense Authorization Act, which allows the U.S. to detain suspects without charge. Attorney General Eric Holder claimed that the government can kill its own citizens abroad without trial. And on Feb. 27, The House of Representatives voted in favor of HR 347, the so-called “Anti-Occupy Bill.”

Who Bombed Judi Bari? is an important history lesson for those faced with these new challenges. And Cherney may finally be on track to finding out the answer to the title’s question.