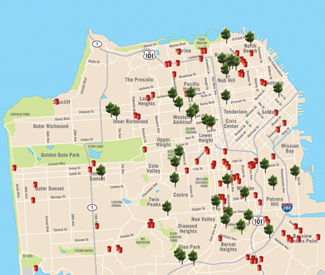 THE GREEN ISSUE It happens suddenly, unexpectedly: you turn a corner or hike up a street and notice, almost out of the blue, a well-kept spot of green, a surreal bit of nature sliced out of all the housing and concrete. According to a list provided to us by San Francisco Recreation and Parks (www.sfrecpark.org), there are 46 designated mini-parks, or pocket parks, nestled in various SF neighborhoods: publicly maintained, accessible areas usually no bigger than the size of a single vacant lot. We set off to discover five perhaps lesser known ones, described in the map below.

Then, in a nod to one of our all-time favorite cartographic-experimental books, Infinite City by Rebecca Solnit (UC Press, 2010, www.rebeccasolnit.com) we decided to overlay a map of locations of leaking underground storage tank (“LUST”) cleanup sites, found at geotracker.waterboards.ca.gov. LUSTs are buried tanks of toxic material, usually containing petroleum but sometimes solvents or other hazardous waste, that threaten groundwater, soil, and air and must be cleaned up — often with the help of state and federal funds — before the land they’re beneath can be built on or repurposed. We’ve plotted 85 LUST sites, many of them former or current gas station locations, whose statuses are under assessment or being monitored or remediated.

There is no direct connection between mini-parks and LUST cleanup sites; we think, though, that there is the suggestion of an environmental tale, a hidden history maybe, in the visual juxtaposition of the two.