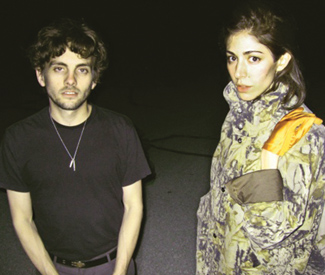 MUSIC Unable to resist a siren song with dark underpinnings, hanging low with heartbreak then taking you higher? Let Chairlift co-founder Caroline Polachek love you down when it comes to “Take It Out on Me,” off her Brooklyn band’s second album, Something (Kanine/Sony).

Maybe it has to do with the choked-up soul with which Polachek wraps her hollowed-out vocals around the fat, round syllables of the chorus, “Forget forgiveness / Forget all the rules / Just please don’t do it here / Bring on the fire / Cause business is cruel.” Or the way that the track’s clear, bell-like synth tones shiver delicately in the background — icicles pelted by a thunder shower of arpeggios. But the overall effect sounds like a consummate sad girl’s hit, à la Bonnie Tyler’s “Total Eclipse of the Heart.”

“That’s one of my favorite songs on the record,” Polachek, 26, says sincerely as her band’s vehicle makes its way to Montreal for a show. “I don’t want to get all emo on you in an interview, but it was about a frightening series of events in a dream. My dream family was being threatened, and I offered up myself in exchange for them and I was killed. I witnessed my own funeral at the end, too…”

She abruptly stops. “Wow, we just saw an eagle, a big white raptor!” A moment later she’s back. “There’s all kinds of vultures circling above us. Well, if our vehicle goes missing, you’ll know where we were!”

Edging away from that particular blackened fantasy, Polachek — part visionary with a watchful, Patti Smith-like eye for opportune inspiration and part down-to-earth every-girl happy to start an interview late so she can eat a sandwich — quickly picks up her thread once more: the blazing hot August 2010 day she and bandmate Patrick Wimberly, 27, worked on the song.

“The idea for the vocal movement came into my head, and I got excited about how it was sounding together, but all I could think about this was this horrible dream I had. The mood of the song was so sexy and fun and grooving, but this mood was so dry and awful and dark — somehow the two things happening at once was what that was. I think that’s one of the neat things about this record — there are layers like that, and darker songs have elements of lightness.”

The feeling of willingly bearing adulthood’s burdens — Chairlift co-founder Aaron Pfenning is long gone — combined with Polachek’s tendency to gravitate to the uncanny has rarely sounded so sumptuously effervescent than with the compulsively listenable, synth-dominated, and undeniably ’80s-hued Something.

If you’re itching for pop hooks, discover “Met Before” and “Amanaemonesia,” but if you’re yearning for aural thrills and spills, you’ll find those, too — in the spiraling Slinky keyboard runs of opener “Sidewalk Safari” and the tinkling, buzzing textures of “Frigid Spring.” The feeling of hermetic sonic richness, combined with Polachek’s undulating jazz- and R&B pop-touched vocals, stands alongside nothing less than Kate Bush’s The Dreaming (EMI, 1982) in its epic scope, tapestry of fictions, and blending of pop and prog.

“I was thinking a lot about textures when I was working on this record,” explains Polachek. “I kind of have a mental genre in my own head that kind of sounds like swimming pool music — with a chorus on it that makes everything sound not culturally cool but literally refreshing. Things that sound frosty and crystalline.

“And I got into a mental genre of sounds that were acidic and driving, like a dragon opening its mouth and hissing,” she continues. “I was gathering playlists, and some of those ideas found their way into the record. We’re living in a really playlist-y age, digging through the crates of history. I’m really into new age bath-time music.”

Unfortunately while the pair was busy drawing Something‘s warm bath, Polachek’s art-making has fallen by the wayside, apart from Chairlift videos. Still, her creative energies have obviously found a consuming outlet in her band. “It’s about all the desire,” she says, “to play like little kids play.”