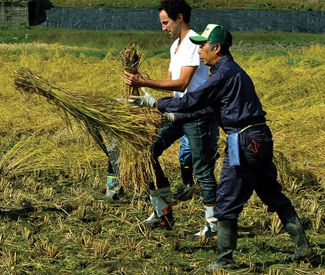 VISUAL ARTS The aura of old wars was in the room. Sock-footed, sitting on the floor eating bowls of ramen in the old barracks of the Marin Headlands, we were cozy and well-defended from the coastal fog. Once, these barracks were used to keep the Japanese out. But now we were welcoming them in, with every slurp of soup.

This was an art event about food and Japan. OPENrestaurant, an art collective of restaurateurs and cooks from the community around Chez Panisse, has been hosting events like these for the past four years. It’s the Alice Waters ethos applied to social practice art — creating food happenings where participants forge new connections, and a deeper understanding of food can hopefully occur.

This particular night, a foggy one at the Marin Headlands Center for the Arts, was a quiet one — no pigs butchered, or poultry running amok. It was a show-and-tell of the collective’s OPENharvest project of last fall, in which members — such as Jeremy Tooker from Four Barrel, Kayoko Akabori of Umamimart, and Sam White and Jerome Waag (current head chef) of Chez Panisse — met with people from the Tokyo food scene, to cook and eat beside them during rice harvest season.

Scattered throughout the room were mementos of the trip that spoke of the commonalities and the strange differences between the two cultures. eatlip gift: Cook book for Cooking People showed page after page of Saveur-esque snapshots of food — but no text. A stack of Café Sweet magazines sat next to the Four Barrel coffee cart, one of which featured photos from the Four Barrel café on Valencia. A small bottle of extra virgin olive oil was labeled in traditional Japanese brush script.

Ramen was served, the meaty broth spiked with Meyer lemon, and topped with gushy, soft-boiled egg. So were Japanese whiskey highballs, ubiquitous in Tokyo bars.

“There is this parallel community of people out there, who appreciate art and food in the way we do,” said White, a principle organizer of OPENharvest. “In the Bay Area it’s like preaching to the choir, people appreciate foodie-artsy-whatever. But to take it to a different culture, with a different food style, plug in some of our philosophy and have it work — that was super rewarding.”

During their trip, they made collaborative dinners with local chefs. Making bouillabaisse involved fishing in Tokyo Bay and calling farms for produce — an uncommon practice there. Local olive oil and wine was used. Dishes combined Japanese and California influences, for example using chestnuts, and kabocha squash as a stuffing for ravioli. Wild deer was butchered in front of their guests, and served.

“Everything tasted sweeter there,” said Waag.

Jonathan Waters, wine director at Chez Panisse, also took part. “The Japanese approached wine with an open palate. They were not conditioned to attach flavors to a construct — like dry or sweet. They were more open to the ethereal, mysterious qualities in wine.”

The Japanese were just as receptive to learning from OPEN members. “It seemed like it was a good time in the psyche of their country to talk about food,” said White. Sourcing of ingredients take on new meaning in a country dealing with the effects of radiation on agricultural areas.

But, said White, “Our Japanese friends said to us, ‘We don’t want to make this [event] a memorial to Japan.’ They didn’t want it to be just about radiation. That definitely exists, that’s a real thing, but there’s also a whole country with a future, stuff to hope for, and work towards.”

Last fall’s trip continues to have socio-cultural impact. The restaurants they worked with continue to call farmers directly for produce. And Japanese chefs and artists have since come to learn, cook, and do projects here in the Bay Area.

“Part of me feels like it’s not over,” said White. “Because what happened was we opened a door.”