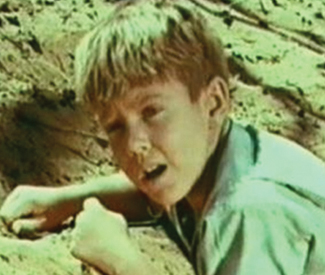 FILM It’s not easy being a repertory cinema these days, even when you’re the coolest (or only, or both) one in town. Hoping that this town is big enough for more than just one, at least for a few days, the Roxie this weekend is hosting a kind of cult cinema smackdown between itself and two more of the nation’s finest such emporiums. Under the blanket title “Cinemadness!,” the three-day marathon of rarities, oddities, and unbilled surprises challenges you to look away, or stay away — either way, your sanity will surely be shakier come Monday.

This will be followed by a real obscurity. Dirkie a.k.a. Lost in the Desert was a 1970 endeavor by the late South African writer-director-producer-actor Jamie Uys, who would later have a fluke international smash with 1980’s The Gods Must Be Crazy. (And end his career 16 years later with barely-noticed The Gods Must Be Crazy V.) The Apartheid-era racial attitudes that drew criticism to some of his other works are absent from Dirkie, a film nonetheless distinguished as one of the most traumatizing and sadistic “family movies” ever made.

The titular eight-year-old (Uys’ own offspring Wynand) is sent for his “weak chest” to the country. Unfortunately a plane crash strands Dirkie and terrier Lolly (played by “Lady Frolic of Belvedale,” whose performance is indeed splendid) alone in the Kalahari Desert. As Dad (Uys) frantically oversees search efforts from Johannesburg, our wee asthmatic hero is attacked by a viciously persistent hyena; scorpion-stung; blinded by snake venom; fed Lolly’s cooked remains (or so he thinks); etc. Preceding by one year Nicolas Roeg’s better-known Walkabout, Dirkie is an equally spectacular survival adventure saga that’s less arty but even less suitable for young viewers.

The Alamo Drafthouse — jewel of Austin, that oasis of civilization in Texas — takes up Roxie residence Saturday, March 24, with two of 1987’s finest sci-fi-horror-action black comedies. A sleeper hit then that’s underappreciated now, The Hidden has pre-Twin Peaks Kyle MacLachlan as a mysterious “FBI agent” (OK, he’s from outer space) tracking an interplanetary homicidal maniac who quite enjoys Earth — especially its loud crap pop music, Ferraris, and automatic weapons. This mayhem-spreading tourist fears no physical peril because it can always abandon one human (or canine) host body for another. Typical of the script’s over-the-top glee is a stretch when said thingie “possesses” a stripper, taking rather more pleasure in her bodacious form than any slimy, tentacled whatsit ought to.

It’s followed by Street Trash, to date the only feature film directed by J. Michael Munro (still a busy cameraman), who incredibly was just 20 when he made it. This last word in low-budget Escape From New York-Road Warrior knockoffs finds a depressed city’s ginormous Skid Row population winnowed by (among other things) cheap Mad Dog-type wine with a flesh-melting-acid bouquet. Incredibly crass (typical banter: “You fuckworm!”), gross (see: severed-penis-as-Frisbee set piece) and energetic, it’s the guiltiest, most pleasurable of guilty pleasures.

The Roxie wrestles its own back Sunday, March 25 with three big attractions. First up is George Kuchar: Comedy of the Underground, an ultra-rare 1982 documentary about San Francisco’s beloved, recently deceased DIY auteur that was unavailable for preview. Then there’s Robert Altman’s 1984 Secret Honor, with Philip Baker Hall as the craziest faux Richard Nixon on record.

That is nothing, however, compared to the brain-warping experience that is Elvis Found Alive. An alleged two-hour-plus interview with the King himself (shot in silhouette), whom filmmaker Joel Gilbert located with stunning ease thanks to poorly-redacted paperwork obtained via Freedom of Information Act, this … documentary? re-enactment? mock-doc fantasia? … bares many a shocking revelation.

To wit: secret FBI agent Presley faked his own death because the Weathermen, Black Panthers, and Mafia had joined forces to assassinate him. Believe me, that is just the tip of the ice cube in this video cocktail. It all makes more sense if you know Gilbert is himself a professional impersonator of Bob Dylan (whom Elvis confides “dumped that awful Joan Baez when she tried to push him into leftist politics”) and has also made such direct-to-your fallout-shelter opuses as Paul Is Really Dead and Atomic Jihad. Does “Elvis” have an opinion about President Obama? Ohhh yeah, and that “socialist thug” best not mess with Memphis. America forever! *