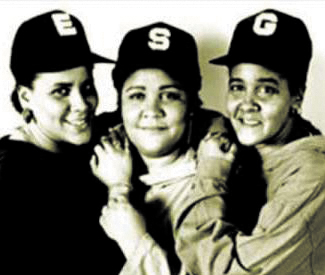 MUSIC Even the strangest sounds tend to lose their unfamiliar aura after a few listens. But no matter how many times I spin ESG’s “UFO,” I find myself utterly incapable of identifying that synthetic warbling that meanders through the minimal groove. Is it water gurgling in old gas pipes, a whirling police siren, the ferocious grumbling of a subway train? Or something more disturbing: Clanging echoes of gunfire, successive bursts of city noise filtered through apartment hallways?

It’s as if the song prompts a flux of associations that never find a place to rest. But as much as the song prompts a heavy dose of uneasiness, it works a curative spell on the body. That mysterious noise, whose relentless growth heightens the pulse of the rhythm, ultimately triggers an urge to break out in rhythm, and to put it quite simply: dance.

“Coming up in the South Bronx, in the 1970s, we watched Star Wars and Close Encounters of the Third Kind,” says lead vocalist and writer, Renee Scroggins, who together with her sisters — Valerie on drums, Deborah on bass guitar, and Marie on congas — originally composed ESG with a couple friends. “At the end of Close Encounters, they have that do do do do in the background when they communicate with the aliens,” she continues. “So I was sitting at home one day, and I thought: What would it be like if a UFO just landed in the middle of the projects? And that’s how I wrote the song. It begins with chaos and craziness, because I know what would happen,” she laughs.

Over 30 years have passed since ESG (Emerald, Sapphire and Gold) pressed “UFO” to wax on its debut seven-inch for Factory Records in 1981. Today, the unlikely story of the vinyl’s origins seems to be the stuff of lore. While still teenagers, the Scroggins sisters had been performing in New York’s downtown scene for a couple of years. “We were opening for A Certain Ratio at a club called Hurrah in New York when Tony Wilson [of Factory Records] heard us,” Renee recalls, “and he said, ‘how would you like to make a record?‘ I was like, yeah sure, because I didn’t think he was serious. But this was on a Wednesday night, and by Saturday, we were in the studio recording with Martin Hannett.”

Hannett, Factory’s eccentric in-house producer who is likely best known for his work on Joy Division, lent his uncanny touch to ESG’s sound. Bookmarked by the diss song “You’re No Good” and the other end of the love spectrum, “Moody,” with its emotional highs and lows, the EP consists in a stripped down polypercussive funk that would mark ESG’s style for the rest of its output: loosely structured drum patterns weave around pockets of emptiness and stark bass lines, letting Renee’s vocals flutter and hypnotize. It caught the attention of Ed Bahlman at NY’s 99 Records, who was already unofficially managing the outfit but hadn’t realized its full potential in the studio. The Scroggins followed with another EP and recorded their debut full-length for 99, Come Away with ESG, at Radio City Music Hall in ’83.

Come Away solidified its magnetic role during a fertile period of New York’s musical history, in which at least three strands of musical forms encountered each other to unexpected effect. The angular edge of post-punk deconstructed the blues guitar, no wave bands challenged rock purism by stressing the danceable groove, and block parties exploded in the South Bronx, establishing the conditions for what would eventually come to be known as hip-hop. ESG — which shared the stage with the Clash, Gang of Four, and Grandmaster Flash, and performed at Paradise Garage, Danceteria and the Mudd Club — was at the threshold of all this momentum.

What might single ESG out from its peers, though, is its rooted lineage in soul. “James Brown is definitely one of the biggest influences on my writing style,” says Renee. “He would always take it to the bridge, and cut loose, and I’d be like — ‘I didn’t want that part to ever end!’ But, I thought, if I could write a song, and just keep that bridge part going, then people could dance all night.” It’s not all that surprising that ESG’s talent for elaborating, intensifying, and prolonging the aesthetics of the bridge, in frenetic jams off its debut like “Dance,” “The Beat,” and “Christelle,” would correspond with the birth of the DJ, who would attempt a similar effect by looping breaks found in dusty bins of soul, funk, and rock. Soon enough, “UFO” became one of those sampled records.

Listening to “UFO” is all the more disorienting because of the overwhelming dispersion of offspring it calls to mind. That synthetic siren has been sped up, modulated, faded behind layers of reverb, or even spliced in its pure form onto a new backbeat. There are too many to name: Big Daddy Kane’s “Ain’t No Half Steppin’,” Notorious B.I.G.’s “Party and Bullshit,” and countless more from J Dilla, Beastie Boys, Q-Bert, among hundreds, if not thousands of others. You’d think that such an influential legacy would neutralize “UFO,” finally render it to that sterile status of the familiar, but the effect is much the opposite, as if its staggered mutations have only increased the alien, yet maddeningly ecstatic element, within the song.

ESG returned to the recording studio in the 2000s, introducing both Renee’s daughter as well as Valerie’s to the family venture. It dropped two albums of solid new material for Soul Jazz, which also released compilations of its classic singles and rarities. But after more than 30 years of performing and making raw grooves as well as some pop oriented songs in the mix, ESG plans to self-release its final record, Closure, this month (esgclosure.com), to coincide with a farewell world tour. So this might just be the last time its unidentified funk touches down live in San Francisco.

Presented by No Way Back, With DJ sets from Solar, Conor, and Junior