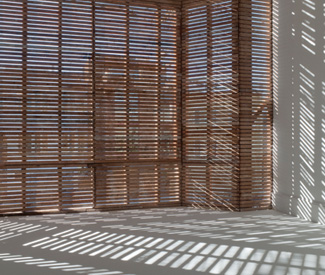 HAIRY EYEBALL Aside from its prime Cow Hollow location, the modest single floor, above-garage residence at 3020 Laguna Street is a largely unremarkable piece of real estate. Over its 150-year existence it has served as a home to people now forgotten, any relations of its last known occupants having cut all ties to this particular place. What’s left is the building itself, which, judging from its dingy stucco exterior and the tidy beaver dam of exposed lath covering what had been a bay window, looks as if it has an imminent appointment with the wrecking ball.

The house is indeed slated for demolition due to structural instability. But the lath-work exterior is in fact one of nine installations built in, on, and outside the house for Highlight Gallery’s inaugural site-specific project “3020 Laguna Street in Exitum.”

Real estate developer and Highlight Gallery founder-director Amir Mortazavi, along with co-curator David Kasprzak gave each participating artist the stipulation that, aside from fasteners, they could only use materials sourced from the house itself. The resulting pieces turn the space inside out, making visible the domicile’s history as well as its bones, while also bringing in new bodies to reside — however temporarily — within its walls. In short, 3020 Laguna Street in Exitum returns something of the “home” to this house in its final days.

Starting from the outside, Randy Colosky’s “Quantum Entanglement of the Carpenters Union Local,” a clean line cut into the building’s stucco exterior with two rotary saw blades protruding from either end, is a visual chicken-egg puzzle. The blades appear as if they were cutting their way out or had been simply left there mid-job.

Upon entering a narrow hallway, one is immediately drawn into the front room on the right where Chris Fraser’s “Outline” — the aforementioned beaver dam — can be properly experienced. Fraser stripped the exterior wall to its studs and lath, producing a Venetian blind-style grating that turns the brightly whitewashed walls into a canvas for shadow and sunlight to play off.

When I visited the site late on a sunny afternoon, visitors understandably congregated near “Outline.” It is a serene, almost patio-like space in which the outside world, still so near, is transformed into flickering bands of movement. Afternoon shadows create moiré patterns of interference on the walls.

The other focal point was Andy Vogt’s “Drawn Out,” perhaps the most technically involved and architecturally ambitious installation aside from Fraser’s. Vogt cut a diagonal path into the floorboards between the kitchen entrance and what had been a window, excavating it as a single piece. He then decreased the height of the floor joists below the cut and put the floor back in place, creating a ramp to nowhere that draws the eye from the kitchen down to the where the wall had been to a patch of scrubby bamboo that has taken root in the crevice between the house and the neighbors’.

Not all the interventions are as heavy on reconstruction as Fraser’s and Vogt’s. For “Nothing to No Thing” Jesse Schlesinger camped out in what was the bedroom for 28 days, from new moon to new moon, using elements from the room—mainly a baseboard and door trim — to create a bed frame and stools, and invited visitors to join him for tea and coffee. Aside from the furniture itself, the only traces of these visits are the used tea leaves and coffee filters, a guest log, and, in a decidedly homey touch, the height of each guest recorded on the doorframe.

Christine M. Peterson’s “Shift (Plane),” which transforms a large storage area off of the kitchen by detaching and radially shifting the facade of closet doors that covered one wall, and Yulia Pinkusevich’s “Data Mass Projection,” a basement installation created out of telephone and data wires found throughout the house that have been stripped and hung to resemble a light spectrometer, are formally pleasing yet don’t quite reveal the space anew.

If this project can said to be haunted, it is by the ghost of Gordon Matta-Clark, the 1970s New York-based artist and architect best known for those works in which he dissected existing buildings, often slicing into and opening them up, or engaged with marginal and neglected urban spaces he termed “nonsites.”

I’m not sure if 3020 Laguna, or if any piece of marketable property in our 7×7 real estate bubble, would qualify as the latter. Matta-Clark was working at a time when New York City developers were throwing money into large corporate construction projects that sought to bulldoze and build over much of the Big Apple’s infrastructural rot and many Americans were fleeing to the suburbs. His pieces at both urban and suburban sites were informed by — and drew attention to — this shifting architectural landscape. Despite the elegiac overtures of some the pieces, the stakes at 3020 in Exitum feel smaller even if the project is engaging as a series of formal experiments in spatial perception.