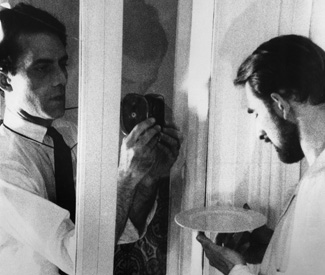 FILM Gregory Markopoulos was born in Toledo, Ohio, but his Greek heritage lights the way in critical appraisals of his refined and elusive body of work. Many of the films featured in the Pacific Film Archive’s “Seconds of Eternity” series are imagined on the stage of Greek myth. After leaving New York in 1967 with his partner Robert Beavers, an outstanding filmmaker in his own right, Markopoulos drew still closer to his ancestral home. He died in 1992, but Beavers, who will be on hand at the PFA to shepherd the films, has preserved the work for the Temenos, a unique archive and biennial outdoor screening cycle located near Lyssaraia, Markopoulos’s father’s home. This June brings another such event.

Markopoulos’s films have themselves long achieved mythic stature. He was a colossal figure during the heroic phase of the American avant-garde and then left it behind. Dissatisfied with exhibition standards, he withdrew his prints from circulation (the Temenos screenings represents the idealistic rejoinder). Remarkably, he requested that critic P. Adams Sitney excise a full chapter on his works from Visionary Film, generally considered the central critical survey of the American avant-garde. So Markopoulos went to almost unthinkable lengths to maintain the primacy of his early films (he continued making new ones, as well). Any opportunity to watch these ravishing films close to home is unusual.

Markopoulos once remarked that “locations and beautiful faces have been the backbone of my work,” and one sees that to an archetypal degree in Psyche (1947), the first film of his Du Sang, de la volupté et de la mort trilogy, made when he was still a teenage student at USC living across the hall from Curtis Harrington. Inspired by a Pierre Louÿs novella, the film replaces spoken language with dynamic color and framing. We begin with a man and woman crossing each other on a leafy Angeleno street: a few steps further and they turn back to consider what they’ve just passed. All that follows might be transpire within this instant: a languid fantasia hatched within a fugitive moment of lost time. Markopoulos frames the couple in deep focus two-shots, grazing shoulders and lips and tumbling toward dreams.

An evident poverty of means only concentrates the film’s withdrawal into a private world of frustrated beauty (across town Kenneth Anger was fashioning his more explicitly Dionysian Fireworks). The dive into inexpressible desire reaches a peak when Ralph Vaughn Williams’ “Serenade” suddenly drops out and the image snaps to a silent interlude of natural splendor bordering on abstraction — sea grass gorgeously superimposed upon the sea. This image gives magnificent form to the phrase “out of the blue” and overflows the frame in such a way as to shake loose the film’s more studied visual effects.

Markopoulos would later articulate in written form (“Towards a New Narrative Form in Motion Pictures”) what he set out to accomplish beginning with Psyche: “The film maker gradually convinces the spectator not only to see and to hear, but to participate in what is being created on the screen, on both the narrative and introspective levels. The magnificent landscapes of emotions, with colors brighter than the film viewer has ever been concerned with, begin to exist. The transient impact of meetings, handshakes, kisses, and the hours apart from these contacts becomes revealed in all its astounding simplicity.”

That “astounding simplicity” is readily apparent in A Christmas Carol (1940), a compressed bildungsroman evoking a richly embroidered fabric of memory with only a few spare images (mother setting the table, father looking up over his newspaper, figures dancing on a nearby rooftop). Twice a Man (1963) reveals the full extent of Markopoulos’ dream of a new narrative language. A psychologically fraught interpolation of the myth of Hippolytus and Phaedra (son seduced by mother and liberated from suicidal thoughts by a healer-artist), the film surfaces an internal state of emergency in a persistently emergent form.

Most remarkable is the densely interleaved editing by which Markopoulos folds multiple registers of time, color, and theme. Though often likened to other seminal works of the American avant-garde (especially Stan Brakhage’s Dog Star Man, 1961-64), Twice a Man‘s fractal form also recalls contemporaneous French films like Alain Resnais’s Muriel (1963) — though if anything Markopoulos’s cutting seems more evolved for its thoroughgoing commitment to simultaneity. Beginning with a ferry ride into blue New York, suggestive of any number of mythic crossings, there is an ever-sharpening concordance of different blocks of imagery. The protagonist’s central struggle to get out from under his mother and be reborn as his own person takes root in these syntactical somersaults. Indeed, this is where the modernist character of Markopoulos’s work shines through: a classical story embodied in the radical address of the senses. (You don’t need a neurologist to know that your brain gets a tune-up watching this film). Less successful is the cut-up spoken address that Phaedra delivers to her son, with which Markopoulos seems a little too assured of his genius. The haranguing pure speech dampens an otherwise brilliant film with a faintly misogynistic mist.

Though Markopoulos delved still deeper into myth with his Illiac Passion (1964-1967), he also gravitated towards more focused portraits of people and places in these years. San Francisco Cinematheque will screen Galaxie (1966), his anthology of New York people, in May. Meanwhile, the PFA sneaks in Ming Green (1966) before the epic Illiac Passion. The silent film gathers up images of the New York home Markopoulos was soon to leave as if for a bouquet. Edited in camera with great fluency, Ming Green revises the still life for cinema: the apartment’s objects sit in repose, vibrating with the articulation of color and residue of memory. Flourishing superimpositions put on a terrific show without abandoning the refined air of quietude. It’s unlikely that you’ll see a more exquisite short roll of film this year.

SECONDS OF ETERNITY: THE FILMS OF GREGORY J. MARKOPOULOS