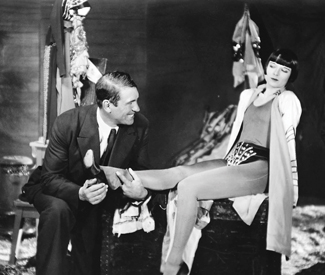 FILM The most famous and honored Hollywood directors have always been easily identifiable by style, genre, emotional tenor, or all the above. There’s Hitchcock with his wryly misanthropic suspense, and John Ford’s outdoor archetypes of masculinity. Even Steven Spielberg, who’s made just about every kind of narrative, has a telltale penchant for sweep and sentimentality running through everything from Jaws (1975) to The Adventures of Tintin (2011).

But the director probably responsible for more popularly embraced classics than any other during the industry’s golden age remains less familiar by name than many inferior talents, and his was the classic case of a lifetime achievement Oscar offered as thinly veiled apology for being ignored by the Academy over a long, conspicuous career haul. Howard Hawks could be said to bring all this upon himself: while far from modest, he was never much interested in self-promotion, or publicity in general. Nor did his films provide the obvious auteur identification points of a recognizable visual style, or consistent interest in particular genres or story elements.

They’re immaculately crafted, with some thematic similarities one can poke an analytic stick at after extended scrutiny. Yet as much as Hawks fought for creative freedom, often exasperating studio executives with his stubborn independence, he had few pretensions (or tolerance) toward art, pretty much measuring his movies’ value by their box-office performance. As has been noted elsewhere, that wasn’t because he was a bottom-line-focused hack, but because for decades his personal taste really did seem precisely in synch with the majority public’s.

The Pacific Film Archive’s “Howard Hawks: The Measure of Man” offers plenty of opportunity to weigh that discriminating yet popular appeal via a retrospective that’s thorough if not quite exhaustive. It reaches from his earliest extant feature (1926 comedy Fig Leaves) to his penultimate (’67 John Wayne horse opera El Dorado).

Between, there’s an almost staggering array of gems, more than any one life’s work should encompass: the seminal gangster flick (1932’s Scarface); deathless screwball classics Twentieth Century (1934), Bringing Up Baby (1938), His Girl Friday (1940), and Ball of Fire (1941); war epics (1930’s The Dawn Patrol, 1941’s Sergeant York); Western totems Red River (1948) and Rio Bravo (1959); setting the standard for cinematic sexual cool via the invention of Bogart and Bacall (1944’s To Have and Have Not, 1945’s The Big Sleep). Hawks wasn’t particularly attracted to musicals or sci-fi. Yet he made one of the all-time most enduring titles in each category, Gentlemen Prefer Blondes (1953) and The Thing from Another World (1951, with “official” directing credit going to Christian Nyby).

Hawks came from Gentile gentry, which lent him an air of entitlement he didn’t mind using to intimidate the largely Jewish, working-class backgrounded studio chiefs he infuriated by running way over budget and schedule. The motion picture business was an odd, borderline-disreputable choice for his like just post-World War I. Yet its wooliness (not to mention the never-ending wellspring of pretty girls) struck his fancy, and he worked in numerous capacities before getting to direct a first feature in 1923.

Later he’d dismiss his silent-era films as apprenticeship, though the few that survive have their points — 1928’s A Girl in Every Port introduces an ongoing motif of jokily tough-loving male camaraderie and finds a quintessential Hawksian woman in coltish flapper legend Louise Brooks, while the same year’s hunk of “Arab sheik” exotica Fazil has some unusually vivid (for Hawks) depictions of sexual desire.

With sound, however, Hawks was immediately in his element: snappy patter and hardboiled realism (or something like) were more to his liking than the pictorial emotionalism of the silent screen, even if as a director he remained close-lipped toward cast and crew to a “sphinx-like” degree. (The many superficially contradictory comments about his on-set demeanor gleaned from collaborators in Todd McCarthy’s definitive biography Howard Hawks: The Grey Fox of Hollywood reveal a technique that liberated some and frustrated others.)

Scarface, which prompted his first of many censorship battles, came out as the gangster vogue was considered kaput. Yet it was a sensation, and remains the only such film from that era still shockingly violent, sexual, and modern. It’s arguable that the Hawksian template wasn’t fully formed until 1939’s Only Angels Have Wings. Its loose, episodic script suited his essential disinterest in narrative (which would become a problem in the 1960s), allowing all the greater focus on a tight group of wisecracking, poker-faced men in daily peril (as mail-delivering pilots in the remotest tropics), while Jean Arthur’s dogged pursuit of a seemingly disinterested Cary Grant posited women as an infrequently worthy adversary-companion on rare occasions invited into the boys’ club. (In the screwball comedies, however, berserk woman often simply torments man into submission.)

Allergic to mush stuff, Hawks liked slim, sporty, husky-voiced women — ones an ever-decreasing fraction of his age as time passed, both on and off screen. (Though Gentlemen made her, he professed zero understanding of bodacious Marilyn Monroe’s appeal.) Yet as with his three marriages, he seldom stuck with one for long, almost never casting leading ladies twice while working recurrently with Grant, Wayne, Gary Cooper, and numerous behind-the-camera personnel.

After a long, nearly unbroken string of hits, his touch began slipping in the mid-1950s; like many old-school Hollywood greats, he seemed quite out of synch with the times a decade later. By then Hollywood was probably relieved to be rid of a filmmaker who’d always used his success as leverage in getting maximum paydays (though as a compulsive gambler he was forever in debt), as well as against studio interference. He avoided long-term contracts whenever possible, acting like an independent agent long before seismic industry changes essentially dismantled the contract system for everyone. His politics were conservative, but seldom flexed — he had little use for politicking unless it helped him get more freedom (and money).

Hawks could be arrogant personally, yet was nothing if not unpretentious about his art, at one late point insisting “I never made a ‘statement.’ Our job is to make entertainment.” An unproduced screenplay from his twilight years describes central characters in terms one imagines he’d readily apply to himself: “Tough, resourceful, cheerfully ruthless but always within limits, deeply loyal to a friend but never sentimental, equally needing women, adventure, and a spice of danger to make life worth living.”

“HOWARD HAWKS: THE MEASURE OF MAN”