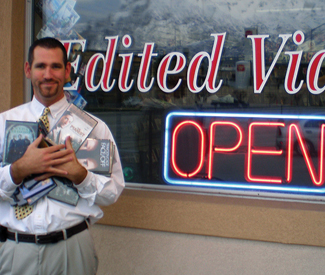 TRASH The term “Hollywood” has become a many-splendored pejorative, applicable to anything trite, vulgar, politically liberal, morally lax, and so on and so forth. Yet as much as they might like to think they’re so-not That, what red-corpuscled Americans with an electrical socket in their dwelling — or simply senses to absorb stray bits of popular culture when they venture outside — aren’t influenced by if not downright addicted to some facets of the entertainment industry?

It takes enormous effort to approach purity in this regard: a combination of home-schooling, mainstream-society-shunning, self-sustaining, off-grid living that pretty much requires the clock be turned back to pioneer days, before oughty-mobiles and other fancy products of modernity. Certain radical polygamist sects of recent notoriety might be the closest anyone in the Lower 48 gets these days to unhooking more than one stubborn individual or three off the infinitely tentacled monster of pop media.

Of course those people are weirdos whom mainstream Mormons prefer not to be associated with, especially when they’re running for President. To be a regular LDS Church member means having a looser, somewhat disapproving yet tolerant attitude toward Hollywood products. It means, for instance, deeming MTV too racy for basic cable. (Think of the children!) It means wanting your cake, but eating it with less decadent icing. However, many a chef chafes at a consumer scraping the offending spices, toppings, and toplessnesses from his or her labored-over creations just because said consumer is on some special diet. From the consumer’s POV, of course, the issue is different: they paid for the item; why shouldn’t they doctor it as stomach and conscience decrees?

That debate, acted out in the heart of Mormonlandia, is at the crux of Andrew James and Joshua Ligari’s documentary Cleanflix. Its eventually very twisty tale starts out with the simple arrival of a supply to meet a demand — in this case, “cleaned up” versions of Hollywood movies offered for rental or purchase in a handful of Utah stores starting around the turn of the millennium.

Handily removing “sex, nudity, profanity, and gory violence” — pretty much in precisely that descending order of importance — from commercial movies for home viewing, Ray Lines’ original CleanFlicks identified a community need and filled it. This success did not pass unnoticed. In fact even as CleanFlicks sold its stores and moved into online distribution, competitors were multiplying like plygs (children of polygamous families), each one howling as the next invaded their territory.

There are many things you can’t do, or at least are strongly discouraged from doing, in the Mormon-dominated state of Utah. But practicing cutthroat capitalism is not one of them — quite the opposite. Money corrupts just like power, however, and Cleanflix veers in unexpected directions as one of its principal characters, a seemingly affable and earnest man of faith, turns out to be a purported fornicating stoner pornmonger whose only spirituality was spelled with a $. The heat gets such that he has to flee the state, briefly landing in Gomorrah itself, Hollywood.

Even as it stumbles upon such lurid human interest, Cleanflix keeps an eye on the bigger picture, notably the question: who has the right to alter a copyrighted work? Some “clean” video shops clung to the notion that since they purchased and tweaked each and every DVD themselves, they were free to do what they wanted with them. Besides, don’t the big studios often create censored versions of their own films for airplane screenings and such?

The industry begged to differ, eventually winning court victories that shut down most (if not all) of the independent “content filtering” businesses. We hear from directors like Steven Soderbergh and Neil LaBute (the latter an ex Mormon), who bristle at the hubris behind “changing something that doesn’t belong to you,” saying that it’s naive at best to think in taking a few bricks out of an artistic house you won’t cause the whole structure to collapse. Then of course there’s the worry that such tampering “cultivates a tolerance for censorship” and uses legitimizes “a shamefulness toward sexuality,” no matter what the artist’s original intention might have been.

Ye olden American hypocrisy in matters of sex vs. violence — so opposite the attitudes flaunted by our socialistic European brethren — is glimpsed in “cleansed” movies like 1996’s Fargo that many patrons find permissible with all its extreme bloodletting intact (remember that wood chipper?), but one mention of the word “penis” tastefully excised. The mind reels at some successfully censored cinema noted here, like 1999’s The Matrix with all its umpteen non-graphic killings removed, or even sacrosanct Schindler’s List (1993) minus any concentration camp details unsuitable for the entire family.

Some movies, however, resist all taming. Ray Lines admits there was no point trying to scrub up 1990’s seemingly harmless Pretty Woman (whose Cinderella is a streetwalker). As for 2005’s Brokeback Mountain, well … “We didn’t do that one on principle,” a CleanFlicks editor says. Just as the monkey at the typewriter will sooner or later write Hamlet, so in the infinite diversity of human experience, once in a great while homophobia is going to be good news for homosexuals.