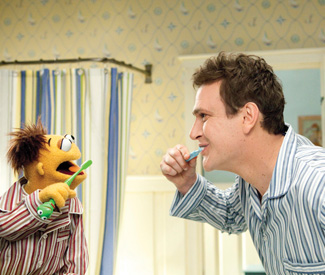 YEAR IN FILM I haven’t laughed so hard or so deeply in a movie theater as I did watching The Muppets after a languorous Thanksgiving dinner. Perhaps it was as much due to the tryptophan, sugar, and booze coursing through my system as to the welcomely familiar zaniness transpiring onscreen, but more and more my chuckling was subtended by the throaty chokes that presage a good, deep cry. And when I caught the pointedly placed photo of Jim Henson in the background of an interior shot, it finally hit me: that warm lump in my chest was nostalgia.

For a movie as universally praised as The Muppets has been (and let it be said, its 97 percent approval rating on Rotten Tomatoes is totally deserved), most of the nitpicking I’ve noticed has centered around whether the film pours on the sentiment too thickly, spoiling the fun with too much maudlin self-awareness about the Muppets’ past. “Nostalgia and reverence are anti-Muppet,” wrote one reviewer. But I don’t know if Jason Segal — who, aside from co-writing and starring in the film, was also the project’s greatest proselytizer — could have made The Muppets any other way.

For starters, the Muppets, for all their “let’s put on a show” tenacity and plain old absurdity, are like many professional entertainers, a vulnerable bunch. Think of Gonzo or Fozzie’s frequent moments of self-doubt, or Kermit’s periodic disillusionment with his role as ringmaster. The crestfallen wistfulness he displays at the start of The Muppets isn’t too far removed from the mid-career crisis he underwent in The Muppets Take Manhattan (1984). After all, it’s not easy being green.

The Muppets is also startlingly self-reflexive about the disjuncture between the Muppets’ status as Disney-owned intellectual property (acquired from Henson’s family in 2004) and their legacy as beloved cultural icons. The movie’s climax dramatizes this situation, effectively condensing the entire operation of emotional rescue that the film is premised on: having failed to raise enough money through their spirited telethon to buy back the rights to their name, Kermit and company nevertheless exit the old Muppet theater to an adoring public who, like much of the audience watching the film, never forgot them in the first place.

The drama at heart of the Muppets, what gives their wacky antics such emotional heft, and what necessarily makes The Muppets a reconnaissance mission and not just another franchise reboot, is this: becoming aware of one’s vulnerability is a huge and unavoidable part of growing up. Life can’t always be fun or fair. Eventually, we put away our stuffed animals and frayed blankets and take bigger risks, only to return to those objects as adults when we want to retreat from putting ourselves on the line again and again. But we can’t go back; not really. We can only move forward. The show must go on.