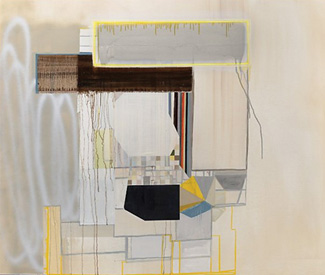 YEAR IN VISUAL ART “Occupy the Empty,” Amanda Curerri’s 2010 solo show at Ping Pong Gallery (now Romer Young Gallery), seems about as appropriate a tag line as any for this past year. It’s not just Curerri’s prescient title that resonated with the occupations at Zucotti Park, Frank Ogawa Plaza, and the Mario Savio steps at U.C. Berkeley’s Sproul Hall, as well as the populist expressions of protest seen throughout the Arab Spring that many involved with the Occupy movement looked to, not always unproblematically, as sympathetic precedents.

“Occupy the Empty” took seriously the question of how art and aesthetics can create a more democratic society, testing the tensions inherent within the question’s very terms by asking viewers who entered Curerri’s deconstructed courtroom to become witnesses. The efficacy of the entire enterprise was predicated on individuals taking the stand, but also placing their testimony against and alongside those who had spoken before about a form of speech no less personal and performative: last words.

Similarly, the tension of the individual voice in relation to the collective it contributed to has been the engine motor of the Occupy movement. At the encampments no one could speak for anyone else and yet everyone was, at the very least, in agreement on the necessity of being present, a message often relayed (without an apparent sense of irony) back to the assembled, via a re-presentational strategy known as “the human microphone.”

One could also point to the whimsical criers and peddlers of Allison Smith’s “Market Day,” a public performance event held on and around Market Street in June as part of her Southern Exposure exhibit “The Cries of San Francisco,” or Stephanie Syjuco’s “Shadow Shop,” a mom-and-pop-style art market that resided for five months at SFMOMA, as other examples of participatory artistic practice that aimed to insert alternative forms of democratic exchange into public life, in some ways anticipating much of the discussions around aesthetics and politics that Occupy generated.

Whether this exploratory, incessantly present dynamic will — or can — continue to “trickle up” further through the art world remains to be seen. Major museums largely played it safe this year going with tried and true blockbusters (locally, Picasso and Impressionism) or spectacular spectaculars that had critics alternately swooning or pointing at the naked emperor’s relentless march, as in the recent retrospectives of Mauricio Catalan and Carsten Höller in New York.

Certainly, the likes of Charles Saatchi grumpily lecturing about cultural capital and the “vulgarity” of new super-elite art collectors in the pages of the UK Guardian doesn’t make the one percent look necessarily any more “in touch.” (Not that any of the moneyed gawkers I encountered at Art Basel Miami would care.) On the other hand, Alice Walton’s recently opened Crystal Bridges Museum of American Art in Arkansas, funded with Wal-Mart cash, can be seen as presenting both a possible new model and a grim augury about how art’s public future will rely even more transparently but no less troublingly on private beneficence. Why must we travel to a major urban center to see outstanding art? Then again, why donate to a museum when you can build you own?

Although I don’t do regrets, I believe that putting out something “for the record” should still count as as a positive — despite constant abuse of the phrase by those publicly scandalized for their private moral failings. So, following in the tradition of last year’s “year in art” column, here is an incomplete rundown of art, exhibits, and, institutions that didn’t entirely make it in for myriad reasons, none of which had to do with the work itself.

Who said non-representational collage was done for? VanDyke’s colorful, mixed media mash-ups of paint and paper flaunted the grain of their materials and the elegance of their compositional logics with the disciplined flourish of a master flamenco dancer.

Whereas SFMOMA’s track record in regard to exhibitions has been mixed this year (cheers to the recent Richard Serra and Francesa Woodman retrospectives; good riddance to the slog that was “Exposed”), its public programming has brought an invigorating mix of poets, musicians, performers, and audiences to the institution, making that word seem an awfully staid descriptor for a venue that has consistently hosted such unexpectedly engaging and fun events.

“BALENCIAGA AND SPAIN” AT THE DE YOUNG MUSEUM OF FINE ART, MAR. 26-JULY 4

The sculptural, late 1960s pieces in this quiet stunner of a show highlighted the influence of Spain’s many forms of national costume upon its most gifted native sons, couturier Cristobal Balenciaga — and should shush the grousing of anyone upset over the rise of fashion and textile exhibits at major art institutions. To appropriate a nugget of praise once paid to Yves Saint Laurent, we can debate whether or not fashion is art until the cows come home, but there is no doubt that Balenciaga was an artist. Bring on the Gaultier!

Ireland’s early ’70s canvases of cement, dirt, and rock are slices of time, fragments of place. They are numinous, fragile reminders of being, as well one piece of the legacy of this late, great Bay Area artist.

If you haven’t already planned a weekend around the Getty’s massive, multi-institution survey of postwar California art (www.pacificstandardtime.org), you owe it to yourself to head south ASAP. Many of the participating exhibits close in late January, so get!