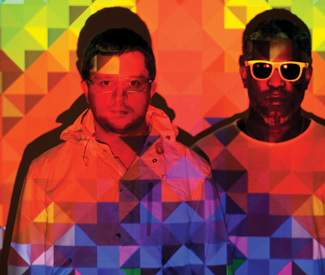 All the while, an offbeat rhythm assaults the interweaving drum patterns, unsettling any steady flow that might have taken shape. This tension pulls the music forward, destining outwards, while the bass anchors the body, whether on the dance floor or just mesmerized inwardly, a head in the groove.

The sound builds in momentum, in suspense, but with subtle patience, producing a great gathering of intensity — which if you happen to hear on the right sound system — exceeds its limit, and disorients, overwhelms, destructs, rejuvenates. It’s the Dionysian rave rewired for our times.

“We grew up in that whole bass line culture in the UK with dub, reggae, soul, and everything that’s come about after it and around it,” says Steve Spacek, who together with Mark Pritchard makes the duo Africa Hitech. “We try to tap into that amazing feeling of the frequency in the club when everyone’s getting down together on one vibe, one of the best feelings imaginable.”

Seasoned producers-vocalists Spacek and Pritchard have pursued this utopian vision of sound in their latest project. In the past couple years, Africa Hitech has released three EPs, including this month’s Do U Really Wanna Fight on Warp, and dropped a brilliant record earlier this spring, 93 Million Miles. The songs navigate two topological poles: the cosmic and the streets. While “The Sound of Tomorrow” and “Light the Way” evoke otherworldliness, the ecstatic openness of galactic space channeled by the likes of George Clinton’s Mothership and Sun Ra’s Arkestra, “Blen” and “Gangslap” gurgle in the enclosed terrain of frenetic polypercussion and dread inducing low end. Their vocals wreak both havoc and bliss on language: soulful croons give away to disembodied vocoder chants; or, Spacek unleashes a growling patois, and sample cuts dissipate in mutilated mantras, reconfigured on a stuttering trigger pad: “Out/ Out/ Out/ Out in the streets/ Out in the streets/ They call it murrderrrrr.”

“We’re trying to preserve the Jamaican sound system in the music we make,” says Spacek. “There’s all these so-called different genres, but we just see them as all just one family. In the end they’re just different tempos and sensibilities of the same rhythm.”

That rhythm, the swing, carries traces of its past. Its body has been dispersed across the Atlantic: marked by violence, labor, hybridization, creative upheavals and reversals, restless paths of migration and commerce, moments of resistance and dreams of redemption. In these diasporic unfoldings, the swing has evolved, adapted, mutated. Those struck by the rhythm have both reinvented its prosthetic origins and conjured alternative prophecies, sometimes in folkloric traditions, sometimes in the margins, on the limits of popular music or in the neglected underbellies of familiar acoustic space. Recall the recent ancestry. Mystic purveyors of dub armed the bass line in a highly weaponized electronic form; techno rebels programmed the soul of the machine with analog drum machines, keyboards, and sequencers; hip-hop and jungle collagists digitized the beat through cut and paste sample techniques, effect, and manipulation. Today, footwork, dubstep, funky, and all their kin tap into the same alchemy, spread spontaneously through the planetary dissolution wrought by cyberspace. Africa Hitech picks up here.

For Spacek and Pritchard, sonic oscillations between the cosmic and street, inner and outer, traces of the past and hyper-tech future, collapse in the simple and pure feeling of the intoxicating bass line. “We’re not trying to make music that’s deep and meaningful. We’re trying to make music that feels good … the kind of feeling that you can’t escape, and you don’t want to, you get lost in it,” says Spacek, the words now rushing out. “The bass becomes so immense that it’s literally rattling your ribcage. Some call it spiritual. It resonates. It makes sense, intuitively. But there’s some kind of emotion in there that we don’t quite understand. To some degree, we don’t want to understand it, maybe we can’t. We just want to feel it.”