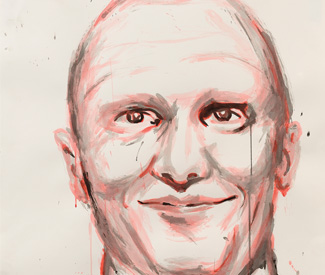 Kim Kardashian needs Barbara Kruger, who collaborated with the self-branding phenom on a now infamous cover portrait for W magazine’s 2010 art issue, like a fish needs a bicycle. And Warhol’s silk-screened Marilyns, or even Jeff Koons’ ceramic tribute to the King of Pop and his pet primate, seem positively quaint next to the hollow extravagance of Siren (2008), Marc Quinn’s life size statue of a yoga-posing Kate Moss cast in solid gold. I’m sure, though, that Kruger and Quinn appreciated the press their pieces netted them.

So, kudos to Bay Area artist Ray Beldner for attempting to scout some new routes through well-trod terrain. His two series of portraits at Catharine Clark Gallery are as much about the processes used to create them as they are the famous (and sometimes infamous) faces they depict. The results are decidedly mixed.

For the ghostly digital portraits in the first series, “101 Portraits,” Beldner overlaid the first 101 results that came up in a Google image search for a given subject, resulting in a hazy composite of that person’s publicly circulated image at a particular moment in time that reveals little of their actual likeness.

Some subjects are recognizable by a certain feature (Sarah Palin’s trademark up-do, Barack Obama’s prominent ears), whereas others (Michael Jackson, Britney Spears) are nearly unidentifiable, eraser-marks of their former selves.

The portraits invite allegorical speculation. Is the recognizability of Palin and Obama’s outlines a testament to the consistency of image in politics? Does the illegible smudginess of Jackson and Spears offer a formal comment on their respective falls from grace? But why over think things? Beldner’s composites are at their most intriguing when viewed as useless data sets; palimpsestic reminders that for all of the algorithms Google has churning out its top results, the internet is still something of an impenetrable jungle.

Gimmickry gets the better of Beldner’s other series, “Drawn by the hand of…,” hung in the gallery’s rear space. Wearing silicone gloves made from casts of other people’s hands, Beldner applied colored ink directly to paper. The resulting ventriloquized finger-paintings — whose sparse, monochromatic figurations recall Raymond Pettibon — are too stylistically uniform to say much about the potential affective affinities between the hand used and the person depicted.

Rather, the paintings come off as obvious and sometimes ghoulish sight gags: Jackson (again) was drawn using the hand of a young boy; for Jaycee Lee Dugard’s kidnapper Phillip Garrido, Beldner used the hand of a young girl. If the gesture seems familiar, it’s because it’s old news: another Young British Artist alum of Quinn’s, Marcus Harvey, caused much pearl-clutching with his 1995 portrait of British child murderer Myra Hindley, created by applying gray and black acrylic paint using a plaster cast of a child’s open palm.

Leslie Shows’ large-scale mixed media portraits of the many faces of two pyrite chunks are the formidable and beguiling standouts of “Split Array,” her first solo exhibit at Haines Gallery. Despite Shows’ subject matter — fool’s gold — there is no joking around here. The pyrite portraits are the 2006 SECA Award recipient’s most technically finessed exploration of the parallels between geologic formation and the material process of painting to date.

Shows has worked layers of Plexiglas, colored ink, Mylar, crushed glass, metal dust, and mirrored shards onto thin, reflective aluminum panels (which she also engraves) to create trompe l’oeil effects that give her compositions dimensional heft despite their bas relief-like surfaces. When viewed head-on, a silvery pyramid-shaped outcrop seems to emerge from the upper left section of Face K (2011), pulling away from its striated Plexiglas backing. Similarly, Face P (2011) seems to extend infinitely back into the upper right hand corner of its aluminum “canvas” even as bloodied streaks (ink stains, perhaps?) in the lower half foreground the entire composition’s flatness.

However dazzling, the pyrite portraits are not merely the sum of such special effects. A deeper kind of alchemy is going on here beyond Shows’ transformation of industrial materials into representations of a mineral which is, by and large, useless to industry. I’m still trying to put my finger on it. Robert Smithson’s dictum “Nature is never finished” comes to mind as a signpost, although I’m guessing he would’ve had beef with the Faces series.

In Smithson’s gallery installations, the mirrors placed to infinitely reflect piles of shells or dirt were reminders of these natural components’ infinite variety and unknowable totality. Nature could be brought into the white cube but the white cube would never fully exhaust it. Show’s pyrite faces — with their man-made materials and Cubist collapsing of multiple perspectives — arrive at a similar conclusion, but through overt representation rather than presentation. To attempt the latter would risk evoking a naive transcendentalism which in this day and age could amount to a fool’s errand.