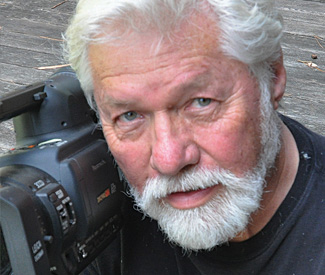 FILM While he’s always kept a fairly low profile doing it, probably no director who calls the Bay Area home has balanced our penchant for documentary work and independence with a successful commercial (meaning Hollywood) career as gracefully, or as long, as John Korty. Now 75, the Marin resident is in the midst of a major retrospective — incredibly, his first — at the Christopher B. Smith Rafael Film Center, which runs through December 4.

You’ve already missed his first feature (whimsical 1966 indie The Crazy-Quilt), his latest (veteran rock ‘n’ roller portrait John Allair Digs In!), and one of the most popular broadcast documentaries ever: 1977’s Who Are The DeBolts (And Where Did They Get 19 Kids?), about a Piedmont, Calif. couple and their huge clan of mostly adopted children, many disabled war orphans. But there’s still plenty left that conveys the diversity of Korty’s output, even if it just scratches the surface of his nearly 50-year career — which began auspiciously enough with an Oscar nomination for 1964’s short anti-smoking satire Breaking the Habit.

That same year the native Hoosier moved with his Bolex to Stinson Beach. Filled with the era’s infinite youthful ambition, he made three features in fast succession, though despite all awards and admiring reviews, they took much longer actually getting released at a time when art house meant foreign films. The Crazy-Quilt mixed Chaplin-esque pathos with the antic and existential in its charting a dedicated cynic and a “girl who believed in everything” from meet-cute to shared grumpy old age. Likewise shot all over SF and Marin, 1967’s Funnyman had influential improv group the Committee member (and future sitcom staple) Peter Bonerz as a gifted comedian who’s a petulant boy-man offstage. Barely theatrically released in 1971, four years after its festival debut, its Rafael showing was probably its first local appearance in decades.

Korty had resisted Hollywood overtures since Crazy-Quilt, though he did work for Francis Ford Coppola’s then-fledgling American Zoetrope for a couple of years. In 1972, however, he commenced a prolific 26-year run of major-network TV movies, starting on a high note with odd utopian sci-fi fantasy The People (in which William Shatner restrains himself) and permanently-scarring teen cautionary tale Go Ask Alice.

Sometimes the material was a little schlocky (like 1991’s Suzanne Somers autobiographical dramatization Keeping Secrets, not to mention a little thing from 1984 called The Ewok Adventure), but more often his sights were set unusually high, with results sometimes among the very finest in the much disparaged telepic genre. Certainly considered such were two landmark films the Rafael shows for free over the next couple weeks: 1974’s The Autobiography of Miss Jane Pittman, with Cicely Tyson as the ex-slave whose 100 years take her all the way to a 1960s civil rights march; and 1976’s Farewell to Manzanar, depicting America’s internment camps for Japanese-heritage citizens during World War II.

Once he’d crossed into broadcast, Korty had relatively few big-screen opportunities; the drippy 1978 Love Story sequel Oliver’s Story probably made him wish for even fewer. Getting a very rare revival at the Rafael is the more indie-sensibility ’76 Alex and the Gypsy, an offbeat if uneven comic romance between delightful Geneviève Bujold’s Roma woman and Jack Lemmon (basically playing Jack Lemmon) as her bail bondsman.

Korty’s longtime animation jones has rarely won much attention, despite its scattered presence in his filmography (like Funnyman‘s brief cartoon interludes). But it found full expression in 1983’s feature Twice Upon a Time, which closes the Rafael series. Regrettably underseen even by professed animation fanatics, a theatrical nonstarter, and DVD (let alone Blu-ray) holdout, it utilizes cut-out techniques Korty devised himself to follow “all purpose animal” Lorenzo, his sidekick Mum (who “speaks” in foley effects), and their fight to prevent evil Synonamess Botch from dropping “nightmare bombs” into the subconscious minds of sleepers worldwide. It’s a charming odyssey that recalls 1968’s Yellow Submarine in applying adult wit and design imagination to child-friendly ‘toonery.

As if all this weren’t rangy enough, a November 27 shorts program traverses ground from a 1961 documentary (The Language of Faces, chronicling a Quaker peace vigil at the Pentagon) to brief Sesame Street animations and 1974’s The Music School, a half-hour John Updike miniature from PBS’ American Short Stories series. *

“THE FILMS OF JOHN KORTY”