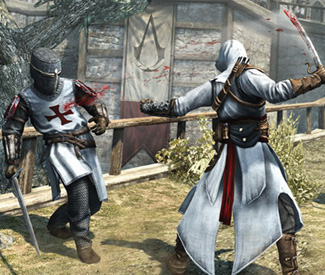 GAMER Historical fiction tale and science fiction soap opera about a man who relives his ancestors’ memories through a special machine, Assassin’s Creed is a satisfying fusion of the stealth and platforming techniques pioneered by publisher Ubisoft with its Prince of Persia and Splinter Cell franchises. And each year fans cringe at the prospect that the ambitious saga is spreading its potential thin with an annual release model.

The fourth entry in as many years, Revelations has players catching up with Italian assassin Ezio Auditore. Now a much older gentleman, Ezio arrives in 16th century Istanbul in search of physical recordings of the memories of the life of Altair, the first game’s protagonist. As Ezio uncovers Altair’s memories, there’s a bit of Inception going on: you’re reliving the memories of a man reliving the memories of another man. But, in choosing to address the existing mysteries of the series rather than create new ones, Revelations manages to close Ezio’s story with grace, and legitimize Altair’s brief presence in the series.

By the fourth game, hand-holding tutorials should no longer be necessary, but Revelations is eager to introduce new gameplay elements, at the expense of the open-world exploration and colorful characters that make the series intriguing.

Topping the list of new gameplay features are bomb-crafting and a tower-defense mini-game that tasks Ezio with controlling armies of assassins against waves of attacking Templars. The tower defense is fun enough, and makes sense thematically, but it feels like a different game and the pressure to constantly protect your assassin dens is frustrating. Likewise, the constrictive spotlight on bomb-crafting is surprising considering how much less practical bombs are than sneaking and platforming.

Failed though these features are, the core of Revelations holds a technically brilliant game, and Ezio’s story is told with some nuance — an all too undervalued commodity in the game industry. If there’s a crack in the story execution it lies with present-day descendant Desmond, who is comatose and silent throughout most of the game. Collecting Animus fragments in Constantinople opens first-person puzzle levels for Desmond, which are unwieldy and — again — out of place, but at least offer a unique way to relive Desmond’s pre-Animus life.

Last year’s Assassin’s Creed: Brotherhood might have been cosmetically similar to its predecessors, but it was also a showpiece for the marriage of storytelling and gameplay. Revelations’ clumsy new ideas make it a trickier sell and, ultimately, skipping it won’t make a lot of difference story-wise. If you’re invested in the travails of Ezio, the few answers in Revelations make it a must-play, but it’s the first game in the Creed series to feel inessential.