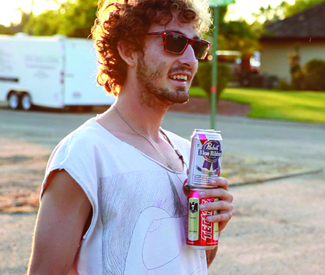 FILM Dragonslayer tags along with Josh “Skreech” Sandoval, a Fullerton, Calif. skater celebrated for shredding pools and living a vagabond’s life. First-time director Tristan Patterson fronts with the kind of side-winding portraiture that prizes sensory impressions instead of back-story, but whittle away Dragonslayer‘s loose ends and you end up with an unremarkable lost generation romance, a Bonnie and Clyde with lower stakes. If Dragonslayer‘s Sundance awards and Christine Vachon executive producer credit are any indication, Patterson’s combination of familiar character packaging and cool reality effects has already been a lucrative one.

The film meets Skreech at 23: he’s turned his back on sponsorship gigs and a romance that produced a son (no trace of the mother here). In an arbitrarily defined chapter structure, Skreech investigates freshly abandoned pools, squats in a friend’s backyard, shows off his medical marijuana license, and cracks tallboys in Southern California’s magic light. He’s stunned by a pretty girl’s red lipstick and fades into a relationship with her (it takes a while before the movie treats her as anything more than scenery). He takes a few earnest stabs at fatherhood and rehearses his principles of no principles to the soundtrack’s well-stocked bangs.

There are a few genuinely poignant moments — Skreech’s taking a call from his estranged mother in a bus full of punks — but in general Dragonslayer is too caught up in its own glossy reverie to register emergent emotions. Patterson’s tendency to use editing as dramatic shorthand is evident in an early sequence of Skreech muffing a skate contest abroad: repeated shots of Skreech wiping out are cut with the eventual winner’s triumphs and then back to our hero’s defeated expression. Arranged in the foregone style of reality television, the actual event is given no room to breathe. This kind of telescoping becomes even more calculating when Patterson treads into Skreech and Leslie’s garbled romance. Patterson seems eager to place the movie in the tradition arty wasted youth pics (take your pick), but Dragonslayer‘s riskless form makes like Real Skaters of Orange County.

Skreech’s interesting face is the only thing that counts. Like a punk Giacometti, he appears very differently from one angle to the next. His rotating hairstyles and t-shirts provide visual fizz, and he’s also good for sweetly stoned bits of dropout philosophy. With all that said, it’s difficult to imagine Patterson pulling off the same frictionless portraiture with one of the punks squatting in Oscar Grant Plaza — someone, that is, who would necessitate difficult editorial decisions. I didn’t love Matthew Porterfield’s 2010 Putty Hill — another portrait of lost youth with plenty of other elements in common — but its canny diffusion of grief and formally inscribed layers of knowledge make for an instructive comparison with Dragonslayer‘s shallow depths. The filmmaker’s hand is both invisible and inescapable in Dragonslayer, its main purpose to score the artistic equivalent of a contact high.

After inking Skreech with a tribute to his son, a tattooist speaks wistfully about how the young man’s wild style hearkens back to the days before skateboarding was another ESPN sport. For his own part, Skreech listens to the Germs when he’s cruising Fullerton with his infant son. There’s an interesting question of punk nostalgia lurking here, but Dragonslayer is too caught up banking a pretty picture to address it.

DRAGONSLAYER opens Fri/18 at the Roxie.