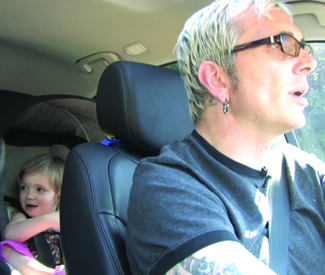 TRASH The 1980s U.S. hardcore punk scene was one refreshing bastion of opposition in the Reagan era of militaristic, monetary, and quasi-“family values” conformism. But it was also increasingly a turn-off for folks who liked the music and the message but not the violence at shows.

Rather than leaving the rest of us to pogo in peace, inevitably a few shirtless yobbos would turn the mosh pit into an ever-widening demolition derby that typically devolved into punches. First girls left, then finally bands depressed by every gig turning into Fight Club. Sure, the perps wore mohawks, maybe even waxed pious about being straight-edge. But the sentiment applied: frat bratz, go home.

Still, it was a fairly harmless outlet (if also a factory) for all that excess testosterone. Boys will be boys, etc. Sooner or later they’d have to grow the fuck up. Right?

Well, wrong. Punk became punk-pop, embraced by the musical product divisions of multinational corporations everywhere, and while the chords didn’t change much, the lyrics stopped being angry about political-economic injustice — now they were about the kind of dubious injustice one might summarize as “I know I was a jerk but I’m a rebel and anyway who does that bitch think she is leaving me without a girlfriend WHAAAAAAAAAH.” The Adolescents were one thing; permanent adolescence is another. How (let alone why) do you grow up when label execs and fans want you to stay the guy who causes shoulder dislocations worldwide?

Illustrating one gun-to-head route toward responsible adulthood is Andrea Nevins’ The Other F Word, a fun if superficial new documentary in which the missing unmentionable is (gasp) fatherhood. Punks become dads! Like whoa! Break out the swear jar!

Much of this is cute. But the notion that getting older and more sedate is any more revelatory in a 45-year-old man from a 20-year-old band than it is for the rest of us seems questionable. Our principal guide is very likeable Pennywise leader Jim Lindberg, seen getting less and less happy with his road-to-family-time ratio, given an endless touring schedule and three daughters who miss daddy (and vice versa). Many lifers came to punk from broken homes; Art Alexakis from maybe-not-so-punk Everclear, who endured horrific childhood abuse, touchingly stresses “I’m raising my kids the way I wish I’d been raised.”

Some other interviewees here — I won’t name names — look like parental recipes for future therapy. A deeper documentary might have probed that, while asking wives and kids for their two cents. But F Word seldom gets past the surface “shock” appeal of heavily tattooed, aging bad boys changing nappies and joining the PTA. It’s still stuck in a testosterone zone most of its subjects have at least learned to compartmentalize. (Dennis Harvey)

THE OTHER F WORD opens Fri/18 in Bay Area theaters.