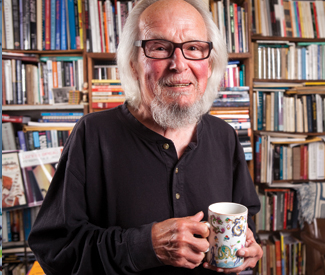 GOLDIES “This isn’t a conflict of interest, I hope?” David Meltzer asks. We’re smoking on the back porch of his Piedmont apartment with his wife, poet Julie Rogers, about two bottles of wine into our interview, wondering whether he’s the first former Guardian contributor to get a Goldie. A decade or so ago, he was writing CD reviews and the odd feature on anything from pedal steel guitar to new age music. But Meltzer had made a reputation long before, as the youngest poet (along with Ron Loewinsohn, now a UC Berkeley professor) in Donald Allen’s seminal New American Poetry (Grove, 1960). Now, at age 74, he’s fresh from his latest achievement, When I Was a Poet, chosen by Lawrence Ferlinghetti as #60 in the City Lights Pocket Poets Series.

Between these two events he’s made so many distinctive contributions to Bay Area culture that his foray into music journalism for the Guardian is simply characteristic of his protean endeavors. Indeed, his musical endeavors alone would earn him a place in San Francisco history, beginning with his late ’50s jazz poetry readings at the Cellar. In the mid-’60s, Meltzer hosted the Monday night hootenannies at the Coffee Gallery — folk jam sessions attracting visitors like David Crosby, as well as now-legendary locals like Jerry Garcia — as well as performing there regularly with his late first wife, Tina Meltzer (who died in 1997).

“It was the genesis of the SF rock scene,” Meltzer says, and he soon found himself, like Dylan, “going electric,” as guitarist, songwriter, and co-lead vocalist of the Serpent Power, a psychedelic folk band featuring Tina on vocals and poet Clark Coolidge on drums, along with stray members of the Grass Roots. Released on Vanguard Records in 1967, Serpent Power’s eponymous LP went nowhere at the time, but in 2007 was named #28 on Rolling Stone‘s top 40 albums of the Summer of Love (which, if you think of the number of classics released in ’67, is extraordinary). As an example of the possibilities of long-form rock, the 13-minute, album-closing “Endless Tunnel” is widely considered ahead of its time.

Meltzer’s a natural raconteur — easily outlasting my digital recorder — because his life’s been so extraordinary. By the time he moved from L.A. to SF in 1957, first inhabiting the window display area of a defunct radio repair shop at 1514 Larkin, the Brooklyn-born Meltzer was already a former child performer on radio and TV, as well as a recent participant in the art scene around Wallace Berman. But SF was an irresistible lure for a 20-year-old poet.

“It seemed to be the place of a kind of creative surge,” he recalls, having already encountered Pocket Poets books such as Ferlinghetti’s Pictures of the Gone World (1955) and Allen Ginsberg’s Howl (1956). “I needed to be in a place where you dealt with language rather than paint and images.”

“Of course, when I got here, the first place I went to was City Lights,” Meltzer continues. “It was much smaller back then, like a more proletarian Gotham Bookmart, with an emphasis on literary production.”

By 1961, Meltzer would find himself co-editor of the first issue of City Lights’ occasional Journal for the Protection of All Beings, the first of several projects he worked on at the press. But, despite Ferlinghetti’s admiration for his work, When I Was a Poet is Meltzer’s first book of poems for City Lights, some 54 years after his arrival. “It’s just one of those things,” says Meltzer, who published many books over the years on presses ranging from Black Sparrow to Penguin.

Space precludes a full rehearsal of Meltzer’s career, and significant items — such as editing the poetry and kabbalah journal Tree in the ’70s or co-founding the New College poetics program in ’80s — can only be mentioned in passing. His precociousness has engendered a sort of perpetual youth, and you can still find Meltzer giving readings around town, solo or in tandem with Julie Rogers. He remains one of the key people who make San Francisco great.