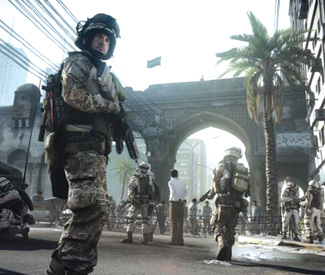 GAMER It’s disappointing that a Battlefield 3 review has to begin with a discussion of Call of Duty, but we can’t ignore the elephant in the room. For months, the Battlefield team has been shooting barbs at Call of Duty, warning the makers of the best-selling video game in the world that they intended to steal the Brown-War-Shooter crown. The previous Battlefield release was a multiplayer surprise success, performing just below Call of Duty for the better part of a year, and Swedish developer DICE intended to go all the way this time.

Well, the time has come to evaluate the threat. And while the multiplayer delivers on the promise, the rest of the package makes those earlier boasts seem a little premature.

A significant number of Battlefield fans never touch the single-player campaign, bypassing it to dive right into the online experience, and this time they aren’t missing much. In search of authenticity, the campaign takes a deliberate approach to combat, but it feels old hat. Most action takes place in corridors — not Battlefield‘s strong suit — where soldiers pour into an area and you have to clear them out. Yawn. You start thinking, maybe Call of Duty was right to juice up their ostentatious campaigns in the name of fun.

In the campaign’s second half, DICE comes around on Call of Duty‘s strengths as well, feebly aping that series’ better bits: a nuclear threat, car chases and shootouts in the streets of Paris and the NY subway. It’s not just disappointing that the levels are unmemorable and derivative, it’s a shame there’s no real exploration of the team-based combat that makes the series unique.

And yet: it’s revealing that for the reviewed Xbox version, Battlefield 3’s campaign comes on the second of two discs; the campaign itself is negligible. Battlefield‘s roots are multiplayer, where their Conquest and Rush modes prove that war is not just about killing, it is about cooperation. Whether you’re driving friends around in a jet, helicopter, or tank, fixing vehicles or attacking capture points, Battlefield is more than a shooter, it’s a full war experience. Undeniably, having 64 combatants on the field in multiplayer makes PC the go-to version if you can afford the rig.

Despite how much went wrong with the story missions, if you approach Battlefield 3 with the right expectations, it comes out largely unscathed. DICE’s multiplayer offers up massive vistas and the opportunity to feel like an essential cog in the war machine. Will it take this year’s Brown-War-Shooter crown? The online community will suss that out for themselves, but until DICE can deliver a complete package, I suspect Battlefield will have to learn to share.