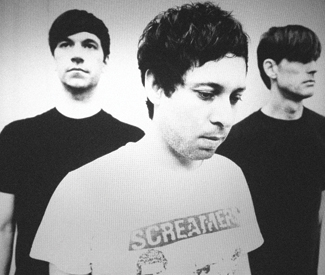 MUSIC “The reason why my rhythms are so repetitive and feel almost infinite is that, in a way, I fear closure. In the same way that I can never finish a book, I have trouble ending my songs. I have trouble ending anything. I can’t even finish a meal,” Luis Vasquez, frontrunner of the Soft Moon, tells me. (The group plays Mon/31 at the Independent.)

Thinking about beginnings is equally problematic. The Soft Moon is a music project built on unsettled grounds. It’s magnetized between the poles of late 1970s and early ’80s post-punk, the motorik beats of techno and Krautrock, and organic forms of Afro-Cuban poly-percussion, but all equally disrupted from their roots, on a search for some other destination.

The anxiety about endings is strange, on the surface at least, because Vasquez — singer, songwriter, multi instrumentalist — has accomplished more than your average procrastinator. Since last year’s self-titled debut on Captured Tracks, a desolate and rapturous composition, the Soft Moon has steadily seduced a devoted listenership. Vasquez, along with fellow Bay Area-based musicians Justin Anastasi on bass and Damon Way on drum machines and synthesizers, just performed a few shows on the East Coast after returning from tour in Europe earlier in the summer. The band is also working on material for a second full-length and preparing for the release of a new EP, Total Decay, coinciding with a launch party on Halloween in San Francisco.

Songs by the Soft Moon often begin in full throttle, as if they’ve already begun. They move forward carried by the sheer propulsive gravity of their engineered drum patterns — driving their gutted vehicles according to shapes and zigzags, towards endings that dissolve, break in static, submerge into chaos, or collapse abruptly as if the frequency on the radio has just changed or connection suddenly lost. Despite whatever glimmer of hope or flicker of light is carved out by the oscillating guitar strums and the burning synthetic melodies, the songs never find their way out of claustrophobia.

They have geometrical names: “Circles,” “Parallels,” or frightening ones: “Tiny Spiders,” “Dead Love.” They conjure moods of loss: forgotten memories, clouded nostalgia, a future that never came to pass, harrowing desire, and love. Vasquez doesn’t sing so much as chant in a corrosive whisper, “You can’t pull yourself out of the fire,” or he screams, yells, moans, gurgles from the depths — his voice degenerates into a mechanical short-circuit, primal electric emotion. “I don’t know what it is about endings,” he says. “Maybe I want to hold onto the moment. Sometimes I take a snapshot of it as if it’s still there. Maybe it’s simply my fear of death.”

The substance of the Soft Moon is raw, cutting. Yet the music feels good, even approaches heights of euphoria. Streams of pleasure charge the rawness; optimism suspends fear. It’s delivered in pop formulas, forged from hours, years of digesting Prince, Madonna, Joy Division, Kraftwerk. But the Soft Moon also turns pop upside down. Hope is never realized. Familiar intensities of pleasure and desire are disturbed. The music spurs an emotional awakening in your guts, in the ghost of the machine that beats its mechanical rhythms on and on. A haunted undercurrent of pop washes up on the shore — like all promised lands, a tragic place.

Vasquez thinks the Soft Moon evokes his childhood growing up in Victorville, a suburban desert community nestled in the heart of the Inland Empire just outside of Los Angeles. He recalls empty space, tract houses, malls, skies that went on forever, blinding flashes of sunlight, and a soft moon hanging low in the horizon. He remembers riding in the car for endless stretches, the rhythms of commuting, “isolated in music as if it was a sanctuary.”

I ask, so how do you ever finish a song, at least in the sense of putting it out there? “I just abandon them,” Vasquez says. Why bother making them? “I get attached to songs and put a lot of effort into making them. Occasionally they become revelations for me.” How do you recuperate your abandoned revelations when you perform, repeating all over again what you could never finish in the first place? “When I play live, it gets to a euphoric level, and it’s very cathartic, but I never get a sense of overcoming anything. Or the overcoming is really only my chance to express something to the crowd, to be vulnerable, finally.”

Perhaps the Soft Moon’s most revelatory song yet is “When It’s Over.” It’s something of a post-apocalyptic nightmare, anticipating the end, a bleak and empty one, and at the same time recovering the traces of a past, revealing the specters and ghosts that still inhabit the present. Recurring dreams serve as inspiration; “You know, the typical: alien invasions, planets colliding, comets, the sun exploding — very cosmic — the earth stopping, or falling,” he says. “It always has something to do with the galaxy. It’s always so devastating … I never could finish [Cormac McCarthy’s] The Road either.”

The EP, Total Decay, follows these same themes of temporal and planetary displacement, or rather, diaspora. But the core engine, and enigma, of these songs is always one full of life, vital and imaginative. “I want to hold onto the organism, since technology is developing so fast that we have difficulty adapting.” Vasquez says. “Body, sensitivity, emotion, skin, flesh, blood — I think that’s why the nostalgia is so prevalent in the music.”

The Soft Moon holds on just as equally to the machine. The songs are produced organisms, synthesized from spirit and electronics; they are born, grow, mature, and wither away. In “Total Decay,” swirling alarms disperse, echo, derail into static breath. Synthetic wind gusts into the hypnotic poly-percussion of “Visions,” dancing frenetically around punctuated low end bass. Claps chatter and keys bubble up from the ether, and return to their source, without justification, just as suddenly. *