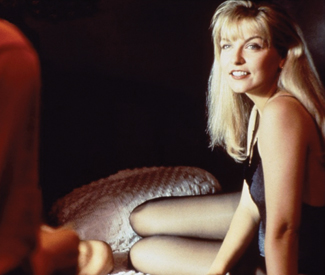 FILM In 1990, cable was still a luxury many chose not to afford. The Big Three — it was now grudgingly being admitted that Fox might make it Four — weren’t doing anything all that different from what they had a decade or two or three before. Certainly the popular likes of Major Dad, Beverly Hills 90210, and America’s Funniest Home Videos weren’t exactly rocking the boat as thus far known to viewers and sponsors.

Then came Twin Peaks, which most ABC executives had thought a grievous mistake. Principal writer Mark Frost had the successful Hill Street Blues under his belt, but co-creator David Lynch’s four movies hadn’t remotely seemed to qualify him for America’s living rooms. The Elephant Man (1980) was a prestige project for which he was a hired hand, still his most “normal” film even if eccentric by most other standards; Dune (1984) was an expensive disaster fan-editors are still trying to salvage. Blue Velvet was the most perverse Americana joke imaginable in 1986, a screen year otherwise defined by Top Gun. As for Eraserhead (1977) — well, never mind.

Debuting in April of 1990, Twin Peaks took Velvet‘s surreal juxtaposition of Eisenhower-era small town idyllicism with hair-raising behavioral excesses, then stretched it semi-mockingly over the broad, flat ensemble canvas of Peyton Place — a trashily soap-operatic bestseller and TV series whose movie incarnation Frost-Lynch screened for inspiration. The notion of innocence defiled almost beyond comprehension was crystallized in their startling image of a homecoming queen beatifically dead, plastic-wrapped, washed onto the riverbank of her picturesque Washington state burg.

“Who killed Laura Palmer?” briefly gripped the nation, just as “Who shot J.R.?” had 10 years earlier. Two decades ago everything tasted better when drizzled with the special chocolate sauce of “postmodernism,” and Twin Peaks was the most ironic cherry pie vehicle for that addictive popular culture had yet baked up. It was so cool you could hardly believe it was actually being watched.

Then it wasn’t, making for one of the medium’s brightest, fastest flameouts. But naturally its cult has endured, despite so many home-viewing releases since compromised by laziness and rights issues, not to mention the colossal buzz kill of 1992’s first/last big-screen spin-off. Its actors have aged, and in numerous cases not prospered. But Twin Peaks itself is like Dorian Gray, forever ageless, seductively not-quite-right.

You can indulge your undying love at the Roxie, when a more-or-less “20th Anniversary Tribute” offers close to six consecutive hours of Peaks-iana. Co presented by short-range nostalgists Midnites for Maniacs, the evening commences with Otto Preminger’s noir-ish 1944 Laura, another story about an obsessed-over dead babe that was an apparent influence on the much later series.

Things begin in earnest with the 90-minute Peaks pilot, directed by Lynch himself. Swaying to the drugged prom dance themes of Angelo Badalamenti’s signature score, it introduced an incredible range not just of characters but of actors, both running the gamut from dewy to screwy.

Beyond those luscious youths (Lara Flynn Boyle, James Marshall, Sherilyn Fenn, etc.) who all seemed poised to become movie stars — particularly Sheryl Lee, whose Laura Palmer incited such mania that the Seattle “local girl” cast simply to be a corpse was brought back as a hastily conceived doppelganger — there were ex-actual movie stars (Piper Laurie, Richard Beymer, Russ Tamblyn), faded TV stars (Michael Ontkean, Peggy Lipton), David Lynch “stars” (Eraserhead himself, Jack Nance), miscellaneous oddjobs, and onetime “Elizabeth Taylor of China” Joan Chen. The latter never seemed quite to know what she was doing there, but then she wasn’t supposed to be — Isabella Rossellini had dropped out. Bemusedly observing all was Kyle MacLachlan’s apple-cheeked FBI Agent Dale Cooper, a Lynchian alter ego willing to plangently wade into swamps of teenage prostitution, cocaine deals, surreal dwarf fantasias, and so forth — as long as he could break for a cuppa diner joe and more of that fine pie.

Alternately queasy, campy, and swoony, Twin Peaks had it all. With its unending parade of lurid revelations, not excluding occult ones, the whole miraculous brew constantly threatened to sink into self-parody. Many thought it did so in the second season. ABC’s shuffleboard scheduling dealt further death blows to a fickle mainstream audience that had decided they weren’t sure if they cared who killed Laura Palmer anyway. (Lynch would have preferred the mystery remain unsolved.)

Still, the fanatics who remained made it seem viable to roll camera on 1992’s Twin Peaks: Fire Walk With Me (the Roxie program’s final feature) just after the show’s cancellation. No longer writing with Frost but Robert Engels, Lynch saw it as the first in a feature trilogy that would expand and complete the Peaks universe.

That was not to be. Booed at Cannes, Fire tanked everywhere but Japan. As with everything Lynch has ever done, it has defenders. The worse the project, the more vehement the defense, and as very possibly the worst of all, Fire is some folks’ notion of a cruelly maligned masterpiece. The director shot over five hours of material; should those umpteen deleted scenes ever surface, you can bet on a corrective-fan-edit frenzy.

In the meantime there’s still just the movie, as infuriating as the show was frequently great. It’s also (very) occasionally great, which itself is infuriating. The first section (starring Chris Isaac as Agent Non-Cooper in Upside-Down Pin Tweaks-ville) is the smug, dumb, garish self-parody the series never quite descended to. Eventually things come in to relative focus around Laura Palmer’s final week on Earth, building toward a surprisingly blunt religious fall-ascension, complete with literal angels.

The hellfire bits do have their moments, like scary Bob (Frank Silva) slithering into a bed, or driving two leashed girls at the end like panicked farm animals to slaughter. But the heightened gore and nudity seem pandering; fascinating Lee, 18 going on menopause, is made to totter around like a cokehead version of Bette Davis in Beyond the Forest (1949). There is dialogue as gee-whiz as Laura answering “Nowhere fast!” when asked “Where you going?” by Donna (Moira Kelly replacing Boyle, which doesn’t work); and as crass as demon-addled daddy Leland (Ray Wise) telling daughter “Let’s get your muffin!” en route to breakfast and the apocalypse. What is David Bowie doing here? As the New York Times review noted, such useless incongruities “would have made [just] as much sense inserted into a segment of Golden Girls.”