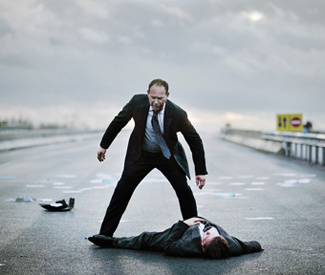 FILM The San Francisco Film Society’s annual French cinema roundup stretches its national mandate a bit this year. Take the Dardenne brothers’ The Kid with a Bike, one of the best films of the year regardless of country of origin but like the rest of their work particularly fixed in the (French speaking) Belgian working class. It begins in motion, as adolescent Cyril (newcomer Thomas Doret) desperately redials his father’s disconnected number from a foster home. He refuses to accept a social worker’s calm explanation that his father has left without a forwarding address, breaking away for the first of many wild flights. Already we’re navigating a complex identification with the boy, rationally removed from his situation at the same time that we are viscerally attached to it.

The Kid with a Bike paints a remarkably sure portrait of adolescent pain. Several critics have made much of Cyril’s tendency to bite, but I found those moments where he simply shuts down even more disquieting, in no small part because the narrative flow is temporality blocked. Though Cyril is eventually given refuge, it’s as difficult for the boy to accept a hairdresser’s kindness as it is for him to resist a neighborhood tough’s illusory promise of self-emancipation (the actors playing these peripheral roles are excellent, layering coming-of-age formulas with fallibility and grace). The latter conscripts Cyril for a violent act, one which in spite of its petty nature holds enormous consequence in the narrative’s web of responsibility and guilt. It is difficult to imagine a contemporary Hollywood movie maintaining such moral complexity in the face of a child’s loss of innocence.

Finnish auteur Aki Kaurismäki maintains his particular approach to faces and pacing in his first Gallic effort, though Le Havre consciously raises the ghosts of French cinema, specifically postwar resistance dramas and the neighborly realism of filmmakers like Marcel Pagnol. The director accents the timeless quality of the titular port with his classical framings and muted color palette even as his story directly refers to modern Europe’s anxieties. An elderly shoeshine man freighted with the name Marcel Marx (André Wilms) discovers a young African boy hiding out from the immigration authorities under Le Havre’s docks. With his wife ill in the hospital, Marx takes the boy in, eventually raising funds to smuggle him on to his mother across the English Channel.

The community that coheres around Marx is familiar from any number of partisan allegories: there are the good Samaritans who help Marx shelter the boy; the faceless nosy neighbor who calls the police; the world-weary souls at the neighborhood bar; the leery inspector who seems hesitant to carry out unjust orders; the misty invocations of the past and hard talk of money; the final Casablanca-like rapprochement between Marx and the inspector. A restrained melodrama, Le Havre is that rare film where everything that turns out right suggests the opposite. The artifice of the style and plotting are meant to produce a hesitation, certainly, but the remainder is an honest yearning for justice. If it seems odd that it would take a Finnish director to call upon France’s better angels, that’s part of what gives Kaurismäki’s traditionalism just the right touch of provocation.

Also worth checking out is Pierre Schoeller’s fascinating train wreck of an information age political thriller, The Minister, starring longtime Dardennes player Olivier Gourmet as a compromised bureaucrat. The Long Falling, Martin Provost’s second match up with actress Yolanda Moreau after Séraphine (2008), purposefully shuttles from a hardened Belgian village to an unmoored Brussels and features Agnès Godard’s characteristically probing camerawork, itself a pride of French cinema. I wasn’t able to preview Mia Hansen-Løve’s Goodbye First Love, but if the director’s wise and poignant second feature, The Father of My Children (2009), is any indication, it might well prove another highlight of an already strong French Cinema Now program.