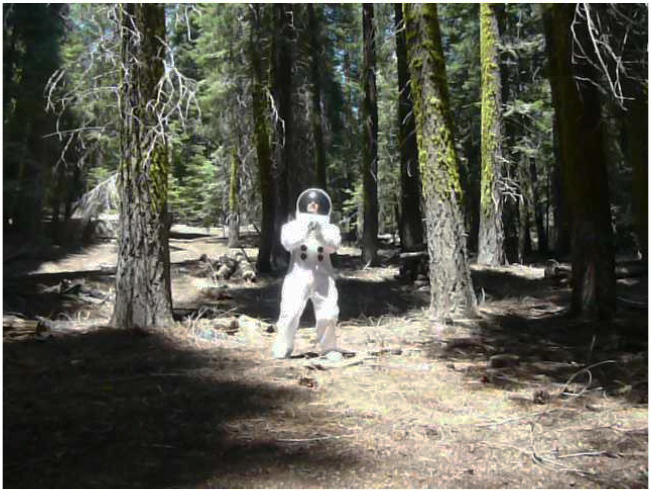 HAIRY EYEBALL Sometimes it seems like Americans would rather undergo a root canal than honestly talk about race in this country. Witness the rounds of recrimination and defensive posturing on all sides that followed the Washington Post’s recent front page story that the hunting camp Texas governor Rick Perry has long frequented was formerly known as “Niggerhead.”

Perry acknowledged that the camp’s original name was “offensive,” and in a move akin to the white paint that Perry’s own father brushed onto the rock on which it is carved, tellingly declared, “[it] has no place in the modern world.” This is a story a lot of people, not just Republican Texans, like to tell themselves about racism — it’s all in the past, or, if racism manifests itself presently, it is a crime committed by only the most egregious and malicious perpetrators. It’s this kind of magical thinking that makes a narrative like The Help, with its privileged-but-sympathetic heroine giving her cartoonishly racist sisters their comeuppance, a guaranteed best-seller and a box-office draw.

How refreshing then is SHIFT, a series of solo projects by Bay Area artists David Huffman, Elizabeth Axtman, and Travis Somerville newly commissioned by the San Francisco Arts Commission. Employing different mediums and narrative strategies—crowd-sourced community intervention (Axtman), historical reconstruction (Somerville), science fiction-tinged Afro Futurism (Huffman) — each artist works through the messy business of how race is lived in America today in ways that are deeply personal, and at times, politically oblique.

Huffman’s contribution, “Out of Bounds,” which takes over most of the SFAC’s Van Ness gallery space (401 Van Ness, SF), packs the most visual impact of SHIFT’s three propositions and also leaves the most dots to connect. At its center is a towering pyramid of 650 basketballs, held in place solely by gravity and a simple wood frame at the pile’s base. The smell of rubber hits your nostrils before you have a chance to take in the piece visually.

Huffman, whose background is in painting, has materialized this formation before in a 2006 series of mixed media canvases which depict similar heaps of balls next to barren trees, as if they were piles of raked autumn leaves. Its current sculptural incarnation is far more monumental, like some arrangement of mythological fruit. But unlike Jeff Koons’ 1985 hermetically-sealed, readymade “Three Ball 50/50 Tank (Two Dr. J. Silver Series, One Wilson Supershot),” Huffman’s pyramid is in fact temporary: the balls will be donated to local charities after the piece is deconstructed.

Spheres and pyramids abound throughout “Out of Bounds,” as Huffman — who is African American — uses basketball as a kind of metaphoric lingua franca across his videos (his first pieces in the medium) and abstract paintings of astronomic clusters of balls to convey other forms of travel, whether across racial or temporal lines. Not everything translates, but maybe that’s the point. The sight of a spacesuit-clad Huffman comically embracing his way through a grove of redwoods in the video “Traumanaut Tree Hugger” is both silly and discomfiting, a humorous send-up of the supposed color-blindness of progressive politics and an unintended portrait of total isolation from other humans.

Less ambiguous but certainly more ambitious is Axtman’s ongoing video project “The Love Renegade #308: I Love You Keith Bardwell (Phase 1),” on view at the Van Ness gallery and which the artist is also showing in a series of community screenings. “The Love Renegade” responds to a 2009 incident in which Bardwell, a former Louisiana Justice of the Peace, refused to marry a mixed race couple fearing the rejection they would face by society. In response, Axtman interviewed mixed race couples and the children of mixed race couples who talk about their lives and assure Bardwell that it’s gotten better for them, ending their testimonials with a pledge of unconditional love to Bardwell.

Somerville’s moveable mural “Places I Have Never Been,” on display at SFAC’s Grove Street (155 Grove, SF) window space, is perhaps SHIFT’s most conventional component in terms of its chosen medium. Focusing on six pivotal moments in Bay Area history that affected various minority populations, Somerville has rendered iconic imagery from each event onto the six sides of large cubes that stack on top of one another to create a 10×14 foot wall that when placed together forms a large-scale painting across all its faces. Some of the events, such as the internment of Japanese citizens during WWII or the White Night riots, are more familiar than others (the 1966 Hunters Point uprising that saw residents facing off against 1200 National Guard troops).

Even though I started out this review discussing current events, I’d feel like I was underselling SHIFT if I simply called it timely. The point is that Huffman, Axtman and Somerville have taken the time in the first place to think through one of the most fraught, at times ugly, and always ever-present categories that we must continue to live with. The pieces in SHIFT are discussion prompts not diagnoses. And although they’re articulated with varying degrees of direction and clarity, at least they’re encouraging the conversation about race America never seems to be having to be broached in a way that’s not about blame or personal wrongdoing but accountability to each other.