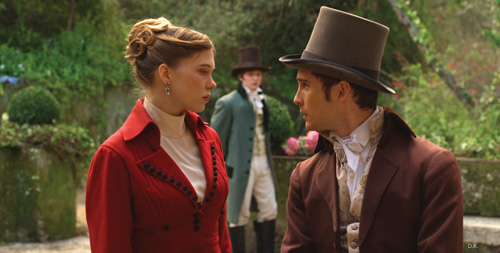 FILM The critic Quintín began his review of Mysteries of Lisbon in last winter’s Cinema Scope by noting that the film’s lavish production and strong reception marked a welcome turnaround for its director Raúl Ruiz, who in the years prior struggled with funding and illness. Though produced for Portuguese television, the film won awards and raves on the festival circuit. Suddenly, Ruiz seemed more assured his rightful status as a master. A year later Mysteries of Lisbon arrives for a rather miraculous theatrical run — but Ruiz is gone. He died in August 2011, having directed many more films than his 70 years.

Ruiz’s films have typically been the province of hardcore cinephiles, but this splendid epic holds wider appeal. It’s difficult to think of another movie that so satisfyingly captures the intricacies and volatilities of the 19th century novel — anyone enthralled by the teeming creations of Balzac and Dickens will find that Mysteries of Lisbon‘s four-and-a-half hours stream by. Ruiz was no stranger to the 19th century — his recent films included Klimt (2006) and the Proustian Time Regained (1999) — but the ornately plotted trio of novellas by Portuguese author Camilo Castelo Branco which supply these mysteries seem specially tailored to the director’s affinity for involved narrations.

The story sweeps across dozens of characters and several generations of doomed love, revenge plots, disguised identities, uncertain parentages, and religious vows. We even glimpse the Napoleonic Wars. It’s gripping stuff, in other words, and Ruiz meant it that way — the film refutes the idea that an analytical narration style upbraids narrative pleasure (a cornerstone of much structuralist film theory). One hesitates to launch into describing Mysteries of Lisbon‘s plot, not only because there’s such an awful lot of it, but also because it risks underselling the brilliant means by which information is divulged.

It begins with an adolescent searching out his origins. Pedro da Silva lives under the care of kindly and knowing Father Dinis. The boy becomes dimly aware of his mother, Angela de Lima, when he’s sick with fever (realized with a neat impressionistic distortion). In the film’s first flashback, to the near past, we learn of her cruel treatment at the hands of her husband, the Count of Santa Bárbara. She eventually flees to the church, whereupon her history of misfortune tumbles out in a deeper flashback narrated by Dinis: her passion for Pedro’s father and the iron disapproval of her father, the Marquis de Montezelos. After contracting the elder Pedro’s murder to his thug, Knife Eater, Marquis arranges for the man to snuff out his daughter’s bastard child at birth. A gypsy bargains for the baby’s life from Knife Eater, and that gypsy, we later learn, is one and the same as Father Dinis.

The priest’s shadowy transformations provide a recurring template for Mysteries of Lisbon, as does his eventual commitment to God. An intermission is shrewdly positioned so that the beginning of the second half begins with another origin story — Dinis’s own. The Samsaric wheel of lost love and filial abandonment turns again. A new set of characters emerge, including a mysterious capitalist posing as a Brazilian import who eventually marries the Count of Santa Barbara’s mistress, Eugénia, and takes a peculiar interest in Pedro’s well-being. His former lover, the bewitching Duchess of Cliton, lives for revenge and arouses the idealistic romance of Pedro, now a young man: it seems we’ve spun through the past long enough for him to age.

Delirious yet? That narrow introduction doesn’t begin to convey the vertiginous experience of Mysteries of Lisbon‘s discoveries and resonances. By moving steadily further from the young Pedro’s frame of reference, Ruiz suggests that every doomed love is its own even as they are invariably connected. The immersive nature of the flashbacks all but obliterates any semblance of Pedro’s narrative through line, and leaves us vulnerable to alluring déjà vu (key repetitions of specific objects, framings, and dialog within different spheres of the plot). If Ruiz is partly poking fun at literary convention by repeatedly framing eavesdroppers in the extreme foreground and backgrounds of the frame, for instance, he’s also giving us tangible figures of the thread that connects these disparate stories.

Ruiz’s narrations are commonly likened to labyrinths, but for Mysteries of Lisbon‘s vigorous expansion I reach for the cosmos: one luminous sphere rotates another which in turn rotates a larger system, the whole of it spreading outwards in all directions at once. There are many other ways one could model the narrative’s abundance — in interviews Ruiz cited the mathematical concept of overflow — but the point is not so many films inspire this kind of reflection. And if complexity is one measure of the film’s greatness, flexibility is surely another. Throughout, Ruiz demonstrates that a distant long take need not be emotionally remote; that a shot can reveal as it conceals; that dramatic irony can fluctuate, giving knowledge itself an almost textural quality.

In one of the few scenes set outside a gilded room or convent, the older Pedro searches out his mother’s grave. There he meets his grandfather, the formerly imposing Marquis, now a deluded blind beggar. It’s the umpteenth case of a character cropping up in a different mask, and this one seems the most obvious kind of poetic justice. As the Marquis exits, his beggar companion approaches Pedro. He redundantly recounts the Marquis’ fall, but then adds his own insight, that nobility’s great tragedies are simply the stuff of life for beggars. Ruiz remains light on his feet well past the four hour mark, always prepared with another shift in perspective. Mysteries of Lisbon is not the kind of masterpiece you expect of an old man, but then Ruiz clearly had little use for such a simplistic concept of time.