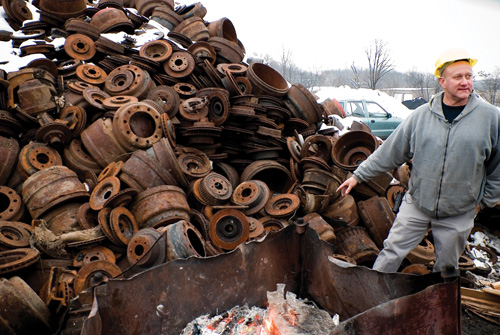 FILM Has the landfill, junkyard, and lowly dumpster supplanted the factory as a site of documentary interest and even inspiration? Yerba Buena Center for the Arts features two 2010 docs this week to add to the growing list of recent films centering on scavenging, gleaning, dumpster diving, trash humping, and scrapping — activities illustrating resourcefulness in the shadow of colossal waste.

Scrappers zeroes in on the workaday routines and liabilities facing two laboring subjects, Oscar and Otis, good men who cruise Chicago’s South Side for scrap metal. The film’s three directors spent a couple of years in the passenger seat, long enough for their verité portrait of the scrappers’ lives at work to be anchored in extenuating circumstances: a deportation scare for Oscar, a hospital stay for Otis, and most significantly the collapse of scrap prices as a result of dwindling home construction (the same ton of metal that sold for $200–<\d>$300 in 2007 only brought in 20 bucks in 2008).

Without recourse to a voice-over, Scrappers details economic unrest as well as the complex race and class hierarchies of Chicago’s scrap scene. This is all secondary, however, to the film’s enduring interest in learning how Oscar and Otis actually go about their work — noteworthy in a documentary field crowded with predigested arguments. The filmmakers take liberties in editing together the scrappers’ talk into poetic monologues, but it’s a small price for granting them autonomy in defining not only the necessities but also the dispensations of their work.

While Scrappers works to convey layers of ongoing experience, the Oscar-nominated Waste Land is witness to an exceptional intervention. The film follows Vik Muniz, a successful Brooklyn-based artist originally from São Paolo, as he spearheads a collaborative art project in Jardim Gramacho, a gigantic landfill outside Rio de Janeiro. Muniz first contemplates the site from his Brooklyn studio using land art’s modern surveying tools, Google Earth and YouTube. Once on the ground, his initial disbelief at the scale of the landfill gives way to the more modest realization that many of the pickers working there don’t view themselves as the wretched of the earth.

Waste Land director Lucy Walker omits Muniz’s selection of a handful of the pickers as collaborators and subjects — a thorny process, one imagines — instead fleshing out the backstories of the (admittedly remarkable) chosen ones. They gather material from the dump to help Muniz fashion their iconic portraits back in the studio, with the proceeds of the finished work benefiting the pickers’ labor association.

Muniz’s giving act is more personal and sustained than a benefit concert, but the difference is one of quality not kind. He repeatedly stresses the project as a joint effort in making art of garbage, but the real magic consists of turning garbage into something priced as art, a conversion which undoubtedly helps the pickers but also solidifies Muniz’s privileged position in the world marketplace. In view of this, it’s worth pointing out that many other artists have adapted scavenger aesthetics as a means of dissenting from patronage systems (art or otherwise). In 1965, for instance, Brazilian director Glauber Rocha issued his “Aesthetic of Hunger” manifesto to define Third Cinema’s difference. Some years later filmmakers associated with the Tropicália movement went a step further and called for an “Aesthetics of Garbage.” Needless to say, they envisioned something different than Waste Land‘s sympathetic detachment. It’s not a fair comparison perhaps, but days after seeing the film I’m still bothered by the way it maintains a wry distance from Muniz’s earnest struggle for moral clarity while itself indulging in artsy portraiture of the pickers at work (scored to death by Moby). In any case, magnificent unsigned art grows out of landfill closer to home at the Albany Bulb. There’s a documentary about that too — Bum’s Paradise (2003).