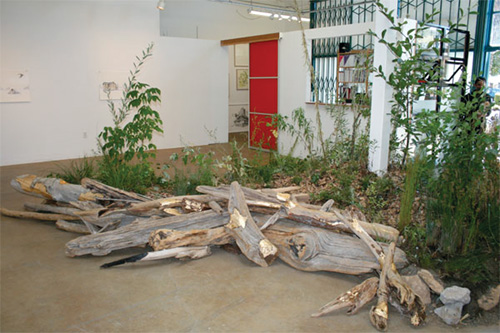 HAIRY EYEBALL If you follow Canyon Drive from Hollywood Boulevard all the way up into the hilly territory of Los Angeles’ Griffith Park, you’ll reach a cul-de-sac. Beyond that, accessible by foot, is a small stone bridge which leads to a dirt trail that eventually lets you out in what’s known as Bronson Valley. This is where you’ll find the Bronson Caves.

Even if you’ve never visited the caves in person, you’ve probably at least seen them: they’ve been used in countless motion pictures and television shows. One of the mouths served as the exterior shot for the Bat Cave in the original ’60s Batman TV series. Natalie Wood’s long lost Little Debbie is discovered in one of the caves in 1956 flick The Searchers. The caves also make cameos in plenty of schlocky, B-grade sci-fi and fantasy cheese of both classic (Invasion of the Body Snatchers, 1956) and more recent (The Scorpion King, 2002) vintage.

Given their status as one of the film industry’s leading landscape doubles, it’s only fitting that the caves aren’t actually caves. There’s nothing natural about them: they’re all that remains of an early 1900s quarrying operation to supply stone with which to pave the streets of a rapidly-growing LA. On a clear day, from the other side of one of the tunnels, you can get a seemingly eye level view of the Hollywood sign.

This long history of artifice amid geologic permanence is both everywhere and nowhere in Brice Bischoff’s series of large-scale C-prints of the Bronson Caves currently hanging at Johansson Projects. The caves are the photographs’ crispest formal feature, although it’s the dazzling and seemingly supernatural rainbow-hued blurs within and near them that first catch your eye.

The colorful shapes — which vary in form from blasts of light to smoky wisps — evoke both the caves’ history as a site for staged close encounters of the third kind, as well as nineteenth century spirit photography. They’re also simply beautiful to look at. Their origin, however, is more mundane: wearing raggedy costumes made from colored paper, Bischoff gestures before his stationary camera using the space of the caves to suggest a course of movement. The time lapse captured by the camera’s long exposure renders his presence ghostly while setting into relief the surrounding rocky proscenium, although the artist never disappears entirely. (In one photograph, there is the suggestion of a human form wrapped in the Jamaican flag.)

Even though Bischoff’s presence before the camera is required to create each image, his photographs are the opposite of performance documentation. Rather, they are formally and thematically similar to Hiroshi Sugimoto’s ghostly black and white portraits of old movie palaces, for which the photographer left his exposure open for the duration of a projected feature so that the screen appears as a glowing white light that illuminates the ornate architectural decor around it. So to do Bischoff’s photographs collate an accretion of instances which, individually, are less important than the location in which they’ve occurred. They bring to the fore a history which, at 24 frames per second, has always been relegated to the background.

For a more strenuous walk in the wild, you have to trek down Broadway to Jack London Square where at Swarm Gallery Colin Christy’s living installation “Wild and Scenic” throws scare quotes around both terms. For this non-earthwork earthwork Christy transplanted native and invasive plants found around the American River from Coloma, California to a dirt mound in the gallery. The plants are watered on a regular basis, and they’re painted with a bio-luminescent pigment to differentiate between native and non-native plants, so that Christy can track their growth patterns by taking long exposure time lapse photographs at night.

Of course, there’s another contender in this battle royale: humans. The pile of wood, glinting with patches of gold spray paint, that forms a sort of bulkhead on one side of the mound, references the role the American River was forced to play during the Gold Rush, itself a massive piece of terraforming that has indelibly altered California’s landscape. While drawing attention to this history of environmental degradation, Christy’s piece — in all of its gratuitousness — cannot help but be somewhat complicit in perpetuating its legacy. There’s life on the line, here, even if it isn’t human.