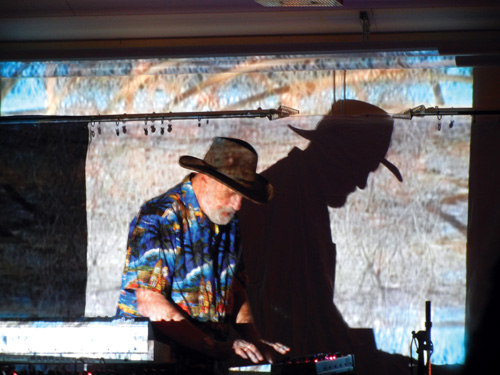 MUSIC One way in which to think about the development of what could now be called “ambient electronic music” is to trace the attempts by musicians who fall under that banner to work against and around time.

Terry Riley’s legendary all night concerts of the late ’60s and early ’70s were enabled by a simple tape delay mechanism he dubbed the “time lag generator,” which repeated and echoed the notes Riley repeatedly sounded whether on organ or saxophone. Brian Eno devised Ambient music as a way to make the passing of “free” time — whether spent (as in Eno’s case) bed-ridden recovering from an injury, or, as with his breakthrough 1978 album Music for Airports (EG), waiting for a departing flight — less noticeable. And experimental duo Coil took things to new extremes when they claimed that the slowly evolving synthesizer drones on their composed-under-the-influence-of-psychedelics 1998 release Time Machines were meant to “dissolve time.”

It is fitting then, that J.D. Emmanuel prefers to be thought of as a time traveler rather than as a musician (the self-designation is practically everywhere you look on his website). There is something undeniably transportive about listening to Emmanuel’s expansive meditations for synthesizer and electronic keyboard. Clusters of notes gradually coalesce and dissolve around a dominant drone. Occasionally, he’ll introduce field recordings of environmental sounds — birds, lapping waves, wind — into the mix, but these serve as compliments to the synthesized elements rather than as sonic footholds of the outside world (the point of Emmanuel’s music isn’t to hold on to anything, but to drift).

But, as is now so often the case, were it not for the Internet (another sort of time machine) far fewer listeners would be drifting along. The three LPs of ambient music that Emmanuel self-released in the early to mid ’80s were long considered grails for private press collectors until a Belgian label did a limited re-release of Wizards, Emmanuel’s second album from 1982, in 2007 (followed by its inevitable distribution on file-sharing networks). A compilation of electronic works from 1979-82 followed in 2009, and last year Important Records re-issued Wizards to a wider audience and much critical acclaim which lead Emmanuel to start playing concerts after a near three-decade hiatus.

His closing night set is undoubtedly one of the anticipated highlights of the 12th annual San Francisco Electronic Music Festival, whose location at the Brava Theater should provide a comfortable venue for time traveling without moving.

Emmanuel expressly admits that his own musical approach was greatly shaped by listening to Riley and Steve Reich in 1970. Riley, is in many ways, the Kevin Bacon of electronic music, and his name — along with Reich’s and that of their New York minimalist associate LaMonte Young — make up a cannon unto themselves, leading to inevitable comparisons when discussing younger artists working in a similar vein. The appearance at SFEMF by another elder statesman of drone, Bay Area composer Yoshi Wada, who will be performing with his son Tashi Wada (a composer in his own right) actually brings things full circle.

The elder Wada moved to New York in 1967 and got introduced to drone music via Young and later studied with Pandit Pran Nath, the great North Indian singer who was also Young’s teacher at the time. Their influence is audible in the sonorous, shimmering drones heard on EM Records’ steady output of re-issues of Wada’s two official albums and various concert recordings from the ’70s and ’80s. The younger Wada has very much continued to in his father’s footsteps, exploring harmonic overtones and dissonance in his own practice, and their joint headlining performance on Saturday night is bound to be resonant in more ways than one.