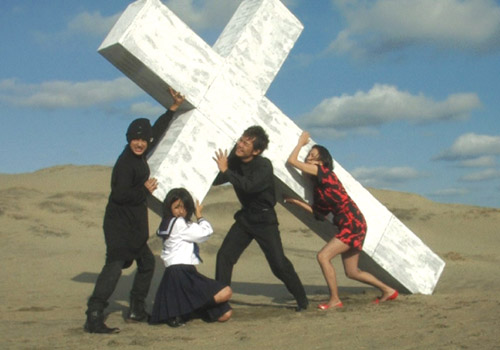 TRASH In the West we’ve basically known two kinds of Japanese cinema. One is that of Ozu, Kurosawa, Mizoguchi, and their inheritors — somber, formal, detailed. The other is the cinema of crazy shit: gangster and “pink” movies from the 1960s onward, cracked visionaries from Seijun Suzuki to Takashi Miike, the exercises in tongue-in-cheek fanboy excess like Tokyo Gore Police (2008) and Big Man Japan (2007).

Definitely falling in the gonzo category is Sion Sono, a poet-performance artist who’s been making (and occasionally acting in) films since the mid-80s. But awareness of his work abroad didn’t really spike until 2002’s Suicide Club, which famously opened with a chorus line of angelic schoolgirls cheerfully leaping into the path of a subway train.

Since then he’s made the first of two projected Suicide sequels, the surreal psychosexual nightmare Strange Circus (2005), and deadly-‘do J-horror exercise Exte: Hair Extensions (2007), to name a few. Though not in the Miike league of complete unpredictability (let alone productivity), Sono’s films have been a diverse lot, not excluding an exercise or two in straight-ahead naturalism.

The mega-dose of Sono that the Roxie offers this month, however, feels like two very large pieces cut from the same pie. Opening Friday is 2008’s Love Exposure, clocking just under four hours (not counting intermission); next up is 2010’s Cold Fish (starting Sept. 16), a comparatively succinct sit at 144 minutes. Such lengths might normally suggest epic longeurs and a meditative pace. Sono, however, fills each canvas to bursting with demented narrative turns, frantic activity, extreme emotions, and absurdist logic. Not to mention sizable quantities of over-the-top violence and warped sexuality.

Love Exposure opens with the claim that it’s “based on a true event,” which is no doubt its first joke. After the death of his saintly mother, youthful protagonist Yu (Takahiro Nishijima) adapts to the adoption of the priesthood by his father (Atsuro Watabe), though it’s harder to accept the eventual intrusion of an insanely needy new parishioner (a memorable Makiko Watanabe), a crackhead-acting real-life succubus who swiftly destroys dad’s faith and vocation. As a result Yu falls in with a bad crowd, becoming its Jesus in a weird pseudo-spiritual observance of taking “peek-a-boo panty photos” while remaining otherwise chaste in anticipation of meeting his own personal Madonna — Holy Virgin and Ciccone personae inclusive.

High school heartache, martial arts, Ravel’s Boléro, female impersonation, and the insidious manipulations of an agent (Sakura Ando) from the mysterious, Scientology-like Zero Church all factor prominently in a careening story whose takes on religion, sin, and redemption are nothing if not antic. Just what Sono is saying, however, tends to get lost in the blur. Exposure‘s sheer onslaught, not to mention its scale, have made bowled-over converts out of many viewers. Whether its crazy quilt requires 237 minutes, or 90, or 900 for that matter, is an open question — is the writer-director really going somewhere here, or just going and going and going?

Similarly occupied with indoctrination, masochism, and extreme behavior is Cold Fish, which is somewhat better able to sustain a tone of hysteria escalating toward dementia. An unhappy family (father Mitsuru Fukikoshi, daughter Hikari Kajiwara, stepmother Megumi Kagurazaka) is yanked into the orbit of a tropical-fish tycoon (Denden) who at first seems a boisterous benefactor providing shock therapy to their depressed lives out of simple altruism. But he and his bombshell wife (Asuka Kurosawa) soon reveal sides not just sinister but psychopathic, ensnaring all three in diabolical doings that encompass murder, rape, grisly corpse disposals, and more. Structured like Love Exposure as one long countdown to a transformative moment, Cold Fish pushes black comedy way beyond the bounds of taste with an oddly neutralizing good cheer. It’s a manic Grand Guignol set to the soothing kitsch strains of retro Hawaiian-flavored lounge music. (Dennis Harvey)