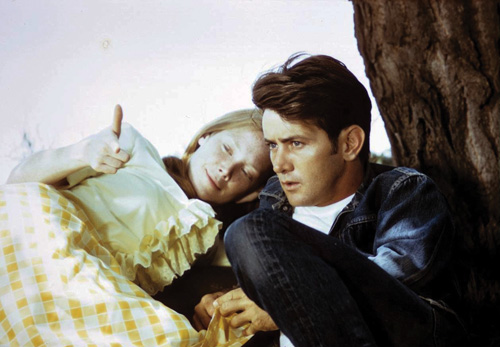 FILM Wanda (1970) takes a long time to settle into anything resembling a plot, but the wayward scenes at the start of the film have a remarkable exactness to them. In one, the title character (played by director Barbara Loden) walks into a dingy bar looking to end the day early. She’s fresh from divorce court, where she lost her kids, merely acceding to the judgments of her ex-husband and the court. As the bartender puts a bottle of beer and glass on her table, a greasy lump at the bar says he’ll take care of the drink. The unsolicited offer clouds Wanda’s face; she sips her drink resigned to what it means. A rude cut takes us to a spent motel room where Wanda sleeps naked alone in pale afternoon light. The guy from the bar tiptoes around the room to leave, but he makes a noise setting Wanda to hurriedly dress herself, pointlessly calling after him to wait. The plainness of the scene’s despair tells us it’s nothing new for her.

Characterization emerges in the fluidity of situation and behavior, melancholy in an unanchored camera and stark ellipses. Once its protagonist takes up with an amateur thief who radiates nervous energy, Wanda unspools as an inverted Gun Crazy (1950), its unsentimental portrait of a female drifter looking ahead to films like Jeanne Dielman (1975), Vagabond (1985), Safe (1995), and Kelly Reichardt’s River of Grass (1994) and Wendy and Lucy (2008). Wanda screens in a restoration print as part of a bountiful overview at the Pacific Film Archive called “The Outsiders: New Hollywood in the Seventies.”

Drawing inspiration from The Last Great American Picture Show, an excellent anthology edited by Alexander Horwath to accompany an earlier retrospective at the Austrian Film Museum, the PFA series shifts the historical narrative of New Hollywood from movie brats to unnamed margins. Celebrity-driven surveys of the same period (like Peter Biskind’s Easy Riders, Raging Bulls) miss the congruence of by-the-teeth filmmaking and borderline characters that helps to define the PFA series. Ample room is made for those filmmakers whose careers couldn’t hold a straight line (Loden’s career as a director began and ended with Wanda), and familiar landmarks like Mean Streets and Badlands (both 1973) are considered alongside lesser known but no less groundbreaking character studies like Dusty and Sweets McGee (1971), Ice (1970) and The Heartbreak Kid (1972).

The swift scene of Wanda getting picked up at the bar establishes a few leitmotifs for “The Outsiders.” You notice right away that the crummy motel rooms and bars are the real thing, and that an actor’s vanity is never spared a frank look at a character’s worn down body and face. The incidental nature of the camera placement, long duration of scenes, and dispersive spread of sound deepen the melancholy reality of these appearances. A verité-style handheld camera takes single measure of the scene, registering the immediacy of behavior but stopping short of slicing up the conflict into easy points of identification (Wanda cinematographer Nicholas T. Proferes cut his teeth with Robert Drew’s pioneering documentary crew in the early 1960s). Also borrowed from observational documentary is an interest in private, semi-coherent forms of speech; the stories are as much told through gesture and movement. You constantly feel on the precipice of emotions, watching as they form and stagnate in a languid real time that makes a character’s exhaustion palpable in the theater.

Most of these movies are indeed populated by outsiders, though the meaning of the word shifts from film to film. There are plenty of figures of hedonism (memorably, Rip Torn’s hard-driving country western singer in 1972’s Payday), but so too are there close portraits of the lived differences of gender, race, class and age — Wanda, but also Killer of Sheep (1977), Bush Mama (1975), and Over the Edge (1979). Unlike Easy Rider (1969), the film typically cited as launching a hundred New Hollywood productions, these movies don’t valorize the outsider towards an obvious political morality. A film like Killer of Sheep is delicate because it recognizes the social constraints of the central character’s life while at the same time respecting the fullness of his winnowed existence. The same long-take camera style which expresses pessimism is also left open to moments of ragged beauty that escape political allegory.

The exciting vision of radical heroism offered by Sweet Sweetback’s Baadasssss Song (1971) is the exception that makes it easier to imagine how Wanda‘s brittle poetry of despair might have disappointed feminists at the time. Wanda is left alone again at the end of the film, seemingly unable to live with or without a man. There’s a glimmer of hope when another woman invites her inside a raucous roadhouse where mixed company drink and smoke and laugh as a string duo stomp out a joyful sound. But through it all Wanda remains withdrawn, eating and drinking as if someone might at any moment snatch the food out of her hands. The film ends with a freeze frame of her blank face as the music slowly drains away on the soundtrack. The shot holds a mirror up to our desire for her story to mean something, our wish for the succor of tragedy or redemption. Loden’s film instead narrows in on the insoluble nature of the character’s existence, holding the wreckage of her life in view with both pitiless reserve and tender regard.

THE OUTSIDERS: NEW HOLLYWOOD CINEMA IN THE SEVENTIES