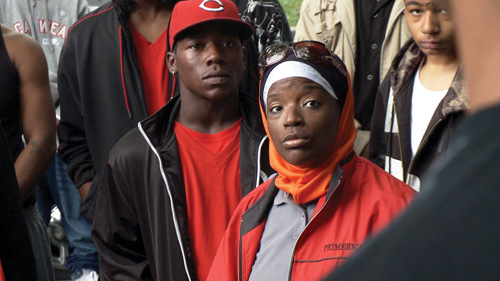 FILM Hard times and an African American man in the White House have unleashed racial hostilities on a level unseen for decades, even if most of it is (thinly) veiled. Millions of low-paid or unemployed whites who should know better from their own experiences with economic struggles view blacks as a homogenous group of “welfare cheats” (believing all welfare is cheating, unless of course you need it yourself) and violent thugs. The online rhetoric, where everyone’s ugliest prejudices can be aired from a safe place of anonymity, reveals a nation of way too many people who spend way too much time hating each other. The venom is so enthusiastic you know most of them wouldn’t want rapprochement if it came with a $50 Wal-Mart gift certificate.

With concern from society and government as a whole at low ebb, communities at greater risk of violence from within than ever have had to come up with their own peace-making solutions. The Interrupters, the latest documentary by Steve James (1994’s Hoop Dreams), shows dedicated efforts to help one of the nation’s worst centers of such bloodshed. In Chicago, the overwhelming majority of both victims and perps of gang-related, domestic, and armed robbery fatalities are African American; shooting incidents in a few neighborhoods have continued to skyrocket even as similar statistics have declined elsewhere around the country.

“Violence is like the great infectious diseases of all history,” says epidemiologist Gary Slutkin, in that it can be stopped from spreading to epidemic proportions by numerous “initial interruption(s) of transmission” at its source. He translated that perspective into the founding of CeaseFire, a Chicago-based organization that doesn’t aim to summarily end the existence of gangs and drug trade. Instead, its plain but hardly simple mission is to stop the shootings, stabbings, etc. which are exacerbated by unemployment, broken families, and other sources of stress whose cumulative effect can rapidly escalate a casual dis to a mortal confrontation. As one interviewee in James’ film says, “sticks and stones” logic doesn’t apply here because “words can get you killed.”

Under CeaseFire’s auspices, Tio Hardiman created the Violence Interrupters program, which drafts people from the community — many former gangbangers themselves — as mediators wading into conflicts to defuse them before things get out of hand. It takes considerable will and nerves of steel; “interrupters” have been shot at, and during the course of this documentary’s year-long span one volunteer lands in the hospital for his trouble.

The Interrupters‘ most charismatic figure is Ameena Matthews, daughter of legendary local crime boss Jeff Fort (now in prison for life) and a onetime enforcer herself. Now a mother and devout Muslim, she is seen fearlessly, tirelessly diving into fraught situations where few would be able to command sufficient respect to “interrupt,” let alone arrest, the path that leads from disagreement to threat to assault. She even takes the podium at (yet another) funeral to harangue the attendees about stopping the cycle of brutal retaliation slayings. It’s hardly just active gang members or even their families who are at risk — random, mistaken-identity, and bystander shootings claim an outrageous number of lives every year. (In the New York Times Magazine article that led to this documentary, producer Alex Kotlowitz noted one summer Chicago weekend in which 36 people were shot, seven fatally.)

Like much of inner Detroit — as other recent docs have observed — these Chicago neighborhoods have practically been abandoned by the larger society, considered incurable zones in terms of crime, blight, brutality, abuse, despair. If residents already rank low in a pinched job market, prospects for those who’ve returned from prison stints are subterranean.

Such frustration and anger will be channeled one way or another; constructive alternatives are damn few. But The Interrupters makes a powerful case against the inevitability of hopelessness turning into violence. The program has even seen former perps transformed to the point of returning to the scene of a crime in order to apologize. Rage is blinding; CeaseFire and its mediators prove there’s nothing like taking a step back and a clear-eyed look at oneself to achieve peace in near-impossible circumstances. “Community, heal thyself” may well have to become the American mantra of the near future, because you know the Tea Party wouldn’t mind in the least letting certain groups self-destruct.