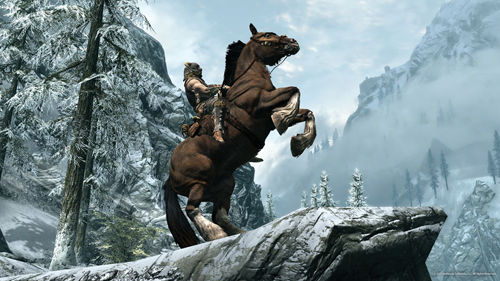 GAMER Though video game sequels abound every season, fall 2011 plays host to an unusual profusion. Three is indisputably the magic number, though five and a pair of un-numbered twos make a strong case. Decide for yourself which game deserves your dollars by delving into the details below.

Shooter wars In terms of sheer seismic impact, it’s hard to match Call of Duty: Modern Warfare 3, which hits store shelves Nov. 8. Successor to Call of Duty: Black Ops — literally the best-selling video game in the history of world — Modern Warfare 3 is the 2011 iteration in a once-yearly parade of market-dominating games released by publishers Activision. Defined, for better or worse, by its frenetic gameplay and rabid fans, Call of Duty‘s vast popularity has resulted in uncanny levels of cultural saturation. It’s the video game of choice for people who only own one video game.

This appeal to the lowest common denominator has been tacitly criticized by the team behind Battlefield 3, another hyper-realistic military shooter from rival publishers Electronic Arts. Released exactly a fortnight earlier than its megalithic competitor (Oct. 24), Battlefield 3 will point to a less puberty-addled player base and the excitement of pilotable vehicles (tanks, helicopters, etc.) as its main selling points.

Though the chivalric code of video game public relations prevents these two giant franchises from really laying into each other, the gaming intelligentsia expects a consumerist cage match come late October. By the time the first-week sales numbers are compared, they’ll be baying for blood.

Open worlds Evaluated superficially, The Elder Scrolls V: Skyrim seems like a parody of itself. Every gaming stereotype is represented, starting with the portentous title. Screenshots reveal barbarians swathed in fur, casting wary glances at the dragons wheeling overhead.

But despite its conventional high fantasy trappings, Skyrim (Nov. 11) represents the sophisticated, forward-thinking apex of modern RPG design. Its new Creation Engine allows surprising flexibility — the A.I. modifies quests on the fly to test a player’s strengths and weaknesses, and to showcase the content that player might be missing. The aforementioned dragons are given license to roam, appearing randomly to ruin your day at the expense of choreographed, scripted sequences.

Speaking of ruined days, no game will kill you quite as dead as Dark Souls. The follow-up to the cult Japanese import Demon’s Souls will expand on its predecessor’s distinctively punishing gameplay, turning players loose in an ominous open world filled with booby traps and seemingly invincible monsters. It will take unwavering concentration and an iron will to succeed when the game releases Oct. 4.

Gamers who prefer a more modern open world are gearing up for Batman: Arkham City (Oct. 18.), sequel to 2009’s surprise smash Arkham Asylum. Escaping the confines of the comics world’s most recognizable prison, Arkham City will allow the Caped Crusader freedom to explore a wide swath of dystopian Gotham, putting paid to recognizable Batman adversaries like the Penguin, Bane, Two-Face, Catwoman, the Riddler, and the Joker.

Arkham Asylum won players over with its fluid, timing-based combat system, which will return improved, able to pit Batman against 27 heavily-muscled henchmen at once without breaking a technological sweat. Fisticuffs aside, Arkham City will also allow you to swoop down off buildings with only an inky-black cape to break your fall — who wouldn’t want to try that?

Clambering up priceless ancient architecture while dispatching baddies with bullets and bon mots, Drake will take advantage of huge investments in motion capture and hardware optimization that will make Uncharted 3 one of the most realistic looking games ever. You can also expect it to set new benchmarks for video game writing and voice acting — traditional strengths of the series.

Gears of War 3 might not boast the same level of insouciant wit, but its graphical and gameplay bona fides are second to none. Due out Sept. 20, the new game from influential studio Epic Games (famed for their extensively licensed Unreal 3 engine) aims to wrap up the story of hydrant-shaped marine Marcus Fenix, who first growled his way onto consoles in 2006. The plot is conventional stuff — find your missing father; save the world — but Epic’s satisfying cover-based shooting mechanics and popular multiplayer modes will attract customers in droves.